Public Safety or Speed Traps? The Conflicts of Interest Behind Fines and Fees

If you have ever been issued a speeding ticket, you probably grumbled about the government using you as a piggy bank. In our new research report, we found that, in many cases, you were right.

We first looked closely at how much states and localities collect from all fines, fees, and forfeitures. Then we explored how many states allocate revenues from speeding ticket fines and associated fees to courts and law enforcement. We focused on speeding tickets since they are a common way individuals interact with the justice system.

The uses of those fines and fees can affect how aggressively they are collected. Policing and sentencing practices underpinning those financial penalties also disproportionately impact low-income and Black and Hispanic or Latino people.

Fines and fees have been used for centuries, often as a tool to explicitly discriminate and even enable indentured servitude. More recently, along with charges such as tolls or parking meter fees, these have been used by fiscally-strained governments unable or unwilling to raise income, sales, or property taxes. A 2015 investigation of Ferguson, Missouri by the US Department of Justice showed that the city increased fines and asked the police to write more tickets to make up for a sales tax shortfall. It also found this aggressive ticket-writing resulted in systematically-unjust practices against Ferguson’s Black residents.

Research shows that fiscal considerations can influence officers’ discretion in handing out traffic tickets. When governments allocate revenue from fines and fees to law enforcement agencies and courts, they create incentives for police officers and judges to pursue revenues, which can undermine public safety and trust.

To find out how these fines and fees are allocated, we reviewed each state’s laws and sought clarifications from officials in over 30 states and 10 cities. We then classified the way speeding ticket revenues were allocated based on whether they were earmarked for courts or law enforcement, or to general revenues or other special funds.

Most speeding tickets are divided into fines, aimed at deterring future infractions, and fees, often used to cover administrative costs.

In at least 43 states, some portion of speeding ticket revenue is distributed to courts or law enforcement. Seventeen states allocate a share of fines to courts or law enforcement funds while 39 states distribute some fees to these uses, and some do both. In most states, accumulated fees far exceed the base fines, which contributes to the high incidence of unpaid speeding tickets and outstanding court debt. 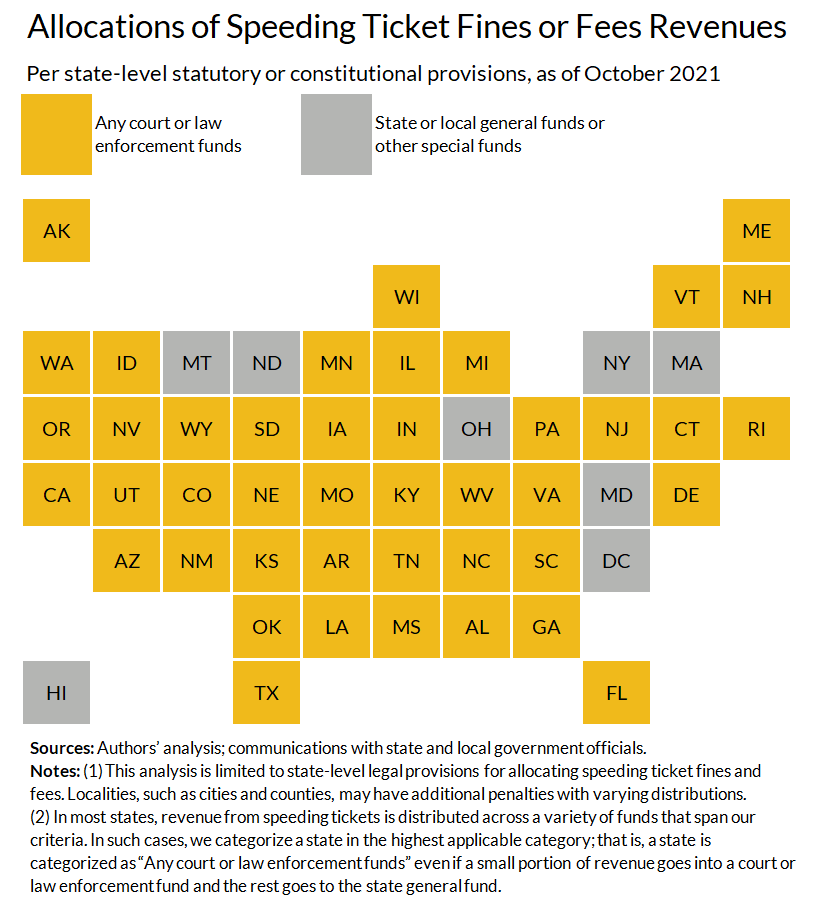 Most states that distribute fines or fees to law enforcement or courts also allocate a share of those revenues to other programs. Take, for instance, South Dakota’s $117.50 speeding ticket issued on interstate highways. The full fine – only $39 – goes to the school district in the county where the violation occurs. The accompanying fees are allocated to support law enforcement training, court automation, telecommunicator training, court appointed attorneys and public defenders, victim’s compensation, court-appointed special advocates, and neglected children. The problem: public defender or training programs, for example, may become reliant on revenue from more speeding tickets being handed out to fund their day-to-day operations, sometimes called the “broken budget model.”

A recent New York Times investigation showed that at least 20 states use traffic stop quotas as a police performance measure for federal highway safety grants. It noted how the police chief of Windsor, a small town in Virginia, reminded officers that they were “required to write a minimum of two tickets per hour while on grant time and there is zero tolerance.”

Some states have begun to reduce their reliance on fines and fees. Michigan and Oregon, for example, relaxed enforcement of penalties for nonpayment during the COVID-19 pandemic. California is piloting ability-to-pay adjudications, eliminated driver’s license suspensions for nonpayment, and shifted a greater share of fines and fees allocations to the state general fund. Federal funds from the American Rescue Plan Act provide states with extra fiscal flexibility to reexamine how they use revenue from fines and fees.

These steps fit well with the growing interest in justice reforms from federal, state, and local officials. Severing the link between revenue from fines and fees and the budgets for police and courts could be one more way for states to reduce misaligned fiscal incentives that can undermine public safety and the perceived legitimacy of the justice system.