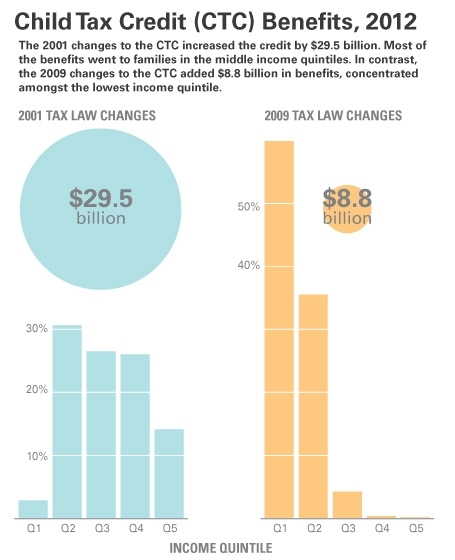 Protecting the Child Tax Credit at the Fiscal Cliff

The Child Tax Credit (CTC), a key piece of the safety net for low- and moderate-income families, is in jeopardy as the nation hurtles towards the fiscal cliff. Not only could the 2001 expansion of the credit die, but so could provisions in the 2009 stimulus that made the credit much more available to low-income families.

My biggest fear is that Congress will cut a year-end deal that extends the 2001 expansion but lets the important 2009 changes die.

To explain what’s happening, here is a bit of history: Prior to 2001, the credit was $500 per child. Families whose credit exceeded the income tax they owed could get the balance as a refundable credit only if they had at least three children and paid enough payroll tax. The credit phased out for single parents with income over $75,000 and married couples with income over $110,000.

The 2001 act doubled the credit to $1,000 per child and broadened its refundability. Families could receive 15 cents of their credit for each dollar of earnings over $10,000. (The threshold was indexed for inflation and would be about $13,000 in 2013.) Stimulus legislation in 2008 and 2009 reduced the threshold to $8,500 and then to $3,000. The more generous refundability level enacted in 2009 is critically important for low-income families. 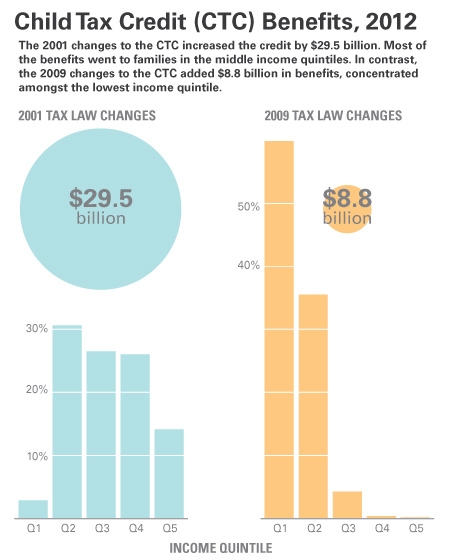 Of the $38.3 billion in total child credits that TPC estimates families will claim this year, $29.5 billion comes from the 2001 tax law and another $8.8 billion from the 2009 stimulus. Most of the 2001 increase will go to families in the middle income quintile and higher (see chart). Families with the lowest incomes will get less than 3 percent of the 2001 increase. In contrast, fully 60 percent of the benefits from the 2009 changes will go to families in the lowest income quintile.

As we near the fiscal cliff, Congress should keep in mind the entire package of CTC changes, noting that the 2009 ARRA changes matter most for very low-income families.