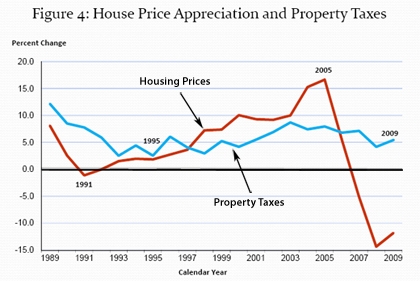 It is not news that state tax revenues have been absolutely hammered in the current economic downturn. But you may be surprised to learn that one local tax has held up relatively well.  It is, of all things, the property tax.  How can that be, you ask, if so much of the economic mess was caused by a collapse of a housing bubble?

Last week a conference on the housing crisis and its impact on state and local governments took a close look at why.

In part, it’s because the dog hasn’t barked yet. Nationally, property tax revenues have yet to fall (see graph) both because the levy tends to be backward-looking (it takes a while for assessed values to catch up with reality on both the upside and the downside) and because local governments can raise rates. The strength of the property tax was the main driver of the small positive growth in overall state and local taxes for the fourth quarter of 2009.  This was a theme in many of the presentations.  New research by Byron Lutz, Raven Malloy and Hui Shan illustrates that house value declines don’t necessarily lead to lower property taxes, and when they do, it can take a while. With luck, by the time property taxes do dip, sales and income taxes will be recovering. The good news is that if property taxes could stand up in this recession, which was both deep and caused by a housing collapse, they can stand up to most crises. 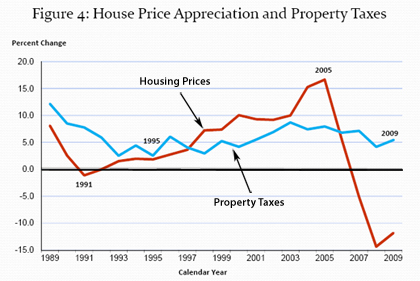 Before getting too optimistic, keep in mind that Lutz, Malloy and Shan also found the housing decline affected other taxes (including sales taxes on construction goods and real estate transfer taxes). But the effects were not consistent across the country.  These taxes fell by a lot in markets in , , and , but not in others. Both the depth of the problem and the response of state and local governments varies widely among both regions and governments. The lesson for Congress is that not every place necessarily needs federal aid to balance its budget or keep from laying off public sector employees.

One final lesson from the conference was that government spending is remarkably sticky and cutting state services will be tough to do. States struggle to do more than trim around the edges of long-standing spending programs.  Deviating from these patterns will require making hard choices.

Unfortunately, states may be facing a new normal. Budgets may be out of balance for the next 4-5 years and even when tax revenues recover, they won’t return to pre-recession levels. We may be entering a period when aggregate tax revenues will grow just 1 or 2 percent annually rather than the 6 percent rate we’ve seen over the last 20 years. Stable property taxes have helped keep matters from being much worse, but state and local governments face some difficult choices in coming years.