Pandemic Bill Would Cut Taxes by An Average of $3,000, With Most Relief Going to Low- And Middle-Income Households

According to a new analysis by the Tax Policy Center, the Senate version of the American Rescue Plan (ARP) would reduce federal taxes in 2021 by an average of $3,000 and raise after-tax incomes by 3.8 percent. Families with children would get an average tax cut of more than $6,000 under the bill, which now goes to the House for final approval.

Simply in terms of whose taxes are cut, the bill is in stark contrast to the 2017 Tax Cuts and Jobs Act. In 2021, low- and moderate-income households (those making $91,000 or less) would receive nearly 70 percent of the tax benefits from the Senate measure. Among families with children, those low- and middle-income households would get nearly three-quarters of the benefit. By contrast, nearly half of the TCJA’s 2018 tax cuts went to households in the top 5 percent of the income distribution (who made about $308,000 that year). 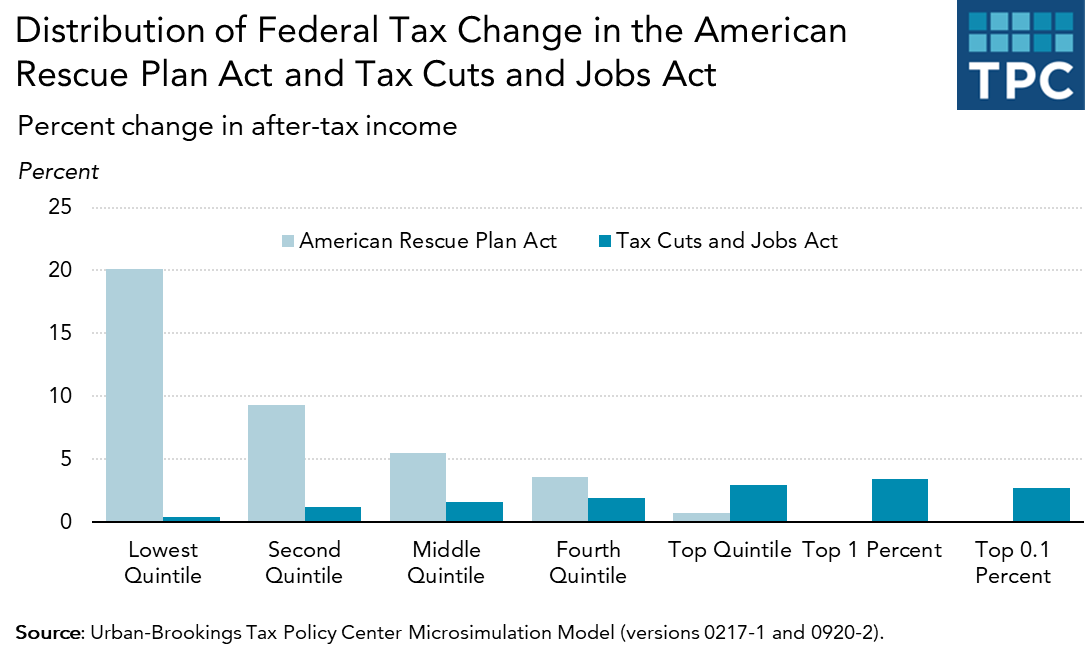 TPC modeled the major individual income tax provisions including the economic impact payments (EIPs, aka stimulus payments) of up to $1,400 per person as well as expansions of the Child Tax Credit (CTC), the earned income tax credit (EITC), and the child and dependent care tax credit (CDCTC). In this analysis, TPC did not model corporate tax changes, relatively modest tax subsidies for health insurance coverage for laid-off workers, paid sick and family leave, or an expanded Premium Tax Credit for health insurance purchased on the individual exchanges. TPC also did not model the income tax exemption for some unemployment benefits received in 2020.

The Senate’s average tax cut in 2021 is nearly double the average $1,600 tax reduction for 2018 from the TCJA,  according to TPC. The gap between the Senate bill and the average individual income tax cuts only of the TCJA is even bigger—about $1,800.

One key difference between the two measures is that the individual income tax cuts of the TCJA were scheduled to run for eight years—through 2025. By contrast, the tax cuts in the ARP either are one-time, such as the new round of economic impact payments, or scheduled to expire at the end of this year. The congressional Joint Committee on Taxation estimates the Senate bill would cut taxes by about $467 billion in 2021, and about $590 billion over the 10-year budget window.

By far the single biggest tax cut in the Senate bill is the next installment of the direct EIPs. They cut household taxes by an average of about $2,300, representing more than two-thirds of the overall tax cut. While the expansions of the refundable tax credits such as the CTC, EITC, and CDCTC all are temporary, Democrats have made little secret of wanting to make them permanent.

The other major difference with the TCJA, which was passed by the Republican Congress and with the support of then-President Trump, is the distribution of the tax cuts. The ARP, passed only with Democratic votes, distributes more than two-thirds of the tax cuts to low- and middle-income households while they received only about 17 percent of the TCJA’s tax benefits.

$7,700 for low-income families with children

As they say, elections have consequences. And few bills show that contrast as much as the Republican’s TCJA and the Democrats’ ARP.