Only About One-Quarter of Corporate Stock is owned by Taxable Shareholders.

Only about one-quarter of U.S. corporate stock is held in taxable accounts, far less than most researchers and policymakers thought. The share has declined sharply from more than four-fifths in 1965. In a report published today in the journal Tax Notes, my Tax Policy Center colleague Lydia Austin and I found the other three-quarters of shares now are held in tax-exempt accounts such as IRAs or defined benefit/contribution plans, or by foreigners, nonprofits or others. 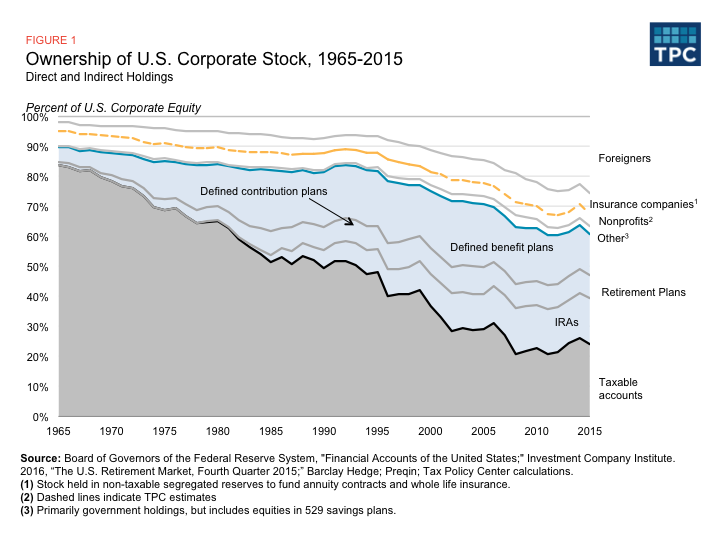 The second is the increase in portfolio investment by foreigners, which now represents about 26 percent of U.S. corporate stock. The foreign share would be greater if we included foreign direct investments, which are controlling interests in U.S. corporations. Foreigners generally pay no U.S. tax on capital gains from their sale of U.S. corporate stock, and the U.S. withholding taxes they pay on dividends are often reduced greatly by treaty.

This decline in stock ownership by taxable investors has been hard to spot since it is not obvious in data published by the Federal Reserve and others. As a result, most analysts have calculated that at least half of U.S. corporate shares are in taxable accounts, twice the level we calculated.

The sizable decrease in the taxable shareholder base affects many of the current tax policy debates, including how to structure a revenue-neutral corporate integration regime, and more generally, how we tax capital. I plan to testify on the implications of our calculations to business tax reform at a hearing of the U.S. Senate Finance Committee tomorrow.