President Obama proposed three important changes to the way the federal government helps families with child care costs – increase direct subsidies for low-income families, increase tax credits for middle- and higher income families, and simplify the tax code (and offset some of the cost of the other changes) by eliminating flexible spending accounts for child care.

Let’s start with low-income households. As currently constructed, the CDCTC is non-refundable. It offsets only the taxes a family owes. Low-income families often owe little or no income tax and thus can’t take full advantage of the nonrefundable credit.

On paper, parents who work or go to school are eligible for a credit as high as 35 percent up to $3,000 ($6,000 for two or more children) for children under age 13. Families with incomes below $15,000 qualify for the maximum credit, which falls to 20 percent for families with incomes of $43,000 or more. Trouble is, the higher credit rates are largely elusive: Many families that might otherwise qualify typically owe no tax, and thus receive no benefit at all from the nonrefundable CDCTC.

In the past, others have proposed to fix this problem by making the credit refundable. But that idea died on Capitol Hill.

Besides the political hurdles, it’s not clear that tax subsidies are the best way to help low-income households. Direct subsidies often work better than tax credits. Families receive benefits when they incur expenses rather than having to wait until they file their tax returns, sometimes many months later. I made the case for increasing direct subsidies when I discussed a proposal to amend the CDCTC last year.

Thus, rather than again asking Congress to make the dependent care credit refundable, the President has proposed boosting direct assistance for child care costs so that within ten years, all eligible families with children under four years of age can receive the subsidies they qualify for (unlike today, when many eligible families get turned away).

The president has a different solution for delivering benefits to middle- and higher-income families. For those families it makes more sense to use the tax system since it is a way to provide assistance without involving another government agency.

Obama’s proposal would expand the CDCTC for families of young children by increasing the top credit rate from 35 percent to 50 percent, increasing allowable expenses from $3,000 per child ($6,000 per return) to $6,000 per child ($12,000 per return), and not phasing down to the minimum credit of 20 percent until income reaches $178,000. As a result, the maximum allowable credit for all families with young children would rise. Many families with children ages 5 – 12 would see their CDCTC increase because the credit phase out would start at much higher incomes than under current law: the minimum credit rate of 20 percent would not be reached until income reached $148,000 (see table for a comparison of today’s law and the proposal and figure for comparison of maximum benefits). 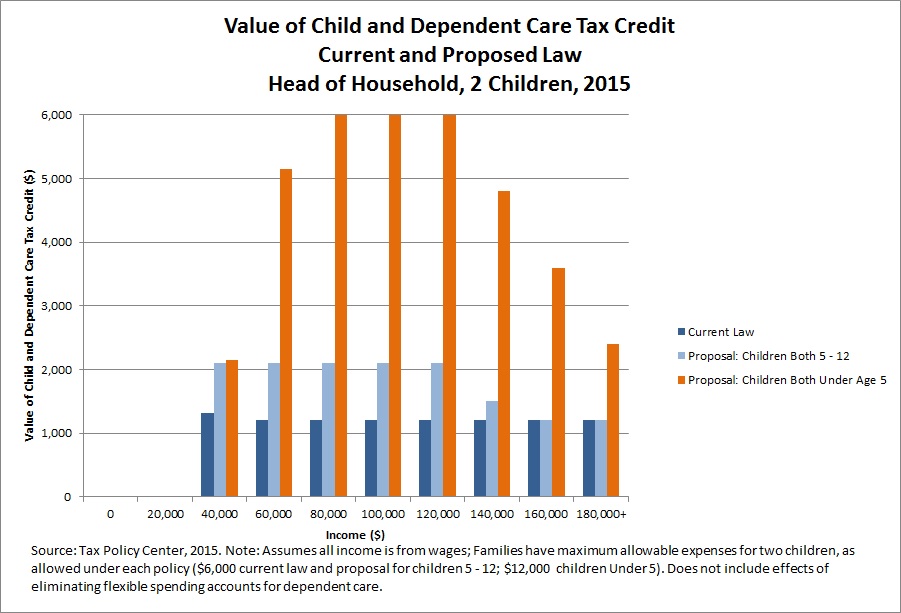 Obama would also eliminate flexible spending accounts for child care, another idea with merit. Under current law, families may exclude up to $5,000 of child care expenses from taxable wages. If a family has at least two children, they can exclude $5,000 and claim a CDCTC for up to $1,000 of additional child care expenses. The IRS reports that 1.2 million tax returns had salary reductions for dependent care benefits in 2010, totaling $4.3 billion (an average of $3,456 per return).

Obama would simplify matters by requiring families to apply all of their allowable expenses toward the credit while eliminating the FSA benefit. Many families with child care expenses would come out ahead on balance because of the generally higher credit rates under the proposal, but high-income families, particularly those with one child 5 or older, would likely owe higher taxes.