In a new paper, I propose a universal earned income tax credit (UEITC)—a one-for-one match on the first $10,000 of earnings delivered through a refundable tax credit. It’s like the existing earned income tax credit, but it is bigger, doesn’t phase out, and is available to every worker regardless of marital status or household income. Workers could have the credit added to their paychecks or collect it as a lump sum when they file their tax returns. Like other earnings, the UEITC would be subject to income tax. My proposal would also increase the child tax credit from $2,000 to $2,500 and make it fully refundable.

The UEITC effectively would end poverty among the working poor. It would increase incomes for single people working full-time at the current minimum wage from about $14,000 to $24,000. It would boost incomes for a couple working full-time at the current minimum wage to $48,000. Thus, even at the lowest rungs of the economy, a two-earner couple could attain a middle-class income. Families with children would get the additional supplement of the expanded child credit.

The maximum UEITC would be indexed to changes in GDP (instead of being indexed to changes in the price levels). So, if the economy grew by 5 percent, the maximum credit would increase to $10,500. For the first time since the 1980s, working class families would fully share in the gains from economic growth. This change could bolster support for pro-growth economic policies like freer trade and more open immigration.

So, why not a universal basic income (UBI)? Mainly, because every adult, even those who don’t work, would be eligible for a UBI while my proposed credit is available only to workers. (The credit could also be extended to stay-at-home parents and other caregivers.) Most voters believe that people who work hard to help themselves and their families deserve public support, while they tend to be less sympathetic to able-bodied people who are out of the work force.  Also, work activity is good both for adults —who develop valuable skills and self-esteem—and for their children, as discussed in the paper.

While I’m skeptical of the “basic income” part, the “universal” part of UBI is a very good idea. Americans like programs that help people like them, while narrowly targeted programs are more apt to be disparaged as “welfare.” Universality has been a key to the overwhelming support for Social Security and the lack of resistance to the regressive payroll tax that finances it.

The main drawback of any universal program is the expense. My proposal would cost about $1.3 trillion per year when fully phased in in 2023, but I’d propose to fully fund it with a very broad-based 11 percent value-added tax (VAT).  It is an efficient tax that imposes little drag on the economy. And, because spending tends to grow with the economy, VAT revenues would grow as well, making the program fiscally sustainable. Because everyone would pay the VAT, it would answer conservatives’ critique that low income people don’t have “skin in the game.”

Some progressives dislike that a VAT is regressive, taking a larger share of income from the poor than from the well off. That’s true, but the combination of the VAT plus the UEITC plus the bigger child tax credit would be highly progressive (see Table). My proposal would raise after-tax income for the bottom 20 percent of households by nearly one-quarter, and for those in the middle by nearly 5 percent. People at the top would pay more—the top 0.1 percent would face an average tax increase of $588,040 in 2023. 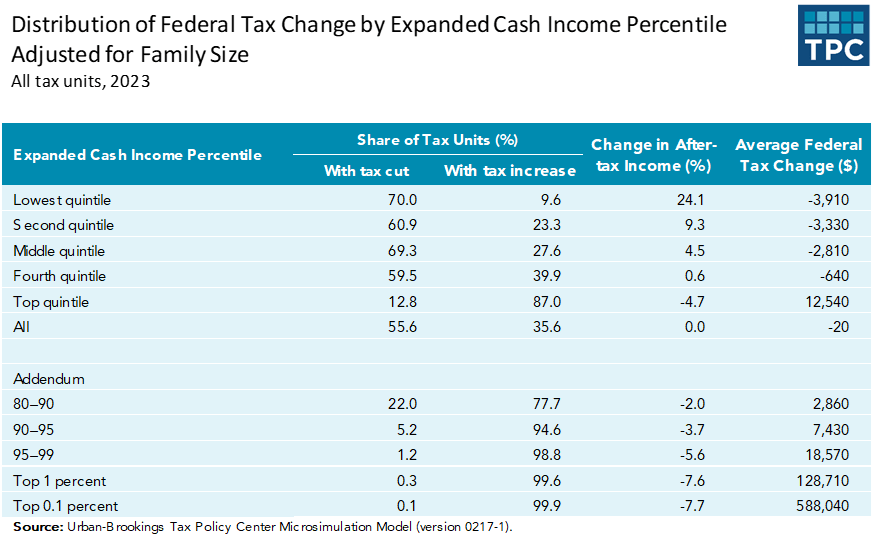 The UEITC plus a VAT may not be the only solution to middle-class wage stagnation. Several more incremental options have been proposed in Congress. But if policymakers are looking for a big idea that would reduce inequality, promote work, support families, and not add to our burgeoning deficits or harm the economy, this proposal is worth a look.

CTC
EITC
UEITC
UBI
Universal Basic Income
workers credits
What is a Universal EITC?
What is a UEITC?