The Inflation Reduction Act (IRA) approved by Congress last week included a new 1 percent stock buyback excise tax on US publicly traded corporations. Many of these companies now spend their excess cash to repurchase stock from their shareholders, rather than pay dividends or invest more in their firms. The new tax will discourage repurchases of stock and encourage dividend payments. As a result, it will increase US tax receipts from foreign investors, who do not pay US capital gains tax when they sell stock but are taxed on dividends they receive.

Starting next year, companies will pay the tax on the fair market value of stock they repurchase, net of any new equity they issue. The congressional Joint Committee on Taxation (JCT) estimated the buyback tax would raise $74 billion over the next 10 years, the bill’s second largest revenue raiser after the corporate minimum tax.

Over the last twenty-five years, corporate buybacks have exploded (e.g., in the first quarter of this year, S&P 500 companies reported $281 billion of buybacks, a new record). They also regularly surpass dividend payments. Over the last 25-year period, the ownership of publicly-traded US stock by foreign investors also rose rapidly. They now own almost 30 percent of publicly-traded US stock, more than three-times what they owned at the start. 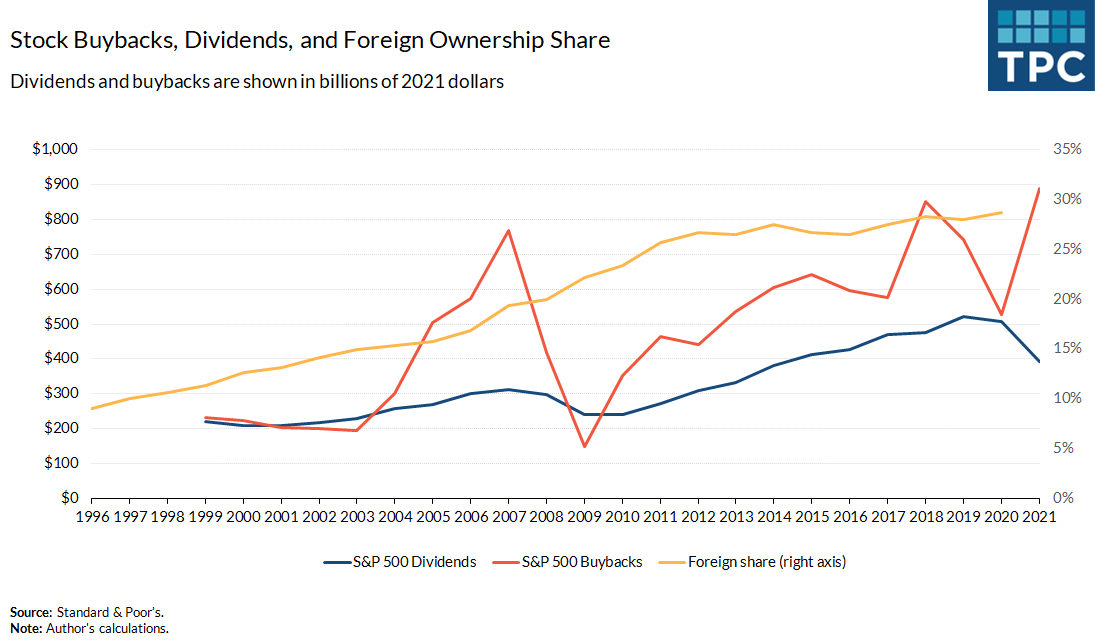 For example, if a US publicly traded corporation spent $10 million of its extra cash to repurchase its stock in the open market, foreign investors would pay no US tax whether they sold in the buyback or later. But if the corporation paid $10 million in dividends, the foreign investors generally would pay a 30 percent tax on the payout (or 15 percent, under some treaties). As a result, foreign shareholders strongly prefer stock buybacks over dividends.

There also is a smaller tax preference for buybacks by some US taxable shareholders. But most US shareholders, like 401(k) and other retirement plans, are tax exempt, and indifferent between buybacks and dividends.

Both Republicans and Democrats in Congress have been troubled by stock buybacks. Several years ago, Sen.  Marco Rubio (R-FL) proposed to treat buybacks as dividends for income tax purposes. But Senate Democrats preferred the excise tax, a simpler approach, to discourage corporate buybacks.

Some Democrats believe it would encourage “worker training, research, modernizing equipment and other [investment] activities.” However, it’s unclear whether taxing, or even prohibiting, buybacks will increase investment in US workers and factories. That’s because corporations that distribute earnings to shareholders, either in the form of dividends or buybacks, generally do so because they cannot find attractive investments.  And, if a corporation will not repurchase its stock, it still can pay dividends.