There has been considerable confusion about how to describe the treatment of international taxation in corporate tax reform plans. The House GOP blueprint, for example, has been labeled a destination-based tax because it exempts exports and taxes imports, but the plan’s authors call it a territorial tax.  And business leaders and politicians often complain that the United States is the only country with a worldwide tax, although our system is a hybrid of the worldwide and the territorial models.

Here’s what these terms mean, as illustrated in the table below.  Under a territorial tax, all corporations -- those based in the US (US-resident companies) and abroad (foreign-resident firms) -- would pay US income tax on revenue from US investments (US-source income). But they’d all be exempt from tax on income from foreign investments (foreign-source income).  Tax liability would depend only on where the goods and services are produced, rather than on the legal residence of the corporation or where its goods are services are consumed. 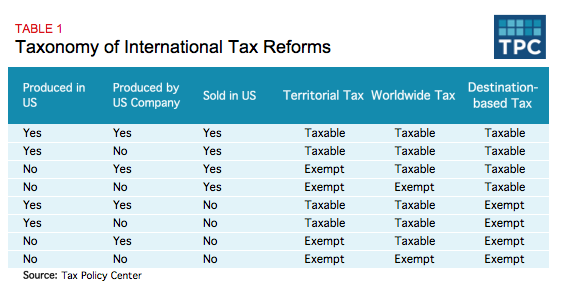 Under a worldwide tax both US- and foreign-resident corporations would pay US tax on their US-source income. In addition, US corporations would be taxed on their foreign-source income, though they can get relief from double taxation by claiming a credit for foreign taxes they pay on that overseas income. Thus, they would only face the US tax rate.

As with a territorial system, tax liability would not depend on where goods are consumed.  In contrast to a territorial tax, however, the taxes that US corporations pay would not vary with the source of the company’s income.  US-resident companies would be taxed on income earned outside of the United States, though foreign resident firms would not.

A destination-based tax differs from both a territorial and a worldwide system.  US tax liability would depend on where goods and services are consumed rather than the residence of the company that sells them or the source of its income. Companies would pay US tax on profits from sales for consumption in the US no matter where the goods are produced or by whom.

The current US corporate income tax is a hybrid that combines elements of worldwide and territorial taxation.  Domestic-source income of both US and foreign-resident companies is taxable, but most foreign-source income of US companies is taxable only when it is repatriated through dividends to the US parent company (a provision called deferral) and with a credit for foreign income taxes paid.

The combination of deferral and foreign credits makes the US system look much like a territorial system.  However, in practice, both US- and foreign-resident companies avoid tax on much US-source revenue by shifting reported income to low- or no-tax jurisdictions. Thus, the US system falls far short of true territorial taxation.

Value-added taxes (VATs) are imposed on domestic production in 150 countries around the world. They are destination-based because they exempt exports and tax imports. VAT liabilities do not depend on where goods or produced or on the residence of the producer. While the House blueprint insists it is not a VAT, it is a destination tax for the same reason a VAT is.  And while the authors describe it as a territorial system, it is not because it would tax foreign-source income of US corporations from goods imported into the US.

Proponents of destination-based taxes argue that they would be much harder to avoid than territorial taxes, which can be reduced by income shifting, or than worldwide taxes, which can be avoided by inversions and other ways of changing residence. In contrast, corporations are unlikely to forgo sales to the large US market to avoid corporate income tax.

These labels can be confusing and are often misapplied. But the differences among these systems can be politically and economically significant.

FILE - In this Wednesday, Dec. 7, 2011, file photo, a person stands near the Apple logo at the company's store in Grand Central Terminal, in New York. The European Union’s crackdown on corporate tax avoidance has landed on Apple with its demand that the U.S. tech giant pay Ireland up to 13 billion euros ($14.5 billion) plus interest in back taxes. The ruling, announced Tuesday, Aug. 30, 2016, is the highest profile move yet in the EU’s battle to have international companies pay their fair share of EU taxes. (AP Photo/Mark Lennihan, File)