While the Unified Framework announced by the Trump Administration and Congressional leadership last month would not repeal the home mortgage interest deduction (MID), other provisions in the proposal would make the deduction irrelevant for all but a small fraction of homeowners. Only 4 percent of households would claim the deduction, down from 21 percent under current law (Figure 1). The effective subsidy rate (tax savings as a percentage of mortgage interest) for those who still claim the MID would fall by nearly half—from 22 percent to about 13 percent (Figure 2). 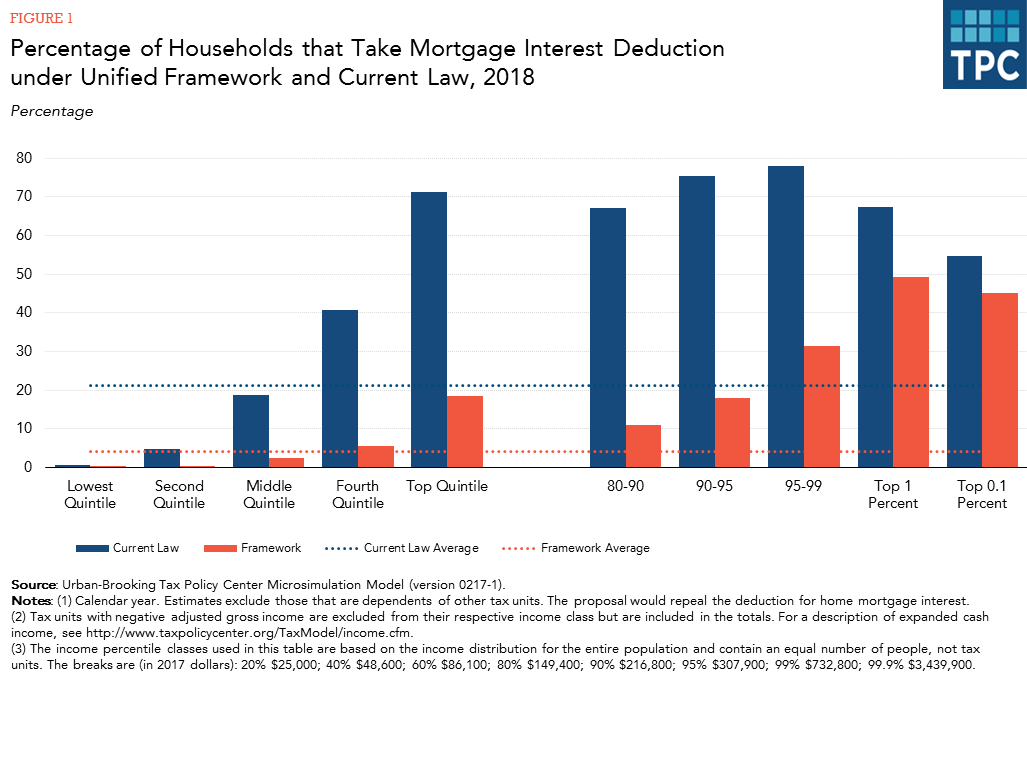 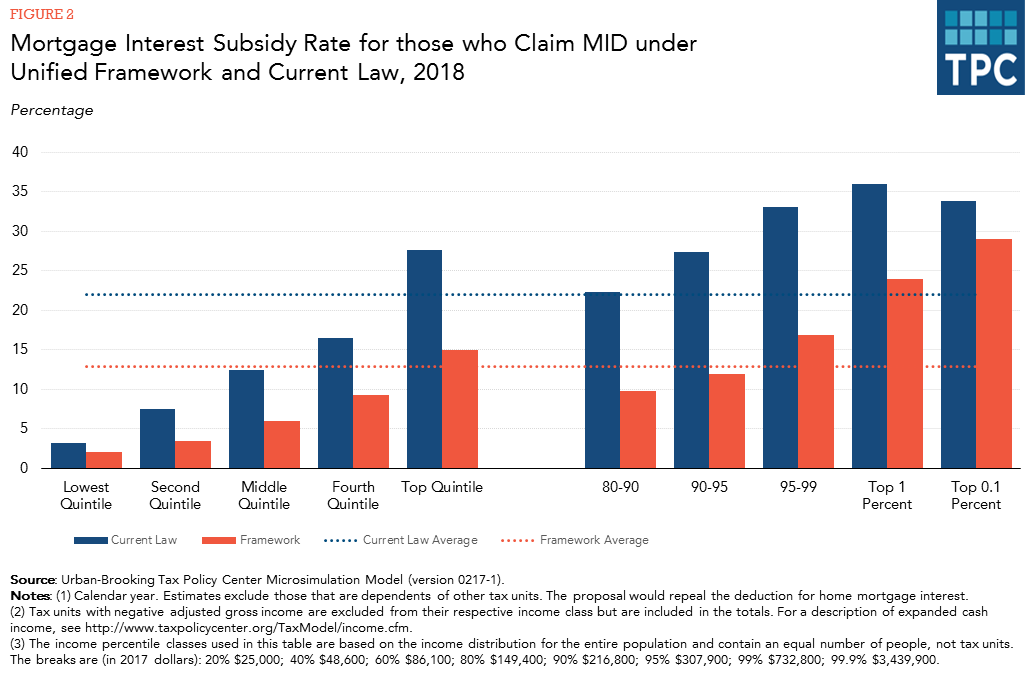 The proposal would reduce the net economic value of the MID in several ways.  First, in 2018 it would increase the standard deduction from $6,500 to $12,000 for single filers and from $13,000 to $24,000 for married couples filing jointly. Any household with total itemized deductions below those new thresholds would benefit from taking the standard deduction.

Second, the proposal would eliminate all itemized deductions except for mortgage interest and charitable donations. If homeowners cannot deduct state and local income, sales, and property taxes, the remaining deductions will fall short of the standard deduction for all but the very wealthy and the very generous. As a result, we estimate that only 4.5 percent of households would itemize under the plan—compared with 26.6 percent under current law (not shown in the figures). (Note that households include nonfilers. Limiting the sample to those who file income tax returns—as the IRS does in reporting filing statistics—would produce slightly higher percentages.)

Finally, our analysis assumes that the framework would shift many filers to lower income tax brackets—although some would face higher rates (the Unified Framework itself does not specify income tax brackets but we assumed they would track those in the House Leadership’s 2016 “Better Way” proposal).  As a result, the value of deductions would decline for many since deductions are valued less at lower tax rates.

Even for those who continue to itemize, the MID may be worth much less than many homeowners believe.  This is because net tax savings depend not only on whether mortgage interest plus other deductions exceed the standard deduction, but by how much.

But, if they were unable to claim a mortgage interest deduction, they’d have only $11,000 of allowable expenses to deduct so they would claim the $13,000 standard deduction instead of itemizing.

If Congress repeals the state and local tax (SALT) deduction, this couple’s itemized deductions would be only $7,000, from mortgage interest and charitable contributions, far short of the standard deduction.

Overall, the implied tax subsidy rate for those who can claim the mortgage interest deduction would average less than 10 percent for the bottom 90 percent of the income distribution (and would be zero for the 90+ percent of those households that would not itemize). Given that the homeownership rate is currently 63 percent, the share of homeowners that would get any tax benefit from the MID would fall from about one-third to just 6 percent.

To be clear, like most economists, I am no fan of the MID. By favoring housing over other investments, the current tax code channels too much scarce capital into the housing sector. It also hurts low- and middle-income homeowners and renters by increasing housing demand and driving up prices while providing them with little or no tax benefit. Curtailing the MID could make housing a little more affordable.

However, realtors, home builders, and lenders are lobbying for relief. Ways and Means Chairman Kevin Brady (R-TX) has hinted that a final tax bill might extend the mortgage and charitable deductions to non-itemizers. This could significantly add to the cost, even further benefit homeowners, and drive up prices for new buyers. Other lawmakers would allow homeowners to choose between the mortgage interest and property tax deductions, an idea that would add complexity and incoherence without providing much net tax relief.

If policy makers wish to retain a subsidy for homeownership, they’d be better off replacing the mortgage deduction with a  capped tax credit against the costs of home purchase, as proposed by Bill Gale.

The bottom line: the Unified Framework, by substantially increasing the standard deduction and repealing many itemized deductions, would substantially reduce the overall value of the MID, and make it irrelevant for nearly all homeowners, even if it stays on the books.