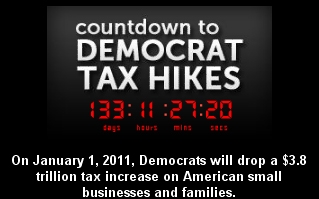 Misrepresenting the Bush Tax Cuts, or the Return of Death Panels

The story goes that when Lyndon Johnson was losing his first congressional election he put out the word that his opponent was having sex with barnyard animals. An aide innocently warned Johnson that this wasn’t true. “Make the SOB deny it,” LBJ was said to have replied.

If you go to the Website of House Ways & Means Republicans, you will see this: 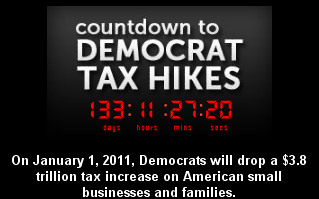 Meanwhile, Fox Business is running a graphic that includes another one of these ominous digital clocks, this time counting down to what it calls “the largest tax hike ever.” 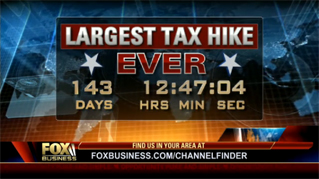 All this drama is about the coming expiration of the Bush tax cuts, of course. But what else do these two allegations have in common? They are both utterly untrue.

To start, not a single important Democrat favors letting all the Bush tax cuts expire at the end of the year, as the Ways & Means Republicans allege. Ever since his campaign for president, Barack Obama has vowed not to raise taxes for anyone making $200,000 or less—a pledge I wish he had never made, but one he has nonetheless kept. His 2011 budget explicitly calls for extending nearly all of those tax cuts (except for the highest-earning 3 percent of taxpayers). Finance Committee chairman Max Baucus (D-MT), Senate Democratic leader Harry Reid (D-NV), House Speaker Nancy Pelosi (D-CA) and Ways & Means Committee chairman Sandy Levin (D-MI) all favor continuing the tax cuts, at least for the middle-class. Relative to current law, this would cut taxes by $3 trillion over 10 years. So to say that “on January 1, 2011, Democrats will drop a $3.8 trillion tax increase on American small businesses and families” is--not to put too fine a point on it--a lie.

The there is the matter of whether allowing all the Bush tax cuts to expire, would, in fact, be “the largest tax hike ever.”

By any fair measure, that’s not true either. To be sure, it would be a very big tax increase, raising revenues by about 2 percent of Gross Domestic Product. But the biggest ever? Not by a long shot. Back in 2006, Jerry Tempalski at the Treasury Department measured the relative size of all major tax bills just since 1940 (which fits pretty well into the definition of “ever.”).

This is what he found: The Revenue Act of 1941 raised taxes by an average annual rate of 2.2 percent of GDP, more than the impact of letting all the Bush tax cuts expire. The Revenue Act of 1942 was even bigger. It raised taxes by a whopping 5 percent of GDP. Remember, we used to pay for our wars in the old days, instead of leaving the bill to our grandchildren. And, in case you were wondering, the three major tax increase bills signed by President Reagan-- TEFRA of 1982, the Social Security Amendments of 1983, and the Deficit Reduction Act of 1984--raised taxes by a combined 1.6 percent of GDP, not much less than what we are yelling about today.

Now, there is nothing new about this “biggest tax cut ever” canard. Republicans said it about President Clinton’s 1993 tax increase (which actually raised taxes by 0.63 percent of GDP). They trotted it out again in their campaign against Obama’s health bill. Myron Ebell at Human Events probably wins the breathless rhetoric award, however. He called last year’s House energy bill the “the biggest tax increase in world history.” Whew.

This isn’t to say Democrats won’t stoop to their own overheated hyperbole. Just listen to what some on the left say about efforts to reform Social Security. But there ought to be limits to this stuff, even in Washington. Words still mean something and just as Republicans went far over the line last year with their accusations about death panels in the health bill, they are doing it again this year with taxes. They should be ashamed.