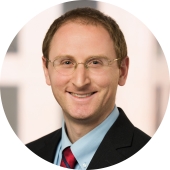 From July to December, the IRS delivered advanced payments of the 2021 expanded child tax credit (CTC) to the families of over 61 million children. Most received half of their credit but will need to file a tax return to get the rest. However, a new Urban Institute survey finds that some eligible families, especially those who did not receive the advance payments, may not file a tax return this year and will therefore miss out on the credit entirely.

New survey data show that among people with children who received the payments, just 2 percent report they don’t plan to file a tax return. But among those who did not get advance payments, the share jumps to 14 percent (about 1 in 7) and even higher for families with very low incomes. Most at risk of missing out on the expanded CTC because they don’t plan to file tax returns are families with lower incomes, unmarried adults, and people who are nonwhite or Hispanic.

The tax filing season already is underway. But the IRS, advocates, and other government agencies should continue to encourage eligible families to file tax returns this year, including those who did not receive advanced payments and are at risk of getting no credit.

Because most families with children do file annually, the IRS was able to send them advance CTC payments starting as early as July. And the Urban Institute’s December 2021 Well-Being and Basic Needs Survey found nearly all these families plan to file a tax year 2021 return this spring. Those that don’t will forego half their credit.

But families who did not receive the advanced CTC risk much more. Many did not file in 2019 or 2020 and may be unaware that filing comes with new benefits this year.

In the Urban survey, about one in seven adults with children under 18 who did not receive advance CTC payments in 2021 reported they were not planning to file a tax return this year. The share rises to almost one in four for those families with income below twice the federal poverty level, or about $22,000 for a family of three. Those who fail to file will forfeit their entire 2021 credit of up to $3,000 per child ages 6 to 17 and $3,600 per child under age 6.

Among adults with children under 18 who report not receiving the CTC, 21 percent of nonwhite or Hispanic adults are not planning to file a tax return compared to less than 8 percent of those who are White. Single adults are nearly twice as likely to not plan to file a return than those who are married (19 percent versus 11 percent). 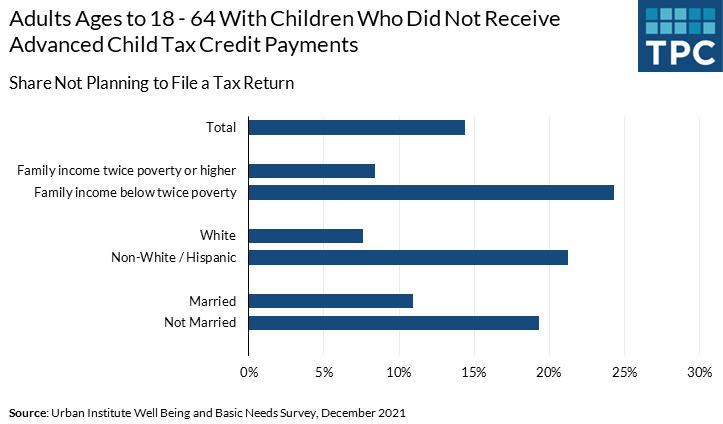 Focus groups find that those who have not received the CTC often failed to apply because they believed they were ineligible. Among the reasons they thought so: They are immigrants, receiving other benefits, are unemployed, or did not previously file a tax return. Others said they were confused about the application process for those who did not receive the payment automatically, or concerned they might lose child support payments or have to repay the credits to the IRS.

Some families with children will file a tax return for the first time this year, largely to claim the CTC.  Clear communication from benefits agencies that address these concerns could encourage more families to file a tax return and claim the CTC, just as it encouraged them to claim the advanced monthly benefits. Understanding what encouraged first time filers to file a tax return could also provide important lessons for additional outreach. Long-term, making filing as simple as possible might be the best way to assure that all people eligible for tax benefits receive them.