The US is the only country that allows the tax-driven LIFO accounting method. International financial reporting standards (IFRS) allow only FIFO or average cost methods, which better reflect a company’s financial position. The US has taken steps in recent years to conform its accounting standards with IFRS, but full convergence does not appear likely.

The LIFO election is subject to certain restrictions. A company electing LIFO for tax purposes must also use it for financial accounting, which usually results in lower earnings reported to shareholders. However, companies electing LIFO also report LIFO reserves—the difference between inventory valued by the LIFO and FIFO methods. This enables investors to adjust for the negative earnings impact.

Also, companies that switch from LIFO to FIFO must take the value of LIFO reserves into income over 5 years. And once a company elects a tax accounting method, it cannot switch back for at least 5 years.

LIFO use, once widespread, declined over several decades as inflation and corporate income tax rates fell, reducing LIFO’s tax benefits. LIFO use is now concentrated among large companies in a few industries with large inventories. Although C-corporations account for less than 40 percent of US net business income, they receive about 80 percent of LIFO tax benefits.

The petroleum industry is by far the largest beneficiary, although its share of LIFO reserves fluctuates with oil prices. A recent study shows the petroleum industry share of LIFO reserves varied from 27 percent to 65 percent from 2011 to 2016, with an average value of 50 percent. Other major beneficiaries of LIFO include chemical and equipment manufacturing and wholesale and retail trade. 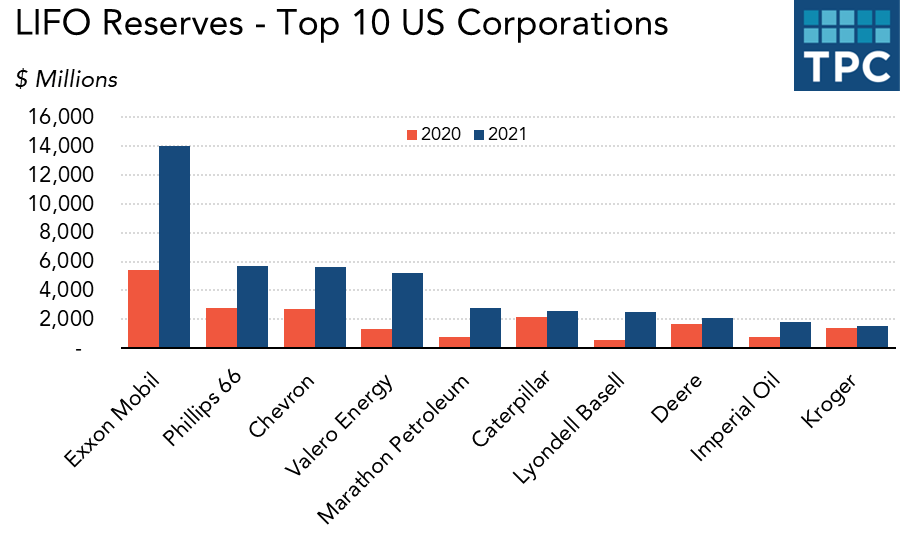 In a falling price environment, such as oil companies experienced from 2014 to 2016 and again (briefly) in 2020, LIFO understates deductions and overstates earnings and tax liabilities. The 2014 oil price collapse caused many oil companies to draw down their LIFO reserves and pay higher taxes while earning lower profits.

Supply chain disruptions resulting from the COVID pandemic have also forced some companies, notably auto dealers, to draw down their inventories. This depletes their LIFO reserves and inflates their taxable income, leading to calls for legislative relief.

Repealing LIFO has two separate revenue effects. Eliminating the LIFO option would raise about $1 billion annually by reducing companies’ cost-of-goods-sold deduction. But repealing the method could raise substantially more revenue by taxing accumulated LIFO reserves. Because these reserves can be substantial, most proposals for LIFO repeal would allow firms to pay tax on existing reserves over four or five years.

At the end of 2020, the Congressional Budget Office estimated that taxing LIFO reserves would raise approximately $50 billion, which the option they analyzed would spread over four years. But given the recent surges in inflation and oil prices, repealing LIFO now could raise substantially more.

The Obama Administration supported LIFO repeal, and the Senate Finance Committee has also considered the reform. Given the oil industry’s record profits and concerns about addressing global climate change, now may be an ideal time to repeal the expensive and inefficient LIFO tax preference.