How Would the Kansas Senate Close the State’s Budget Gap? Mostly by Taxing Poor People

Kansas is grappling with a self-inflicted budget crisis. In 2012 and 2013, the state decided to experiment with major income tax cuts and an exemption of most small business and partnership income aimed at boosting the economy. The experiment is not going well to say the least.

Now, faced with a serious budget gap and the possibility of court-ordered increases in education funding, lawmakers are scrambling to raise revenue. The $423 million package proposed by the Senate backpedals on some of the previous income tax cuts but is made up of mostly regressive tax hikes.  While the Senate bill was overwhelmingly defeated in the House, it is similar to Governor Sam Brownback’s proposal and key elements are likely to be included in any final deal.

Almost half the revenue, $188 million in 2016, would come from increasing the sales tax to 6.55 percent from 6.15 percent. Sales taxes are regressive since low-income consumers spend more of their income on consumption than wealthier households and because it is harder for them to avoid the levy by shopping out of state or online.

Because Kansas also allows local sales taxes, the combined tax rate in some cities could top 10 percent. In Kansas City, KS, the combined rate is already higher than on the Missouri side; adding another half percent could push shopping eastward.

The Senate bill would reduce the sales tax on food to 5.7 percent but also eliminates the food sales tax credit-- another regressive change. Kansas is one of only 13 states to tax food, and the credit goes to families with income less than about $30,000. Kansas tried to repeal the rebate in 2012 but, faced with a public outcry, the state restored the credit in 2013 but only for households with positive tax liability.

A proposed 50 cent cigarette tax increase is also regressive, through the Kansas tobacco levy would still be below the US median. The bigger problem: Funding general government with a declining source of tax revenue is never a good idea. And Kansans can easily buy cigarettes in low-tax Missouri. 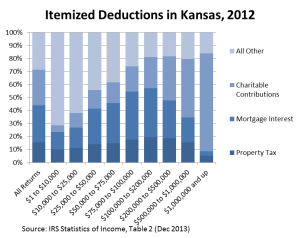 The Senate plan would take a few steps to undo some of the prior cuts’ fiscal damage. By stopping scheduled cuts in income tax rates, and leaving the top rate at 4.6 percent in 2018 rather than letting it fall to 3.9 percent, it partially addresses the long term imbalance. Finally, it would raise about $20 million by taxing certain payments to partners in pass-through firms that the IRS treat as ordinary income. This is just a small part of the $200 million price tag of exempting partnership income and sole proprietorships but it is a step in the right direction.

That Kansas is scrambling at this late date to close its budget hole is a scandal. After all, the revenue losses from recent tax cuts are no surprise. In 2012-2013, the Kansas Legislative Research Department projected  that they’d cut state revenue by about 10 percent.

The plan still doesn't solve the state’s long-term fiscal problem. In the best case, it might close the gap for the next year or two. But if the courts order the state to restore education spending, even the two-year fiscal hole won’t be filled.

Where else can the state go for revenue? They may have to raise taxes on middle- and upper-income Kansans.