The 2017 Tax Cuts and Jobs Act (TCJA) changed the way parts of the tax code are indexed for inflation. Instead of using the standard inflation measure, the CPI-U, it shifted to what’s known as chained CPI, or C-CPI-U. At the time, the Joint Committee on Taxation estimated this would raise federal revenue by $134 billion over ten years by reducing inflation adjustments for tax brackets and other elements of the revenue code.

But the pandemic has scrambled the effects of the change in some surprising ways.

As pointed out by my TPC colleague Howard Gleckman, because the chained CPI usually grows more slowly than the CPI-U, inflation adjustments generally are lower and taxes higher. But not always. Now is one of those times when the chained CPI is growing more quickly than the standard CPI. Yet, this may not be reflected in the inflation adjustments used in the tax code.

Economists have known for a long time that these calculations overstate the actual change in the cost of living, because people can reduce the effect of inflation on their standard of living by substituting goods that are becoming relatively cheaper for goods that are becoming relatively more expensive. For example, if the price of hamburger rises faster than the price of steak, people will be more likely to buy relatively more affordable steak. The standard CPI does not account for this change in behavior, but the chained CPI does. Thus, it tends to grow more slowly than the CPI-U in normal times.

But we are not living in normal times. COVID-19 caused wild changes in spending that have nothing to do with relative price fluctuations. For example, between January and June 2020 the weight for airfare fell by 86 percent, and the weight for food away from home fell by 43 percent. But people may not have been responding to price changes. Instead, demand for airfare and restaurants collapsed in the first six months of 2020 due to the pandemic.

When this happens, it’s possible that prices will respond to changes in demand more than demand responds to changes in price. For example, seasonally adjusted airfare prices fell by more than 25 percent from January 2020 to June 2020.

Decreasing weights when prices fall (and increasing them when prices rise) can cause the chained CPI to grow more quickly than the CPI-U. As shown in Figure 1, the annual growth rate of the CPI-U is usually higher than the chained CPI, but in 2020 that reversed and the chained CPI grew faster. The last time this happened? During the Great Recession of 2008. 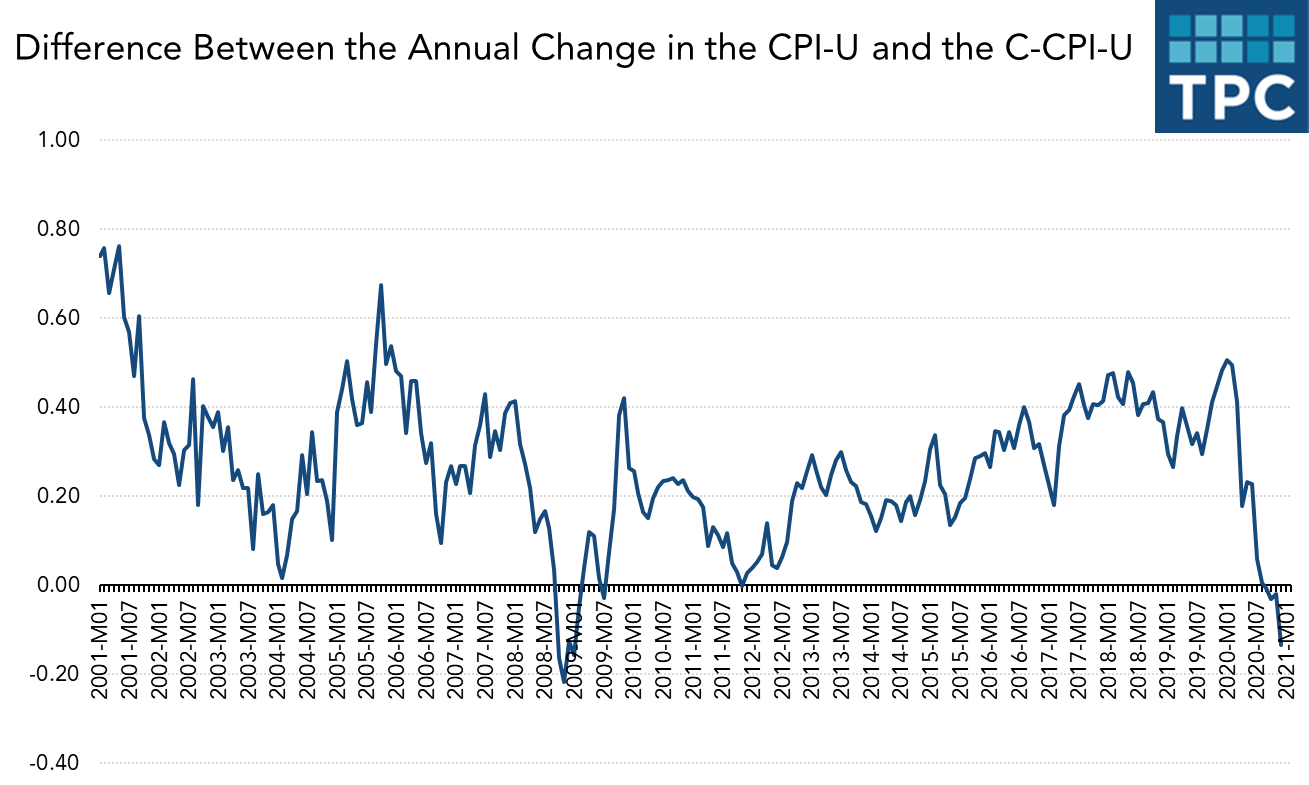 So do tax brackets increase more using the chained CPI when this happens? Not necessarily.

The TCJA’s inflation adjustment compares a one-year average of index values to a one-year average from a previous year. And because of lags in spending data, there are three versions of the chained CPI: initial, intermediate, and final. The initial and intermediate values use older data to project what the final index will look like once all of the spending data is available, and these projections probably aren’t very good in a COVID economy. The one-year average, which uses the latest data available at the time of the calculation, ends up being a mix of initial values for some months, intermediate values for others, and final values for still others.