How Much Will People Save From Maryland’s Gas Tax Holiday? Not Much

In response to rising gas prices, Maryland suspended its gas tax for 30 days. Connecticut and Georgia also have created gas tax holidays and lawmakers in other states are debating some form of gas tax relief.

Although well-meaning, it’s not clear that this policy will provide much benefit to drivers. To the extent that gas tax holidays do help, they offer perverse incentives that will not solve the gas shortage. They also reduce state revenue typically targeted for road maintenance or mass transit.

As I pointed out in an earlier blog, the federal gasoline tax hasn’t changed since it was raised to 18.4 cents in 1993, and in real terms it is now a fraction of its nominal value back then. Maryland raised its gas tax to 23.5 cents per gallon in 1992, and to 27 cents per gallon in 2013. Possibly even more important given current conditions, it also indexed the tax for inflation. In today’s dollars, the combined Maryland and federal taxes are just under 55 cents per gallon. 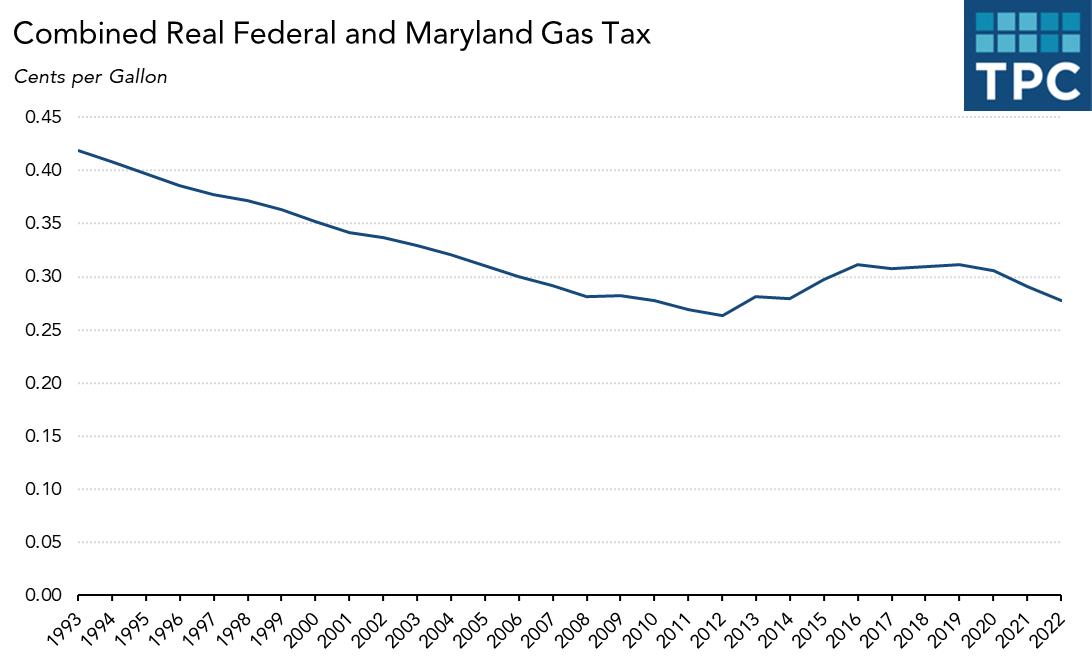 However, the real, inflation-adjusted value of the combined federal and state taxes in Maryland is the same as it was in 2010 and substantially below 1993. So, while no one likes to pay taxes, the total burden from the gasoline tax really hasn’t been getting worse.

This means that temporarily lifting the taxes won’t help drivers very much.  A Maryland driver using 20 gallons of gas per week would save about $30 over the state’s month-long holiday. And that assumes the entire tax cut is passed on to consumers, which is unlikely given the volatility in gas prices and the tightness of supplies.

To the extent that the tax cut does reduce prices, it can cause other problems. As noted in 2012 by my TPC colleague Kim Rueben and former TPC staff member Yuri Shadunsky, gas tax holidays can induce drivers from other states to expend gas to cross state lines for those lower prices. And my colleague Howard Gleckman points out that suspending the gas tax increases demand during a shortage, which is the opposite of what policies should be doing.

When gas prices rise quickly, governments can feel pressure to respond. Suspending gas taxes may sound like a good idea, but it isn’t likely to help much and could make things worse. There is, however, one bright spot in Maryland’s tax holiday: it’s temporary.