The latest version of the House Ways & Means Committee’s Tax Cuts & Jobs Act (TCJA), now due to be voted on by the full House on Thursday, looks very much like Chairman Kevin Brady’s first draft of the bill. While it would cut taxes for all income groups, the largest benefits would go to the highest-income households. By 2027, they’d receive nearly half the benefits of the bill,  according to a new Tax Policy Center analysis.

The new House version of the TCJA would cut taxes by an average of about $1,200 in 2018. About three-quarters of households would get a tax cut—averaging about $1,900--while about 7 percent would pay an average of $2,100 in higher taxes than under current law. 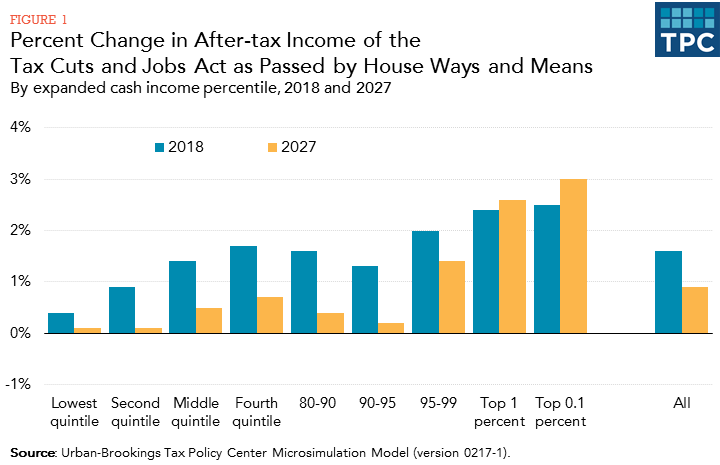 However, by 2027 tax benefits would shift even more to the highest-income households.  In 2018, the top 1 percent would get about one-fifth of the bill’s net tax cuts. By 2027, they’d get nearly half. Middle income households would see their average tax cut fall from 1.4 percent to 0.5 percent of after-tax income largely due to the expiration of the $300 family tax credit and tax provisions being indexed by the slower-growing chained CPI. By contrast, those in the top 1 percent would see larger tax cuts as percent of after-tax income.

The latest version of the bill is relatively more generous to the highest income taxpayers than Brady’s draft. TPC figures that middle income households would get an average tax cut of $360 in 2027 under the bill going to the House floor, compared to $320 under the first draft. But those in the top 1 percent would pay an average of $62,000 less than under current law, compared to about $53,000 in Brady’s initial proposal.  And the average tax cut for those at the very top would jump from $278,000, or 2.6 percent of their after-tax income, to $321,000, or 3 percent of their after-tax income. One reason: Last minute amendments further reduced self-employment taxes on high-income owners of pass-through businesses such as partnerships.

While President Trump’s has promised to cut taxes primarily for those with middle incomes, the House version focuses a large share of its benefits on the highest-income taxpayers.