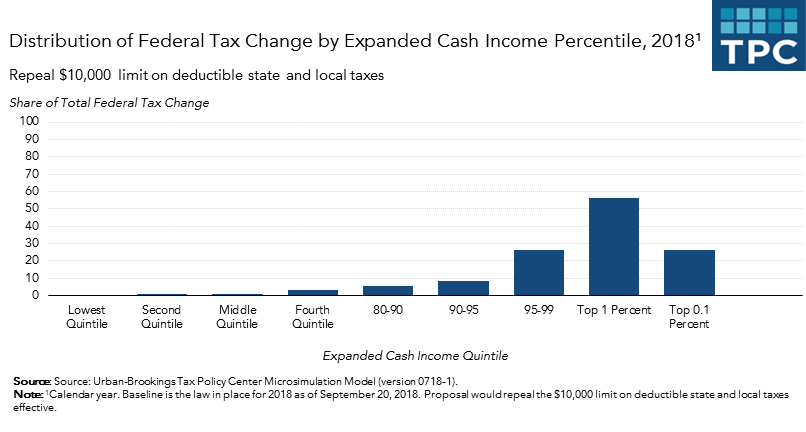 By allowing taxpayers to take the full SALT deduction, Congress would also increase the number of itemizers, which was cut sharply by the TCJA. This year, about 17.9 million households are expected to itemize. If the SALT cap is repealed, 21.9 million would do so. That would rise to 29.2 million by 2025.

As you look at these estimates, keep in mind that if Congress does nothing nearly all the individual tax provisions of the TCJA, including the SALT cap, expire after 2025.

But repealing the cap now would create an added benefit for many high-income households. The TPC analysis compared repeal of the SALT cap to current law. However, upper-income households would do especially well if the SALT cap is killed because the TCJA also significantly weakened the individual Alternative Minimum Tax and repealed the limitation on itemized deductions (called Pease, after the congressman who proposed it).

The AMT and Pease both limited the federal tax subsidy for state and local tax payments by high-income households. If the SALT cap is ditched and the old Pease and AMT provisions are not restored, many of those households would pay much less in taxes, relative to what they would have paid under the pre-TCJA law.

Blue state Democrats insist that the SALT cap is unfair to their residents. And on one level they are right: Largely because of that provision, upper-income households in high-tax states tend to benefit less from the TCJA than those who make the same income but live in low-tax states. And some even pay higher taxes than under the old law. For more details, see TPC’s analysis here.

As a result, several states sued  the federal government to try to reverse the cap. They’ve also tried to adopt work-arounds to assist households with high state and local tax bills. Last month, Treasury rejected the most common solution—an effort to turn state and local tax payments, which are now only partially deductible, into charitable gifts to state-sanctioned charities, which remain fully deductible.

The story is more complicated, however. TPC analyzed only the direct effects of repeal on the after-tax income of households. It did not look at what will happen to state budgets if high-income residents resist tax increases that are now less subsidized by the federal revenue code.