The Congress shall have power to lay and collect taxes on incomes, from whatever source derived, without apportionment among the several States, and without regard to any census or enumeration.  [U.S. Constitution, 16th Amendment]

On February 3, 1913, Delaware became the 36th state to ratify the 16th amendment to the Constitution, which authorized the US Income Tax.  With 75 percent of the states in agreement (at the time, there were 48 states in the U.S.), the amendment became the law of the land.

Many legal scholars think that the Supreme Court erred when it struck down an earlier income tax and that it would have reversed itself if Congress had tried again.  So it's possible that the 16th amendment was unnecessary, but it did settle once and for all that the income tax is constitutional (except for a small group of tax protesters, who willfully ignore an overwhelming body of case law).

Immediately after ratification of the amendment, Congress created the first income tax.  The declaration form was four pages long, including instructions, and the top rate was 7 percent.  The tax applied only to  rich people: The personal exemption for single filers in 1913 was $3,000, equivalent to almost $70,000 in 2012; the exemption for couples was $4,000, or $93,000 in 2012$.

Incomes were also much lower back then.  In consequence, only 358,000 returns were filed in 1913.  (The IRS has a wealth of historical statistics about the income tax here.)

Nobody held tailgate parties to celebrate the income tax centenary nor did anyone lip sync the National Anthem on its behalf.  People do not love the income tax--at best they tolerate it.  It is complex, inefficient, unfair, and it is the biggest tax in a federal revenue system that has not come close to paying for federal spending for more than a decade.

But it's not as unpopular as Congress.  AEI economist Karlyn Bowman has produced a fascinating compendium of surveys of public attitudes toward taxation dating back to 1937.  The last time Americans were asked about the fairness of various federal taxes, 53 percent rated the income tax as fair to very fair.  Only payroll taxes and sin taxes (excise taxes on beer, wine, and cigarettes) rated higher. 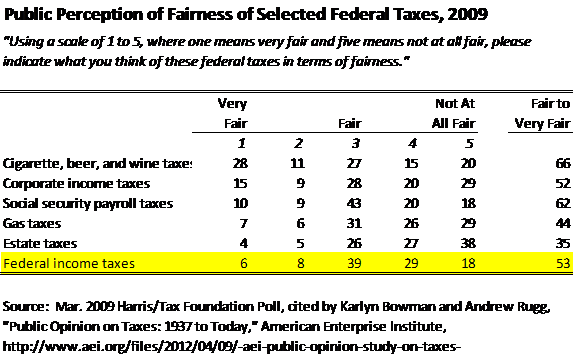 What's more, most people's complaint is not that they pay too much federal income tax, but that the rich do not pay their fair share.  And most people think that the federal government wastes a lot of the money it collects.  In a 2005 survey, people were asked, "What bothers you more – how much you pay in taxes or how your taxes are spent?"  71 percent said that they were more concerned about spending than their tax burdens. Nonetheless, in September 2011, only 26 percent of respondents said they would favor lower taxes if it meant fewer public services.

The fact is that people mostly like the things that the income tax helps pay for--roads, courts, national defense, national parks, clear air and water and safe food, and a significant share of health programs for the elderly--even if they wish all those programs could be provided more efficiently.

A case in point: the major expansion of the income tax occurred because we needed to finance World War II.  Americans supported that unprecedented rise in tax burdens--when the income tax went from a "class tax" to a "mass tax"--because they overwhelmingly supported the war against fascism.  Although there's no way of knowing this with certainty, World War II might  have come out much differently if the United States were still reliant on excise taxes and tariffs as its primary source of revenue.

Americans mostly seem to favor a progressive tax system--and the income tax is highly progressive.  And they mostly do not want to leave a huge pile of debt for their children and grandchildren.

Winston Churchill once said that "Democracy is the worst form of government, except for all those other forms that have been tried from time to time."

Len Burman is coauthor with Joel Slemrod of Taxes in America:  What Everyone Needs to Know.