The Federal Government on Autopilot: Mandatory Spending and the Entitlement Crisis

Yesterday, I testified before a House Judiciary Committee Task Force on the risks of having so much of government  on auto-pilot. Through permanent, automatic, and growing mandatory programs and tax subsidies, past lawmakers have pre-committed the majority of new revenues that the government is scheduled to collect. As a result, today’s lawmakers have little ability to revise  priorities to keep up with a rapidly changing world. Here is a lightly edited version of my oral testimony. My full written testimony is here.

Let me begin by noting that we live at a time of extraordinary possibility, but you wouldn’t believe it by looking at the headlines. We have never before been so rich, even if many needs remain unaddressed, and many do not share in that growth.

Yet, partly because we are ruled over by dead men (and, yes, they were largely men), we stand with our backs to an ocean of possibilities that lay at our feet.  I try to show this by two means.  First, a decline in what I call fiscal democracy—the discretion left to current voters and policymakers to determine how government should evolve. This index measures how much of our current revenues are pre-committed to programs that require no vote by Congress or, in technical terms, to mandatory spending programs. This index is politically neutral: fiscal democracy is reduced through both increases in mandatory spending and reductions in taxes.

By this measure, in 2009 for the first time in US history, every dollar of revenue was pre-committed before the new Congress walked through the doors of the Capitol.

Percentage of federal receipts remaining after mandatory and interest spending 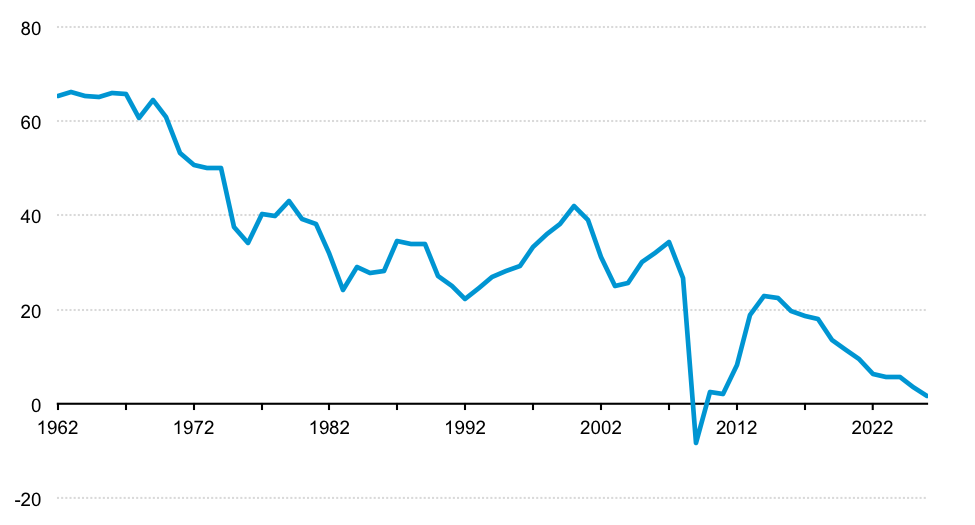 The second piece of evidence comes from simply comparing two budgets: first, a traditional budget such as prevailed over most of this nation’s history, where spending is largely discretionary, and, second, a modern budget, where growth in spending and tax subsidies are committed to rise automatically faster than revenues.  Congress and the president end up in a never-ending game of Whack-A-Mole or, should I say, Whack-Some-Dough. No wonder there are still budget problems after deficit-reducing actions in 1982, 1983, 1984, 1987, 1990, 1993, 1997, 2005, 2011, 2013, and 2015, among others.

[The Need for Discretion]

Consider the consequences. It’s not just the economic problems of rising debt and inability to respond adequately to the next recession or emergency. It’s also the political requirement imposed on you as legislators to renege on promises to the public and then facing its wrath in elections.

Yet, through inability to work together, both parties lose their agendas, getting government that is both fat and ineffective at meeting public needs.

For example, out of a scheduled increase of close to $12,000 annually per household scheduled in additional spending and tax subsidies by 2026, almost nothing goes for programs for all that encourage the development of earnings, wealth, human and social capital. And kids also get essentially nothing—NOTHING!

Restoring fiscal democracy requires nothing more or less than restoring greater discretion to the budget. Democrats must be willing to limit the share of spending on automatic pilot, and Republicans must do likewise for tax subsidies, while agreeing to collect enough revenues to pay our bills.  And both the president and the Congress need to be held responsible for ALL changes in the budget, whether newly enacted or passively allowed to continue.

Restoring discretion does not simply mean paring program growth or raising taxes, but opening the door to modernizing programs to better meet public needs, including providing greater opportunity for all.

I am not naïve about the difficulty of reversing a multi-decade decline in fiscal democracy. Yet until we restore greater discretion to the budget, the frustration and anger faced by political parties and the public here and around the developed world will continue, deriving in no small part from a budget process that has shifted national debates from what we can do to what we can’t—that is, from letting dead men rule.

Youngsters cool off in a playground water spray on Thursday, July 21, 2011, in the East Flatbush section of Brooklyn, New York. A heat wave that has enveloped much of the central part of the country for the past couple of weeks is moving east and temperatures are expected to top the 100-degree. (AP Photo/Bebeto Matthews)