The Economics of Social Distancing, Or Why The Coronavirus Made Me Postpone My Pi Day Party

Pi Day is one of my favorite holidays, where I have a chance to celebrate math, pies, and puns. All of which I love. This year it falls on a Saturday (3/14), making it a perfect opportunity to party with friends. But, should I host the party in the midst of the coronavirus pandemic?

For advice on what to do, I read an article in the Atlantic about social distancing. The advice from experts seemed contradictory. One said “small gatherings are probably okay as long as nobody has symptoms.”  Another called it a “gray zone,” because it would be hard to prevent transmission if someone was sick. A third expert just recommended “limiting all social engagements.”

I went to bed confused, but woke up (unfortunately, at 3:45am) realizing that the three experts were talking about two different, although related, problems. Small parties with appropriate precautions are low risk to the participants, though not zero risk. This situation raises the second problem: If a lot of people each decide to hold small get-togethers, some will have unlucky outcomes, and the coronavirus will be transmitted to some attendees. That’s not only bad for those attendees, but dangerous for society as a whole, because transmission of the virus would go up—potentially by a lot.

This issue is a classic economic problem. If my guests and I consider only the private cost of my event, we might decide that the risk is acceptably low. If we consider the social cost, including the risk to others, the risk probably becomes unacceptably high. It is like pollution: If we do not consider how our individual activities harm the broader community, we will make everyone worse off.

Appropriately for a Pi party, I turned to math for help. Warning: If you are not a math geek, skip the next two paragraphs.

Suppose the average partygoer’s probability of undetected infection is p. Their probability of not being infected is 1-p. If n people drawn at random from the population attend the party (in particular, they didn’t all just step off the same cruise ship), then the probability nobody at the party is infected is (1-p)n.

We don’t know p now because there has been so little testing. But, it might be reasonable to assume that the odds any individual partygoer is unknowingly infected is about 1 in 10,000. That corresponds to p = 0.0001. If 30 people come to my party, the probability that any one is infected is thus (1 – 0.999930) or 0.003, which is really low. If everybody washes hands and sneezes into a disposable tissue, the risk that anyone picks up the virus at my party is miniscule.

I put my comforting calculations in this spreadsheet (of course I did). 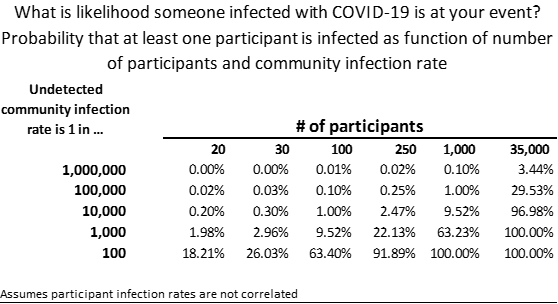 These calculations suggest my party could be pretty safe. In contrast, going to Opening Day for the World Series Champion Washington Nationals—a planned excursion that my kids and I were really looking forward to—would have been a terrible idea (n = 35,000). Major league baseball postponed the start of the season, though probably not because of my table.

If everyone considers only their own risk of infection, lots of seemingly safe gatherings will happen. Sometimes, an infected person will show up and spread the virus, because low-probability outcomes are rare, but they do occur. (The probability last May that the Nats would win the World Series last year was way less than 0.3 percent.)

Another problem with people only considering their own risk, is that the occasional bad luck compounds. If thousands of people decide that small gatherings are safe, more people will be infected, which means that p will grow, and it will grow at an exponential rate if people do not adjust their behavior. Not only will more partygoers become ill, but more infected people wandering around the community means lots more people who come in contact with them will also get sick.

This is not only bad for the people who become infected, but it risks overwhelming the healthcare system, which can lead to even more unnecessary death and debilitating illness.

Some of my friends said they wouldn’t come to my party, because they are practicing “social distancing”—staying far enough from others to reduce the risk of virus transmission. Maybe they just have a lower risk tolerance than I do. But, mostly they are right, because social distancing protects the community. That is why I postponed my Pi Party.