Does the Tax Cuts and Jobs Act Pass the Tests of Good Tax Policy?

On April 11, I testified before the congressional Joint Economic Committee on whether the Tax Cuts and Jobs Act (TCJA) will help "Unleash America’s Economic Potential.” I find that Congress is conducting an interesting experiment by enacting a major economic stimulus at a time of full-employment.

In the real world, all these goals involve tradeoffs. But keeping these aims in mind makes it possible to evaluate changes in tax levels on some objective basis.

How does the TCJA measure up against these goals?

How will the law affect economic growth and jobs?  Conventional analysis suggests these effects are likely to be modest because:

The Tax Policy Center, the Penn Wharton Budget Model, and the Congressional Joint Committee on Taxation (and the Congressional Budget Office) all come to a similar conclusion: The economic effects of the TCJA are positive in the short run but will dissipate over subsequent years.

Impact on Fiscal Position of the US

Over the last 60 years or so, federal receipts have tended to fluctuate in a range of 15-20 percent of Gross Domestic Product (GDP). Tax legislation, economic booms, and economic downturns have all occurred over this timeframe, but receipts as a share of the economy have stayed in this relatively narrow range. During this period, the federal budget was balanced just twice. 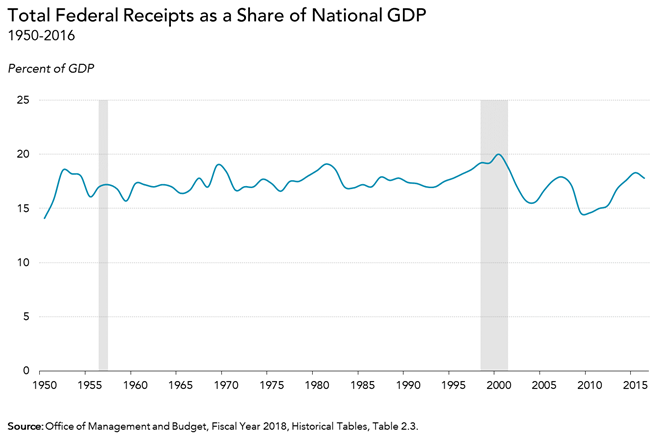 The most recent period was in the late 1990s/early 2000s, when federal receipts were right around 20 percent of GDP. Given demographic trends—retiring baby boomers, relatively low birth rates, and longer life spans—we should expect that revenue will have to at least reach those levels in the future to bring the federal budget into balance. But the TCJA goes in the opposite direction and reduces revenue as a share of the economy.

Thus, the TCJA is part of a large fiscal experiment. It provides a big fiscal stimulus when the economy is near full employment and it creates a number of investment incentives at a time when companies have been accumulating cash, indicating they have seen limited opportunities for profitable investments. But, proponents of the Act say that the law will lead to increased US investment that will in turn increase the productivity of US workers and increase wages.

It is too early to tell if all these linked relationships will occur. The outcomes are still months and years away, given investment planning horizons.

So the jury is out on the effects of the Tax Cuts and Jobs Act, but given the structure of the Act, with numerous parts scheduled to increase, phase-in, or phase-out, Congress will have many opportunities to evaluate the Act and make any necessary changes.