Does Learning About Taxes Change People’s Views About Fairness?

What makes people think the tax system is fair? In a fascinating new study, my Tax Policy Center colleague Vanessa Williamson found that people’s attitudes about tax fairness changes when they get new information about how much other people pay. This is especially true when they learn about the taxes low-income people pay.

Then, after taking the quiz, the participants in these four groups were asked their opinions about the tax system. Did they think high-income people paid too much, too little, or their fair share? What about low-income people?  What is the highest rate anyone should pay? Should the government redistribute income by raising taxes on the rich? And, finally, did they think their own taxes were fair?

First, Vanessa found that facts matter. When people learned about certain aspects of the tax code, their views on fairness changed, sometimes dramatically. This was especially true when they were asked to think about taxes paid by the poor. 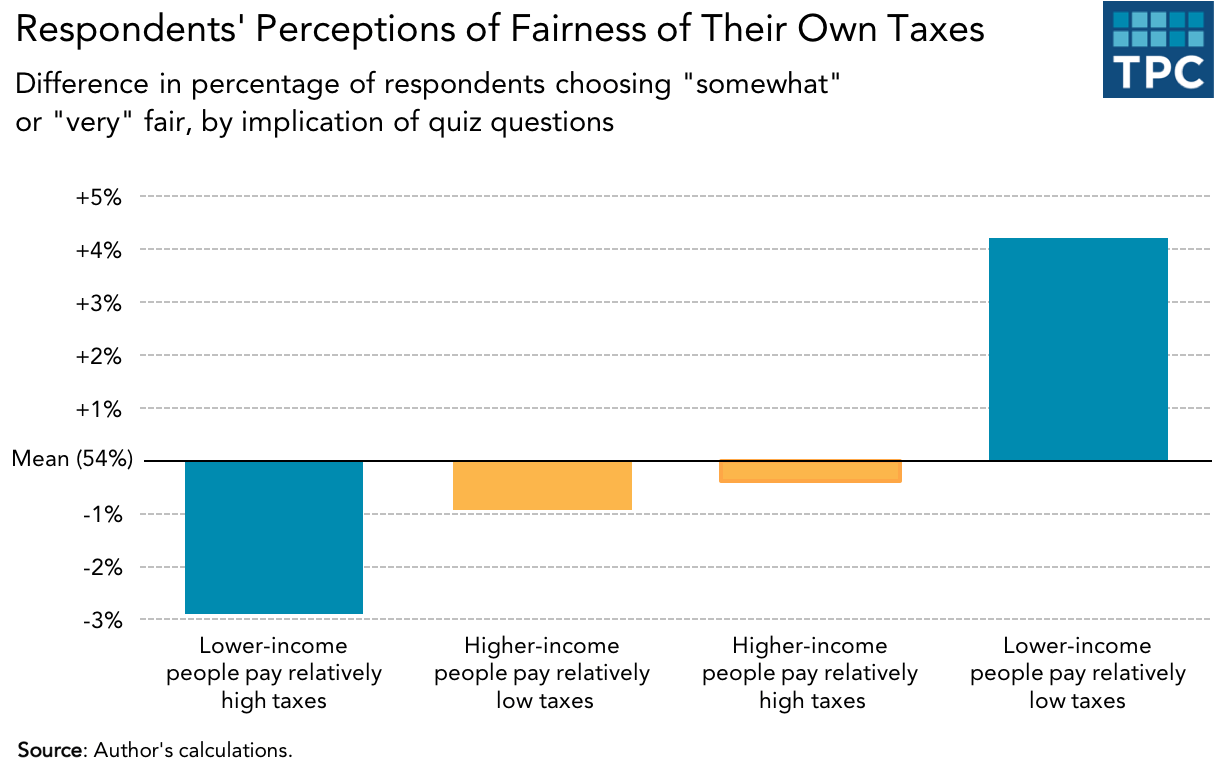 When it came to their views about the rich, Vanessa found much more modest effects. Those who answered questions suggesting that the rich take advantage of special tax breaks and overseas shelters were a bit more likely to say that the rich don’t pay their fair share, but their views moved by only 4 percentage points, much less than among those who were asked similar questions about low-income people.  People barely changed their views at all when asked questions that suggested the rich pay high taxes.

Vanessa also found an interesting see-saw effect. If people thought that taxpayers at one end of the income spectrum paid too much, they also believed that those at the other end paid too little. For example, if they learned that the poor were paying relatively high taxes, they were more likely to think the rich were not paying enough.

How did taking the quiz affect the respondents’ views about their own taxes? It turns out that the control group (those who were asked their views before learning new information about the tax code) were most likely to think their own taxes were fair. But once people were asked about taxes paid by the rich and the poor, they were more likely to think their own were less fair. And for the most part it didn’t matter much which quiz they took or what their responses were.

A few caveats. This was not a representative sample. Overall, Vox readers are more politically engaged, more liberal, younger, and wealthier than the public as a whole. And interestingly, while Vox readers overall are divided evenly among men and women, two-thirds of those who chose to participate in the quiz were men.  As a result, Vanessa couldn’t say that all Americans would respond this way, but she could measure how getting information affects some people’s opinions about taxes.

Still, the results are intriguing. They raise a number of important questions for further academic study. And they may suggest to politicians that people’s views about the tax code can be manipulated by presenting them with “facts,” whether real or alternative.