Despite Trump’s Claims, It Is Hard To See Much Economic Impact Two Years After Passage Of The Tax Cuts And Jobs Act

In last night’s State of the Union address, President Trump declared, “Our economy is the best it has ever been.”  And, he added, “If we hadn’t reversed the failed economic policies of the previous administration, the world would not now be witnessing this great economic success.”

Yet, two years after passage of a signature element of Trump’s economic agenda, the Tax Cuts and Jobs Act, the US economy looks in many ways like it did before the landmark tax cut. Overall, the US economy had a burst of growth in 2018, right after Congress passed the TCJA. But in 2019, growth was essentially the same as in 2017. The stock and bond markets are up, business investment is down, and wages are up—a little. Job growth remains solid but weaker than in the period immediately after passage of the TCJA.

Overall, it is hard to identify any inflection points around the TCJA, which Congress passed in December, 2017. Despite the Trump Administration’s rosy promises that the post-TCJA economy would boom, it has instead grown on many dimensions at roughly the same steady, unspectacular pace as it did prior to passage of the tax law. 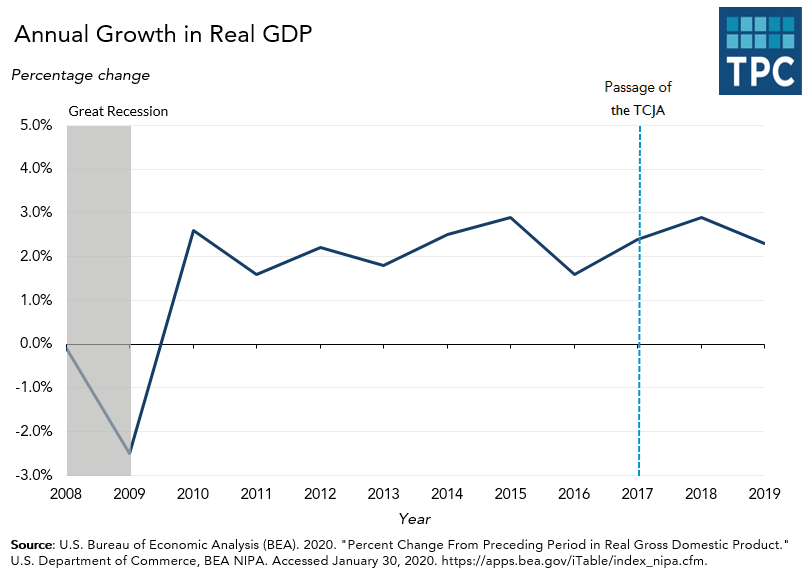 Growth was driven mostly by consumer and government spending. Consumer spending grew by 2.6 percent in 2019, a more modest pace than 2018’s growth rate of 3%. Still, it accounted for more than two-thirds of 2019’s overall growth. Real disposable income was up 3 percent, slower than the 4 percent increase in 2018.

A major drag on the economy was business investment, the area that the Trump Administration claimed would benefit most from the TCJA’s business tax cuts. Business fixed investment was slightly negative for the year, a sharp contrast to the nearly 5 percent real growth rate in 2017. While spending for structures and equipment sagged, purchases of business intellectual property grew strongly. 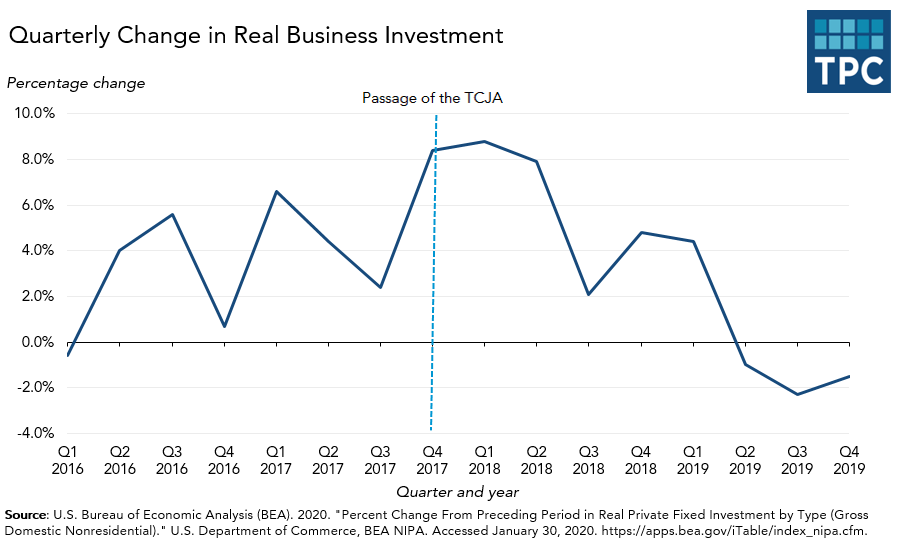 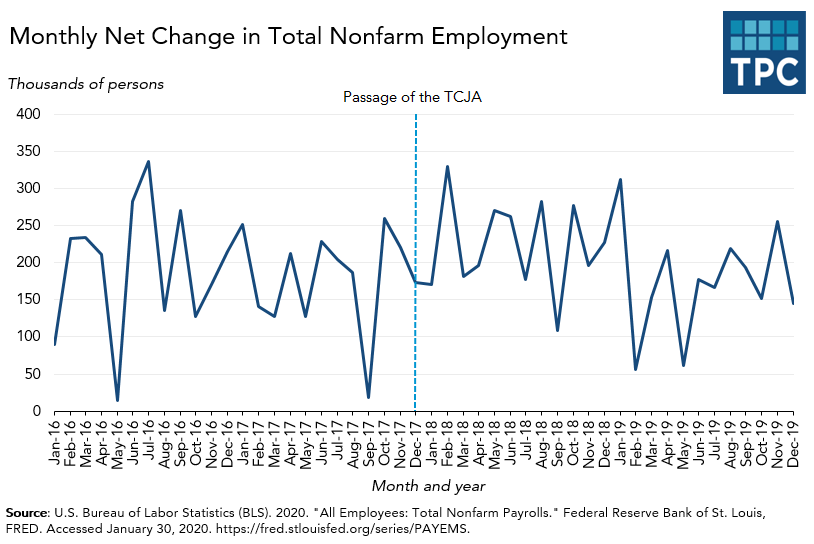 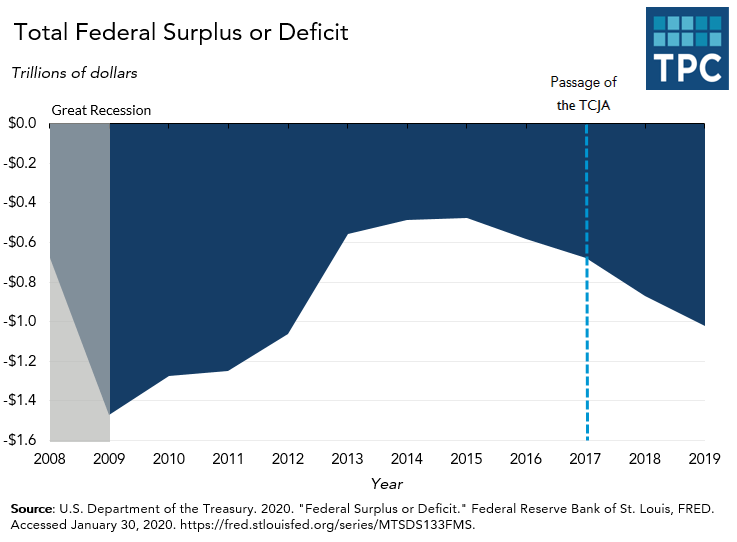 While the economy grew modestly, US equities enjoyed another strong year in 2019. The S&P 500 index rose by 23 percent from late 2017 to this week. Stocks likely were helped by an increase in corporate profits driven in part by the corporate tax cuts in the TCJA. But the index has been rising more or less steadily since it bottomed in the depths of the Great Recession in early 2009.

At the same time, yields on 10-year Treasury bonds also continued their long-term decline, falling from 2.48 percent before passage of the TCJA to about 1.5 percent this week. 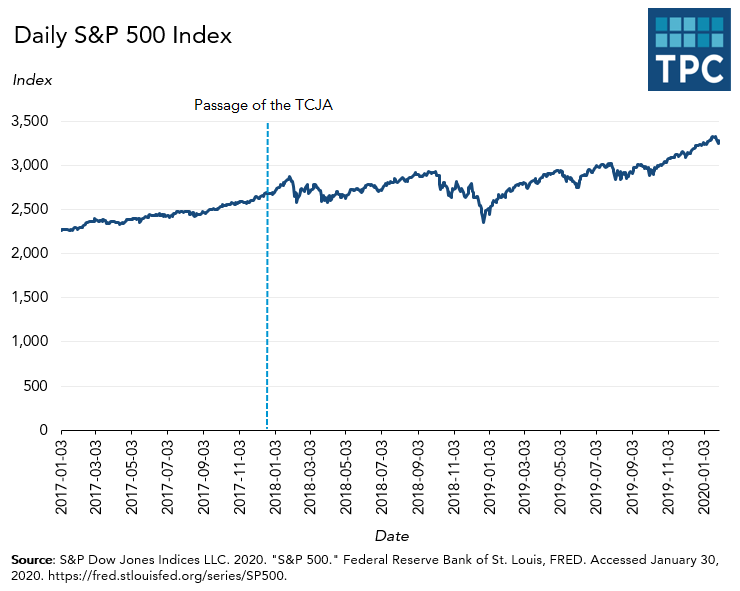 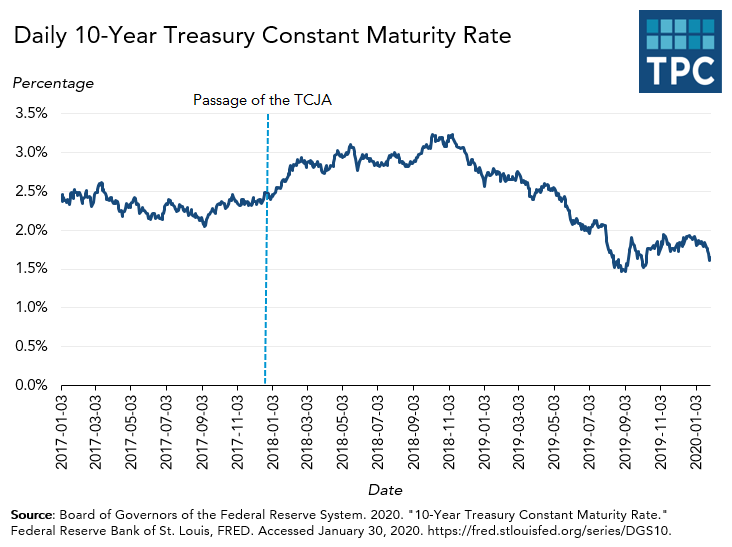 Add it up, and after two years, the TCJA seems to have had remarkably little impact on the overall economy. It put more money in consumer’s pockets and, along with the likely wealth effect of the rising stock market, generated some additional consumer and business spending early on. Consumer spending continues unabated. But after a few quarters of strong growth, business investment seems to have slumped—perhaps due in part to the president’s tariffs which are themselves tax increases on US businesses and consumers.

The lesson may be that while the TCJA is expected to cut taxes by about $180 billion-a-year, even tax cuts of that size have only a limited ability to move a $20 trillion economy.