Cryptocurrency Is Primarily An Investment, Not Money. It Should Be Taxed That Way

Senators Pat Toomey (R-PA) and Kyrsten Sinema (D-AZ) have proposed exempting cryptocurrency transactions of $50 or less from capital gains taxes. While it seems like a modest tax change, it could have profound effects on how crypto is perceived and used. And it would give crypto a tax advantage over other investments.

Like many crypto supporters, Toomey and Sinema appear to want tokens treated as both money and property. To some degree, the history of crypto supports that idea. The first cryptocurrency, Bitcoin, was created to allow peer-to-peer financial transactions without the use of a commercial bank or other intermediary.

And some forms of crypto do seem to function as currency, at least within their limited ecosystems. But much of crypto’s popularity has been fueled by investor speculation and occasional large increases in valuations, not its potential as a cash substitute.

Since 2014, the IRS has treated crypto as property subject to capital gains taxes when it is sold. And it is considered a sale when crypto tokens are used to pay for a purchase.

Toomey and Sinema are just the most recent example of lawmakers who want to grant crypto special—but different-- tax status depending on how it is used. Senators Kirsten Gillibrand (D-NY) and Cynthia Lummis (R-WY) proposed legislation in June to allow certain crypto professionals--miners and stakers—to defer tax on compensation paid with crypto tokens until they sell those tokens.

In other words, rather than taxing that compensation as cash wages, the IRS would be required to treat it more like an asset—exactly the opposite of the Toomey-Sinema bill. My TPC colleague John Buhl explains that bill here.

For a typical consumer, the tax benefits of the Toomey-Sinema bill would be modest. It may be hard to imagine given the recent plunge in crypto values, but assume $25 you invested in crypto doubled to $50, which you then used to buy dinner. Under current law, your $25 profit would be taxed at 20 percent. Under the new legislation, it would be tax free. You’d save $5.00 in tax.

More than a consumer tax break

The immediate tax break would be meaningful only to those power users who do most of their shopping with crypto. And to the industry itself.

Make no mistake, that $50 limit on tax-free transactions is only the beginning. You can be sure that backers soon will try to raise the limit to $100, and then $200. I can hear them now: “Fifty dollars? Hard-working Americans can’t even buy groceries for $50.” The Lummis-Gillibrand bill already has a $200 cap.

Some crypto does function as currency. When they work as advertised, these stablecoins are pegged the dollar, with little price fluctuation. By design, these would generate little or no capital gain and some de minimus might make sense, if only to avoid record-keeping aggrevation.

And that is the real issue: The industry wants it both ways. Toomey and Sinema want the IRS to treat    crypto as money—at least sometimes. Their argument: You don’t pay tax when you withdraw cash from an ATM to buy that dinner. Why should you pay tax when you use crypto?

Well, because most crypto isn’t money. It is an investment, and a  highly speculative one at that. Here is a two-year historical price chart for Bitcoin, one of the most stable crypto currencies.

minimus exemption might make sense, if only to avoid record-keeping aggravation.

Toomey and Sinema would give crypto a significant tax advantage over any other investments. After all, if you sell stock to help pay living expenses, you owe capital  gains taxes. Why should it be different with crypto? 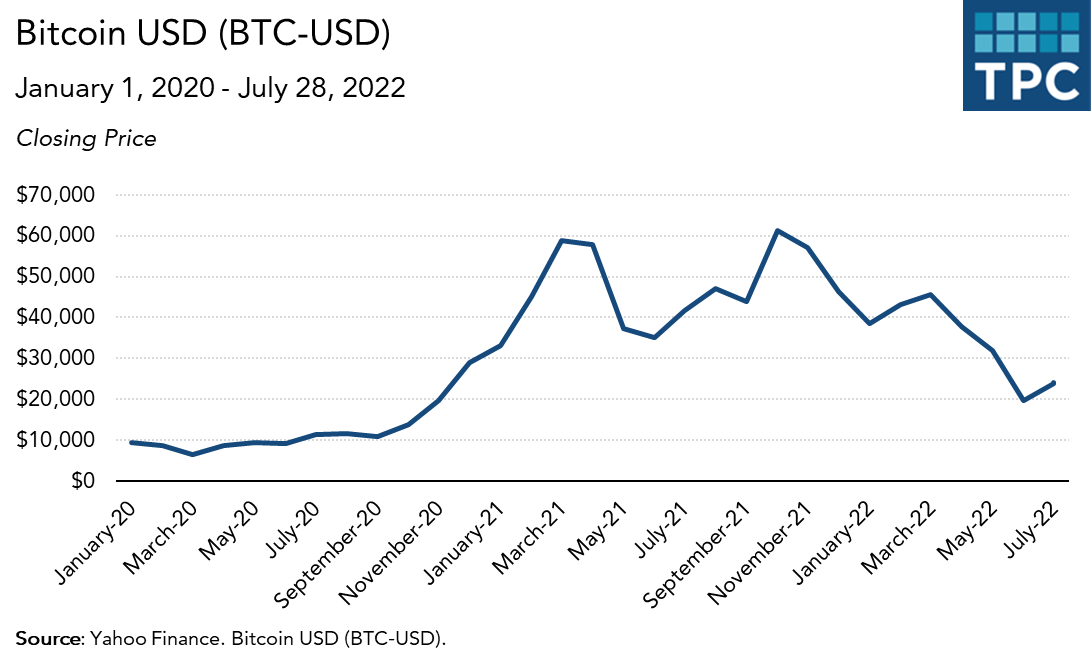 This is not how healthy currencies act. Money is supposed to be a stable means of exchange, not a speculative investment.

Yet promoters want to have their virtual cake and eat it too. They peddle crypto both as an investment and as money. Here is a typical online ad—in this case from the crypto exchange Kraken.

This really isn’t hard. No doubt, crypto creates enormous regulatory challenges. And one day it may function as alternative currency. But for now it largely is an investment, not money. That is how it primarily is being marketed. And the tax laws should continue to treat it that way.