Presidential Budgets reveal much about the priorities of an administration. President Trump’s fiscal year 2021 budget, released in early 2020, proposes almost no additional resources for workers, children, young and middle-age families, and most of the traditional functions of government.

In a recent study based on a new budget accounting framework, Erald Kolasi and I focused on priorities of that FY 2021 budget, as revealed by the total change in real (adjusted for inflation) spending, taxes, and deficits that it proposed. A related study, prepared by Julia Isaacs and other colleagues at the Urban Institute, focused on how the Trump budget proposal treated children versus other aspects of the economy over the upcoming ten-year period.

The FY 2021 budget projects the effects of the policies proposed for the coming decade, through 2030. When comparing the fiscal situation for 2030 to that for 2019, we find that almost all growth in real spending proposed in the President’s budget, other than interest on the debt, would go for Social Security and Medicare. Spending for everything else in aggregate would decline significantly in real dollars, as a share of total spending, and as a share of GDP.

Moreover, the growth in Social Security and Medicare alone would absorb almost all the nearly $1 trillion growth in total revenues over the decade. Higher interest on the debt, the one other area of major spending growth, would be covered partly by revenues and mainly by more federal borrowing. 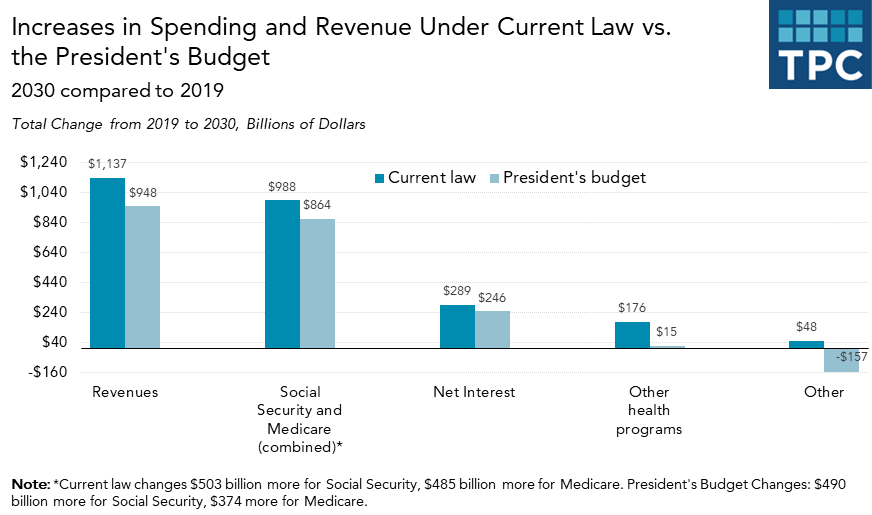 Most of the spending growth reflected in the President’s budget already is baked into current law and will occur even if Congress enacts none of his proposals. The left-hand or dark blue bar in each pair of bars in the figure shows the projected 10-year increase in federal spending under current law. The difference between current law and the president’s budget (each right-hand or light blue bar) represents the additional legislative changes proposed in the budget. Primary among those legislative proposals are cuts of about $200 billion in both revenues and all government programs other than health and Social Security, that is, most non-defense and defense programs. His main legislative priority in healthcare is to reduce significantly the additional spending for Medicaid and for the exchange subsidies under the Affordable Care Act (ACA)—the dominant items in the “other health programs” category in the graph.

To be fair, we should note that President Obama’s proposed budget for fiscal 2017 called for 91 percent of all growth in spending to go for Social Security, healthcare and interest on the debt from 2016 to 2026. Moreover, some proposed Medicare payment reforms in the Trump budget are similar to items in the Obama budget. President Obama’s long-term budget proposals mainly differed from President Trump’s by increasing rather than decreasing taxes, by increasing rather than cutting support for Medicaid and ACA exchange subsidies, and by holding fixed in real terms rather than significantly cutting other spending, particularly non-defense discretionary spending.

The COVID-19 pandemic shows the need for different spending priorities

The priorities in the President’s budget can be compared to dramatically different priorities revealed in the Congressional response to the current health and economic crises.

I suggest that these new priorities result not merely from the short-term needs that have arisen from the COVID-19 pandemic but from those pressures on working families that have grown over time. While abandoned in the proposed Trump budget, non-health spending on these households was also given low priority in budgets even before he came into office. Had the federal government given more attention to those needs, we might have been better prepared to meet them when an economic downturn occurred.

Will the COVID-19 crisis awaken our elected officials to a rational long-term budget policy that includes needed investments in future generations? Will the crisis teach us to target resources better as society’s needs and opportunities evolve?  We shall see.