When Congress enacted the American Rescue Plan (ARP), it included an implicit deal: It agreed to reduce the level of additional future weekly federal unemployment compensation to $300   but also to exclude from federal income tax the first $10,200 of jobless benefits unemployed people received in 2020.

But a new Tax Policy Center analysis finds that shrinking an increase in assistance in exchange for a tax exclusion mostly benefits higher-income households, and is a bad deal for those jobless workers who need aid the most—those with the lowest household incomes.

TPC compared two alternatives: Making $5,000 of benefits tax-free or increasing taxable unemployment compensation by about $700 for each unemployed individual. Each of these options cost the Treasury an equal amount. Like the American Rescue Plan, we also limited nontaxability to those with AGI below $150,000. We analyzed these options as if they applied to taxpayers in 2019 to assess the trade-off in a non-pandemic year. 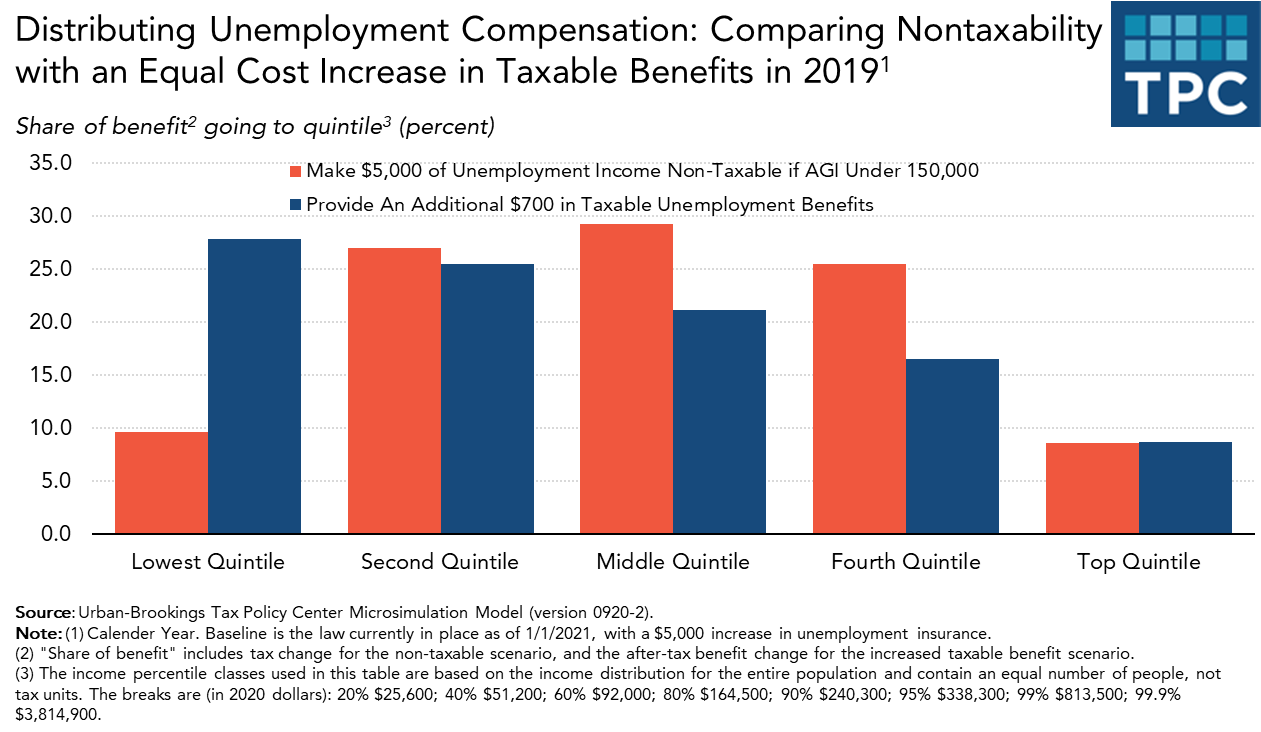 Nontaxability does little for most low-income households since they already pay little or no federal income tax. The poorest 20 percent (those making about $25,000 or less) would receive only 10 percent of the benefits from nontaxability but 28 percent of an across-the-board taxable benefit increase. The higher benefit also helps twice as many unemployed individuals in that low-income group and boosts their average net benefit.

Phasing out the tax exclusion for those making more than $150,000 also restricted benefits for the highest income households. As a result, they’d be roughly as well off on average as if they received an extra $700 in taxable benefits. Middle- and upper middle-income households (those making between about $50,000 and $165,000) do best from the tax exclusion. They receive 55 percent of the benefits from nontaxability but only 38 percent from a higher taxable benefit.

It’s not hard to understand why. The biggest winners from the tax exclusion are those with the most income from other sources, whether from a spouse, a higher level of wages when employed, or investment assets.

The ARP made a share of 2020 unemployment benefits nontaxable partly because many jobless people did not have taxes withheld from that assistance and could not pay those additional taxes during the current filing season. But as policymakers consider these issues in the future, they should recognize that trading off higher benefits for a tax exclusion favors those least in need of assistance.