As President Biden and congressional Democrats make another push to reach a compromise on a social spending, climate change, and tax bill, a key issue is what they’ll do with the Child Tax Credit (CTC). The Tax Policy Center analyzed five options that show how lawmakers could partially restore the expanded 2021 version of the CTC.

In in his State of the Union address, President Biden reiterated his support for restoring the CTC that Congress expanded in the 2021 American Rescue Plan Act (ARP), but did not propose a specific plan. The expanded program that kept a whopping 3.7 million children out of poverty before it expired last December remains in limbo. One path forward: Congress could trim any proposed expansion in a way that still protects the lowest income families who have been hit hardest by inflation.

If Congress simply restored the ARP version (option 1 in the figure below), all but the highest income families would receive a higher credit than they do today. The lowest income households would get the biggest increase. 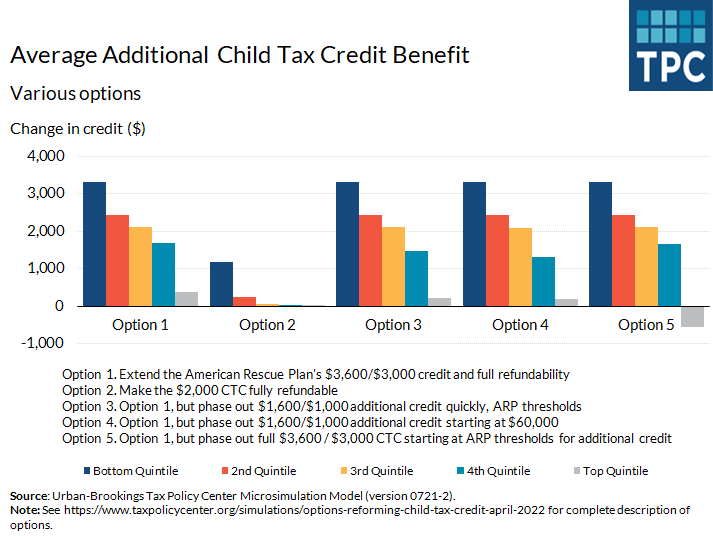 Alternatively, Congress could choose to keep just ARP’s full refundability (option 2). That would deliver an average new benefit of about $1,200 to families with children in the lowest one-fifth of the income distribution. That’s much less than the over $3,300 average new benefit if the higher credit amounts were also in place – but almost all the benefits would go to the lowest income families.

If Congress wanted a lower-cost expansion of the CTC, it could phase the credit out more quickly than the ARP did.

We studied several ways to do that. For example, increasing the credit to ARP amounts, restoring full refundability, and phasing the credit out more quickly (option 3), would be less generous for higher income families but still provide substantial additional assistance for most other households.

New research shows the expanded monthly credits families received last year did little to discourage work but did improve nutrition, decreased reliance on high-risk financial services such as credit cards, and helped low-income parents and children save for college.

ARP’s CTC expansion showed tax policy can be a powerful tool to stabilize low-income families with children. And continuing the most novel of those expansions, making the credit fully refundable, is critical to continuing to help these families.