Census of Governments Illustrates Declining Aid to Localities, Other Trends in State and Local Finance

COVID-19 is placing an unprecedented strain on local economies, hospital systems, health departments, and budgets. To weather the storm and continue to provide the critical services that residents expect and need, local governments will need significant federal financial assistance.

The Urban Institute’s interactive feature, State and Local Finance Data: Exploring the Census of Governments, shows that local governments are facing the coronavirus crisis after 40 years of significant decline in federal and state financial assistance. That may make their budgets and service delivery systems especially vulnerable to shocks such as COVID-19.

From 1977 to 2017, federal and state governments have substantially cut aid to counties, cities, and townships. On average, support has been cut from 31 to 16 percent of municipal revenue, from 27 percent to 15 percent of township revenue, and from 42 percent to 29 percent of county revenue. Federal and state aid to school districts has bucked this trend and increased slightly over the time period. Of course, there is substantial variation around these averages by state and other factors. 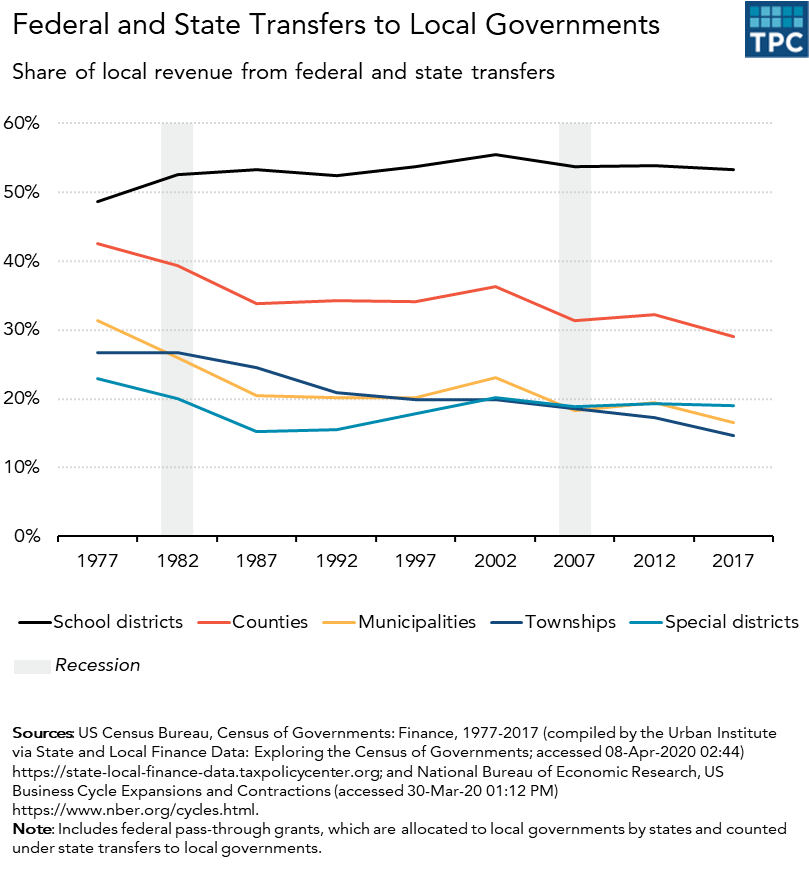 Much of the decline of federal and state support for localities resulted from reductions and even elimination of many federal place-based programs during the 1980s, as well as repeal of direct federal revenue sharing in 1987. Federal aid that flows directly to local governments without first passing through states declined from 12 percent to 4 percent of total municipal revenue since 1977, 7 percent to 1 percent of township revenue, and 9 percent to 3 percent of county revenue. These reductions generally bottomed out in the early 1990s, and direct federal aid to localities has remained relatively flat since then. 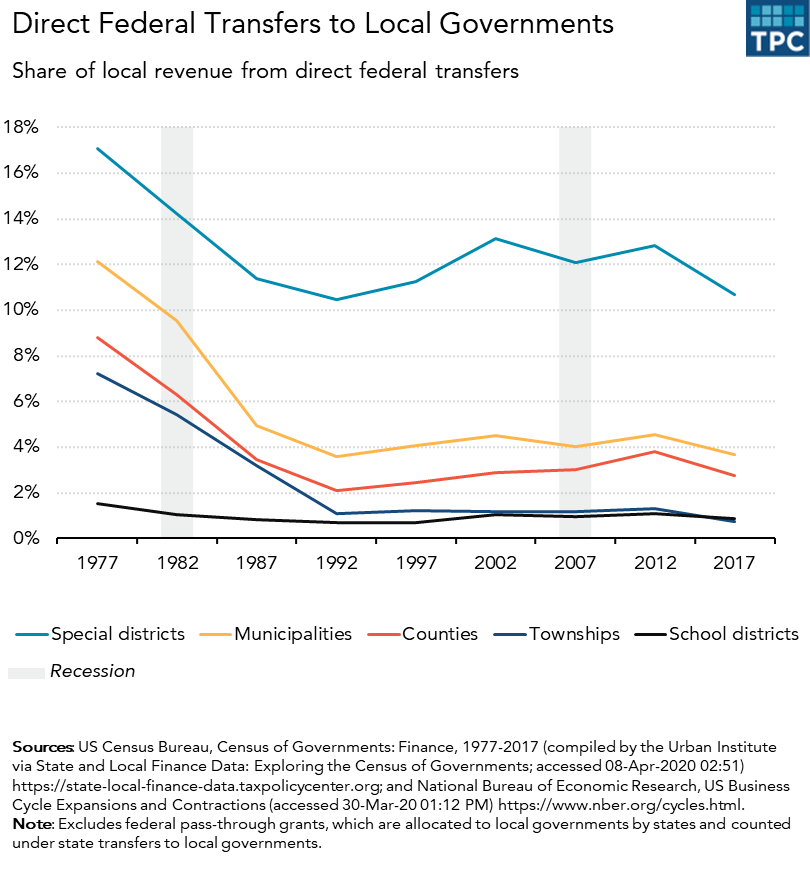 While its direct assistance declined, the federal government continued to fund localities indirectly through state-administered pass-through grants, such as the State-Administered Community Development Block Grant and Community Services Block Grant. These programs are financed by the federal government but administered by the states, and the resources are spent locally. Pass-through funding, however, is notoriously difficult to track and counted as a state transfer to local governments, along with any state-financed direct assistance. This indirect funding is therefore counted under total state and federal transfers to local governments.

For most US residents, local governments provide the most visible and direct evidence of their tax dollars at work. Every day, residents look to their school districts to educate children, cities and townships to keep roads paved, in addition to many other local services, and counties to maintain public health and safety. Local governments divvy up their service responsibilities in different ways. Sometimes a city, rather than an independent school district, funds and provides K-12 education, for example.

And data show that localities can’t – and don’t – do any of this alone.

State aid (including federal pass-through funding) remains an important source of revenue for local governments. And, since the Great Recession decimated state and local budgets 10 years ago, the country has hotly debated how best to deploy a complex web of federal and state grants, loans, and other transfers to aid local governments. In the wake of COVID-19, the federal government may need to  shore up, leverage, and expand this web of resources now.

To figure out next steps – for tomorrow, and for the long haul – policymakers, journalists, advocates, and the public are going to need data. Loads of it. Data from the US Census Bureau are a treasure, but they can be hard to navigate. Urban’s interactive feature can help illuminate trends in state and local revenue, spending, or debt to help contextualize the tough policy questions our federal, state, and local governments are facing.