In its semi-annual fiscal update released this week, the Congressional Budget Office projects that federal revenues will remain flat over the next decade, while spending—mostly for health care and Social Security—will rise. The result: Budget deficits, which have been declining in recent years as the economy has grown, will once again start to rise.

But take a closer look inside CBO’s overall revenue estimates. While it expects payroll taxes to fall steadily as a share of the economy and corporate income taxes to end the next 10 years roughly where they are today, CBO figures individual income taxes will rise substantially between 2015 and 2025. 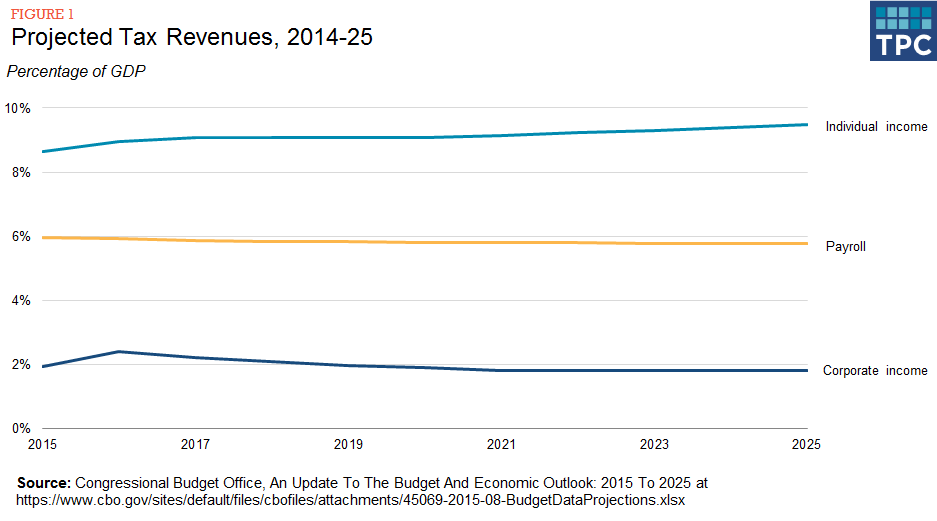 The CBO projection assumes that dozens of special interest tax breaks that expired last December will not be resurrected. If they are restored and made permanent, projected revenues would fall by nearly $1 trillion over the next decade.

The expected rise in individual income taxes is largely due to a phenomenon known as real bracket creep. Income tax rates are mostly indexed for inflation so nominal increases in income don’t boost effective rates. But when incomes rise faster than the rate of inflation, as CBO projects in a growing economy, that income is pushed into higher tax brackets. As a result, CBO figures individual income taxes will rise by 0.6 percent of Gross Domestic Product by 2025.

Much of the income growth will go to high-income households, driving a larger share of income into the highest tax brackets. Finally, as Baby Boomers age, more will pay tax on their withdrawals from tax-deferred retirement accounts such as IRAs and 401(k)s.

Payroll tax revenue will decline slightly over the next decade for a couple of reasons. One driver is the continued slowing of new deposits to state unemployment trust funds (which CBO treats as federal revenue). The other is faster earnings growth of high-income people, which will throw a greater share of wages over the current cap on Social Security taxes.

Corporate income tax revenue will rise over the next couple of years (assuming the tax extenders are not revived) but only from 1.9 percent of GDP to 2.4 percent. The main reason: The expiration of a law that allowed firms to more rapidly write off the cost of business equipment. But that effect will largely disappear after 2016. After that, CBO expects corporate receipts to steadily fall to 1.8 percent of GDP, slightly below today’s level.

While the top line of CBO’s revenue forecast for the next 10 years is flat, the numbers inside that projection tell a much more interesting story.