If the US continues today’s patterns of taxes and spending, the national debt will almost triple as a share of the total economy by mid-century. And, according to a new report by the Congressional Budget Office, the 2049 debt as a share of Gross Domestic Product (GDP) will be twice the size of the overall economy—vastly larger than ever before in US history.

In the unlikely event that Congress shows some fiscal restraint and allows the individual income tax provisions of the 2017 Tax Cuts and Jobs Act (TCJA) to expire at the end of 2025, and significantly limits growth in military and domestic discretionary spending, the national debt still will explode but with somewhat less force. By 2049, the debt as a share of the economy still would exceed the levels of World War II. 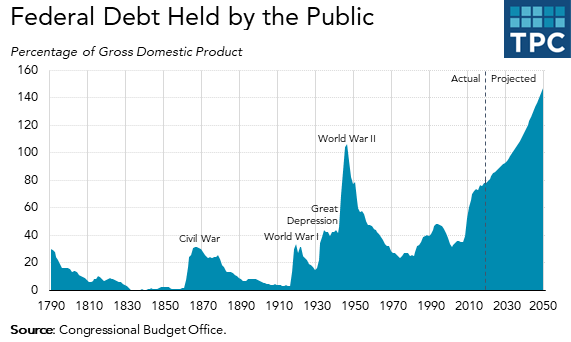 Even in that relatively positive scenario, which is CBO’s basic assumption, the story gets worse. By 2049, the government would spend 20 percent of its budget on interest on the debt. Except for health care and Social Security, interest payments would be the largest federal expenditure. In effect, the government would be spending more than three-quarters of its budget on payments to retirees, health care providers, and bondholders.

Interest spending alone would more than double as a share of GDP from today’s levels. It would be such a big part of the budget, in fact, that the entire federal debt will be highly sensitive to interest rate assumptions. If rates, currently very low, average 1 percentage point less than CBO forecasts, the 2049 debt would fall from 144 percent of GDP in CBO’s base case to 107 percent. One percentage point more, and it would hit 199 percent of GDP.

CBO’s estimates are roughly similar to last year’s. After all, Congress did little in the past year to change the overall fiscal outlook. And a somewhat stronger-than-expected economy has improved the picture a bit.

Yet, the risk of still-higher deficits and debt seem to be growing. The House may soon debate a package of new tax cuts and a restoration of dozens of expired tax breaks that would add another $700 billion to the debt over the next decade. President Trump is demanding billions of dollars more in funding for border security and assistance for families that have been arrested at the border, with no plan to pay for it. And he may get it.

Some of those candidates, such as Sen Elizabeth Warren, have proposed tax increases on high-income households and corporations that are aimed at financing some of that new spending. Other candidates have shown little interest in even trying to pay for their new initiatives, or offered only vague promises of closing tax loopholes.

On the GOP side, some Republican lawmakers continue to insist that TCJA’s $1.5 trillion in tax cuts will eventually pay for itself by boosting economic growth, if only analysts give it time.

And the strong economy, which has kept deficits from rising as fast as some feared, is showing signs of slowing. That may be the biggest risk of all. With interest rates persistently low, the Federal Reserve has few of its traditional tools to simulate the economy. With federal debt projected to rise so much, Congress would similarly have little running room to boost the economy through fiscal policy.

For now, big deficits and growing debt have had little effect on the economy, thus Congress has shown no interest in taking the difficult steps to address fiscal imbalances. Should the debt begin to eat away at growth, Congress will be even less likely to raise taxes or cut spending.  There is, as we keep learning, no good time for politicians to confront what soon will be a record level of US debt.