CBO: The Government’s Era Of (Nearly) Free Money Is Over, At Least for Now

The federal government may once again have an opportunity to learn a painful lesson about the price of increasing debt and rising interest rates in an uncertain economy.

The Congressional Budget Office, in its just-issued Budget and Economic Outlook, forecasts a hair-raising increase in federal borrowing costs over the next decade. CBO estimates that net interest as a share of Gross Domestic Product (GDP) will roughly double over the next decade—from 1.6 percent to a decidedly uncomfortable 3.3 percent. That’s a significant increase from last year’s forecast of 2.7 percent. 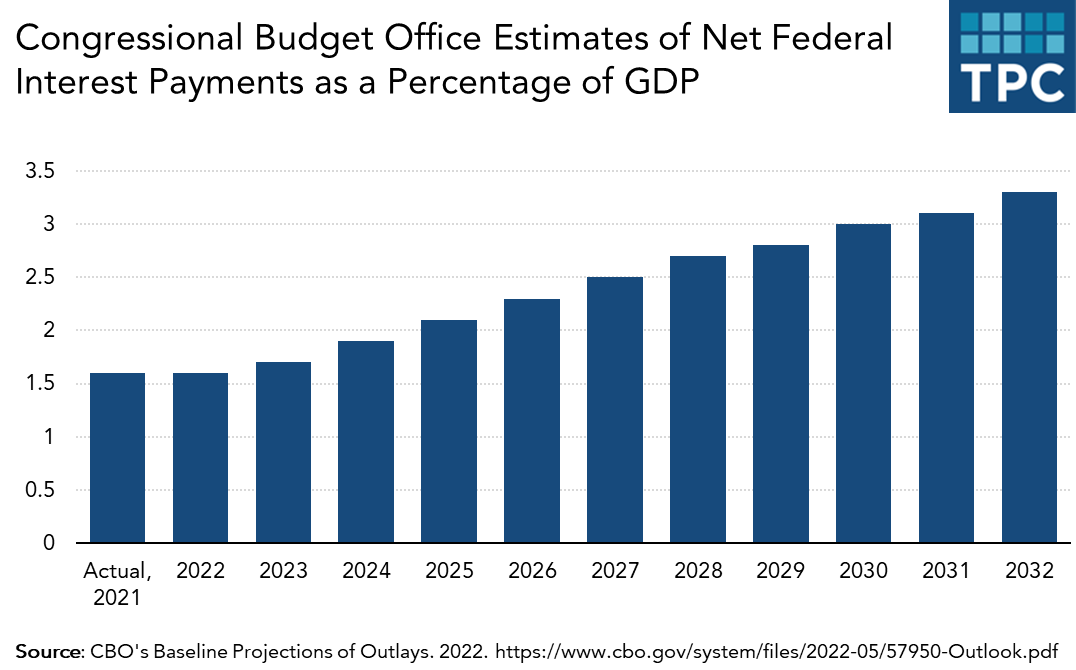 To put it another way, the US government will spend more than $8 trillion in interest over the next decade, nearly 11 percent of its total spending. For context, in 2032, the feds will pay more in interest than for any other federal program, except for Social Security and Medicare. CBO projects the federal government will pay $200 billion more in interest than it will spend  for national defense, assuming no changes in policy.

Keep in mind that these forecasts are even more uncertain than usual given the unpredictability of world events. But also remember that CBO’s forecast is likely to understate future debt because it is required to assume Congress will make no changes in tax law or spending. But it is unlikely that lawmakers will allow the individual income tax cuts included in the Tax Cuts and Jobs Act (TCJA) to  expire as scheduled at the end of 2025. And a continuation of decades of the post-Cold War peace dividend may be equally improbable.

In recent years, the 2017 TCJA and massive spending in response to the pandemic resulted in an historic increase in deficits and debt. But until recent months, interest rates still stayed near zero. So the effect on total government borrowing costs was muted.

Interest costs are a function of two main factors: the amount of outstanding debt and the interest rate government must pay on that borrowing. Over the medium term, the news is bad on both fronts.

Largely, but not entirely, due to big increases in Social Security and Medicare driven by the inexorable aging of the Baby Boomers, the debt is projected to increase from 98 percent of GDP this year to 110 percent in 2032, the highest ratio in US history. By 2032, CBO figures the national debt will reach $40 trillion.

The increased debt will add about 30 percent to interest costs. But rising interest rates will be a much bigger deal, accounting for the remaining 70 percent of the increase in borrowing costs.

Not what we are used to

Ten-year Treasury notes will follow the same pattern, CBO predicts. It expects the rate on the long bond to rise from 1.3 percent in 2021 to 3.8 percent in 2028 and stabilize there through 2032.

Compared to recent memory, that is shockingly high. But in fact, that’s roughly what it was a half-century ago, before the stagflation and the oil shocks of the 1970s and early 1980s sent rates to spectacular highs before a long decline began in the mid-1980s.

Will this come to pass? CBO produces its forecast with the advice of outside economists and produces as good a consensus forecast as you could find. But the economy is so uncertain, it is impossible to predict what really will happen.

And the current increase in inflation and interest rates may only be temporary. The factors that many economists felt were responsible for the decades-long secular fall in rates still are there, including the aging of western societies, the decline in globalization and productivity rates, and the growth of wealth inequality. Deglobalization, in fact, may accelerate. And, at a time of real uncertainty, investors may flock to US Treasuries as a safe investment, holding rate hikes in check.

None of this is knowable. But one thing does seem certain: The ability of the federal government to borrow almost for free has come to an end, at least for now.