For all the buzz about urban revival and city economic health, it’s not all about trendy small plate restaurants or abandoned factories-turned-coworking spaces. Central cities still bear an outsized burden of providing services and caring for low-income residents. Their public programs benefit suburbanites who commute into those cities. Yet, those suburban residents pay a relatively small share of the tax burden needed to fund those city programs.

Are there regional solutions to these challenges? Earlier this month, an Urban Institute conference highlighted some new takes on the old idea of regionalism and how federal, state, and local governments can work together to deliver prosperity and growth.

While commuters may benefit from public safety and general services that central cities pay for, they often expect urban school districts and central cities to foot the bill for educating kids and maintaining a social safety net. What is less visible is that benefits from these kinds of programs “spill over” into neighboring suburban areas.

New data from the American Community Survey help illustrate the disproportionate burden that central cities face when it comes to financing services for residents in need. In 2015, the poverty rate in central cities was 19 percent, but only 11 percent in surrounding communities. Despite concern about the growing suburbanization of poverty, the issue remains largely concentrated in principal cities of Metropolitan Statistical Areas (MSAs). 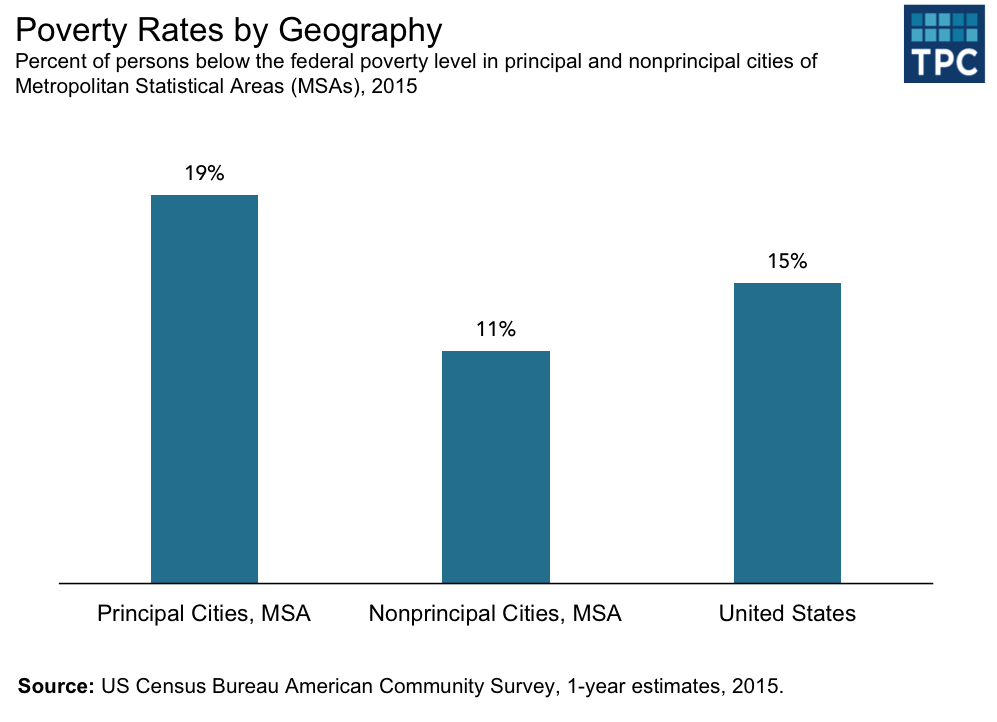 And, as Robert Inman reports in his paper Should Philadelphia’s Suburbs Help their Central City?, higher central city tax rates increase the incentive for mobile businesses and higher-income residents to migrate to the suburbs, creating potential for a downward fiscal and community spiral.

Can regional financing help solve the problem? On September 8th at the Urban Institute, Inman and other leading researchers and policymakers highlighted strategies for enhancing city economic and fiscal resilience. Here’s how Inman put it:

“I’m a big fan of regional financing for poverty services...Poverty spending…[is] going to lead, in an open economy, to the exit of productive economic activity, which undermines the economic base of the city….A regional sharing of poverty spending…will protect the tax base and contribute to the value of the region as a whole…The cost of providing public safety, and highways, and other sorts of public amenities has to fall on the broader region and not just on the locality where those things are located.”

The Urban Institute conference covered many themes, including how federal, state, and regional actors can promote city fiscal health. For more information, please see the conference paper by Michael Pagano and Chris Hoene on The Fiscal Policy Space of Central Cities and the Urban Institute’s fact sheet on Federal Aid to Local Governments.

You can view the full event webcast on the event homepage.