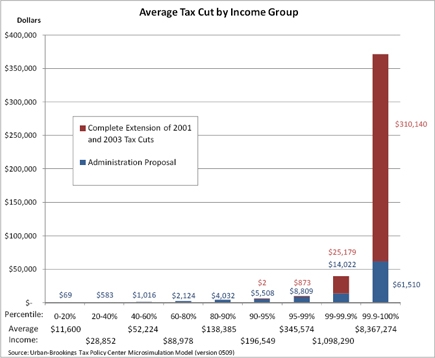 Another View of the Bush Tax Cuts

Adam Looney at the Brookings Institution has a nice new paper on the Bush tax cuts. It can be summarized in this picture: 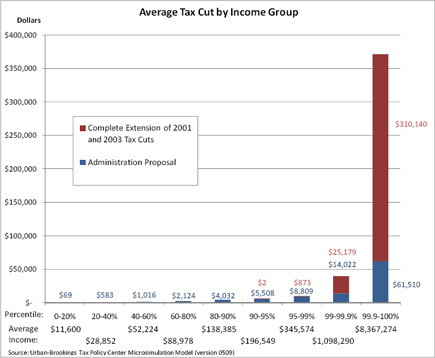 As Adam notes, the argument we are having is “whether to extend all of the tax cuts or merely to extend the vast majority.” Or, to put it a slightly different way: Do we want to “extend an extra $310,000 in tax relief to the wealthiest 120,000 taxpayers or …instead make a relatively small down payment toward fiscal responsibility?”

As Adam’s graph (and the Tax Policy Center analysis upon which it is based) shows, the highest 0.1% of earners (average income $8 million) would still benefit, to the tune of more than $61,000, even if the top rate is increased from today’s 35 percent to 39.6 percent, as President Obama prefers. How would they get a $60,000+ tax cut, relative to current law, if their rates are increased?

There are two big reasons. First, remember that Obama would extend the Bush tax cuts for income of  $200,000 or less ($250,000 for joint filers). Thus, high-earners would still enjoy the benefits of lower rates on their first few hundred thousand dollars of income. They would also benefit from Obama’s proposal to tax dividends at 20 percent since that levy would rise to 39.6 percent (the same as the top rate on ordinary income) if the Bush tax cuts are allowed to expire.

Now, keep in mind that Obama’s plan to extend the 2001 and 2003 tax cuts for nearly all--as opposed to all—would still add trillions to the deficit over the next decade. When Adam says the Obama plan would make a “small down payment toward fiscal responsibility” he means it would make the deficit less bad—relative to current law—than extending the tax cuts for everyone, including the highest earners. Still, in today’s political environment, adding $3 trillion to the deficit over the next decade is better than adding $3.7 trillion.

My view (which Adam does not necessarily share) is that given budget realities, Obama is wrong to propose extending the Bush tax cuts indefinitely for as many people as he does. I'd lower the threshold even further--perhaps to $150,000--and continue the tax cuts for only a year or two. But in any event, do we really want to extend them for a handful of the very highest earners as well?