The Tax Cuts and Jobs Act (TCJA) will shrink the number of households claiming an itemized deduction for their gifts to non-profits from about 37 million to about 16 million in 2018, according to new Tax Policy Center estimates. At the same time, the new law will reduce the federal income tax subsidy for charitable giving by one-third, from about $63 billion to roughly $42 billion.

Overall, the TCJA will reduce the marginal tax benefit of giving to charity by more than one-quarter in 2018, raising the after-tax cost of donating by about 7 percent.

The TCJA makes four big changes that are likely to discourage charitable giving. It lowers individual income tax rates, thus reducing the value of all tax deductions; and it caps the state and local tax deduction at $10,000 and increases the standard deduction to $12,000 for singles and $24,000 for couples—two steps that will significantly reduce the number of itemizers.

The new law also roughly doubles the estate tax exemption to $22 million for couples, which will discourage tax-motivated bequests by some very wealthy households. However, that change is not included in TPC’s estimates.

Before accounting of any changes in the amount of charitable giving, the law will cut the number of those itemizing their charitable contributions by more than half, to about 16 million. The share of middle-income households claiming the charitable deduction will fall by two-thirds, from about 17 percent to just 5.5 percent.

Even among those making between $86,000 and $150,000, the percentage of taxpayers itemizing their charitable gifts will plummet from about 39 percent to 15 percent. And because many fewer relatively small givers will continue to deduct their gifts to non-profits, the average tax benefit from charitable deductions for all households will increase from about $1,700 to $2,600. 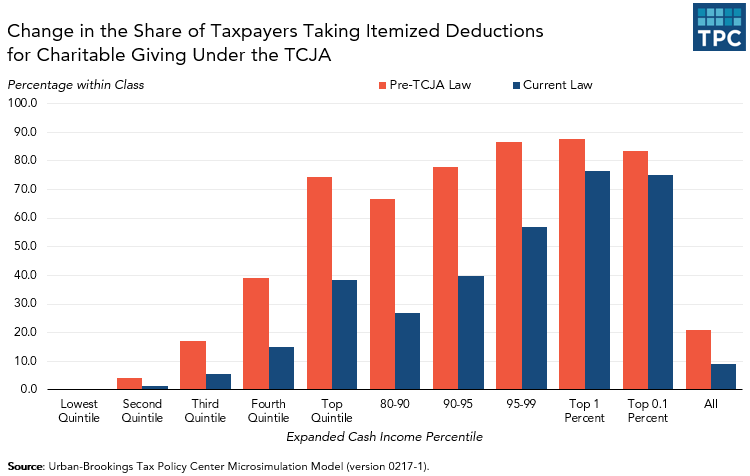 Of course, people don’t give to charity just to get a tax deduction. Millions of non-itemizers contributed each year under the old tax law and many will continue to do so under the TCJA. However, last November, my TPC colleagues Joe Rosenberg and Philip Stallworth estimated the income tax provisions of the House version of the TCJA would reduce charitable giving in 2018 by between about 4 percent and 6.5 percent, or between $12.3 billion and $19.7 billion.

The final version of the TCJA is slightly more generous to tax-motivated givers than the House bill. For example, it retains a piece of the state and local tax deduction, which will cause fewer taxpayers to shift to the standard deduction. But, like the House version, the new law is likely to reduce charitable giving by somewhere in the neighborhood of 5 percent. And those gifts will come from fewer—and richer--givers.