Would Workers Benefit From A Corporate Tax Cut? Not Much

President Trump and congressional Republicans are pressing ahead on a tax bill that will almost certainly include a major corporate tax cut. And they are framing their push for such a measure around the claim that workers will be the big beneficiaries of those corporate tax reductions.

The core of their argument is this: If government reduces taxes on corporations, firms will invest their higher after-tax profits in plant and equipment that will boost worker productivity and result in higher wages.

In a Sept 3 Fox News interview, Treasury Secretary Steven Mnuchin said it this way: “Most economists believe that over 70 percent of corporate taxes are paid for by the workers.” Or to put it in the context of the current tax debate, Mnuchin implied that workers would get 70 percent of the benefit of a corporate tax cut.

In fact, most economists don’t believe this. The issue has been studied for decades and remains a topic of intense debate. Economists have looked at empirical data and crunched the numbers based on their theoretical models. While it is hard to say what most economists think about anything, a fair reading of the literature suggests that while workers do bear some of the burden of the corporate tax, they don’t bear much. Thus, they would not benefit much from a corporate tax cut.

Before we dive too deeply into this, it is worth taking a minute to address to more basic question: Do humans pay the corporate tax at all? While it doesn’t seem intuitive, they do. Corporations are nothing more than a convenient legal way for people to organize a business. In the end, a corporation is only a vessel that hires workers, buys equipment and inventory, and (hopefully) makes profits for its owners. The argument, then, is not over whether people ultimately pay business taxes but which people, and how much.

The Congressional Budget Office  and the congressional Joint Committee on Taxation figure workers pay about 25 percent of the corporate tax through lower wages. In 2015, the career staff at Treasury calculated the worker share at 19 percent.. The Tax Policy Center uses a middle-ground assumption of 20 percent. JCT, CBO, and TPC used to assign the full value of the corporate tax to shareholders and lenders but have tempered that view in recent years.

In the standard analysis, most of the corporate tax results in lower profits, thus the burden falls on shareholders. And they’d benefit most from a cut in corporate taxes since they’d earn higher returns. Here is a short non-geeky explanation of that view from Jared Bernstein, who was chief economist for vice-president Joe Biden and is now at the Center on Budget and Policy Priorities.

A key issue is how the increased mobility of capital compared to relatively immobile labor affects the story. Most economists, including Gabriel Zucman, Thomas Piketty, and Emmanuel Saez, believe the corporate income tax has largely caused companies to shift profits but not investment to lower-taxed jurisdictions. They argue that companies are merely avoiding US tax, not shifting actual production abroad, and therefore very little, if any, of their burden is shifted to labor.

Mnuchin and others in the Administration don’t buy it. He told Fox, “The fact that the Treasury Department, I think it was eight or 10 years ago, put out a piece otherwise. I don't believe in that. Our current economic team does not believe in that.”

Indeed, some economists are convinced that labor pays the bulk of corporate taxes through lower wages. A leading proponent of that view is Kevin Hassett, a long-time economist at the American Enterprise Institute who is now the president’s nominee to chair the White House Council of Economic Advisers. Hassett has argued that a 1 percent increase in corporate tax rates would reduce wages by 0.5 percent and that workers bear nearly all the burden of the levy.

Let’s say some chunk of higher corporate taxes does fall on workers. The next question is: Which ones?

In recent years the long-time link between higher productivity and wage growth seems to have broken, not just in the US but throughout the developed world.

As a result, most workers have received only small increases in wages. The exception: High income workers. CBO found that in 1979 wages for the top 10 percent were 80 percent higher than the median wage. By 2009, their wages were 132 percent higher. In other words, even if a corporate tax cut does help workers, it is likely to benefit high-income workers and corporate executives the most. 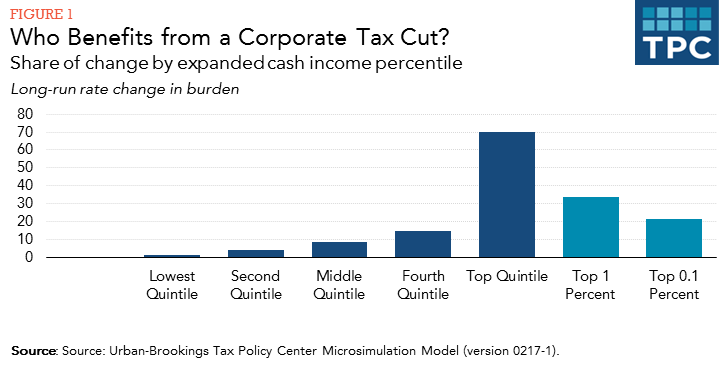 Would middle-income workers benefit from a corporate tax cut? Probably, but not very much. The big winners likely would be investors and top managers.

Workers assembly a Boeing's 737 MAX airplane wing at the company's production facility Monday, Feb. 13, 2017, in Renton, Wash. Boeing plans to deliver its first 737 MAX airplane by May. Boeing's latest innovations inside its Renton factory includes new robotic machines as well as more efficient ways of deploying its mechanics. The company is also increasing its 737 production rate to 47 per month, from 42. (AP Photo/Elaine Thompson)