We know the pandemic and the policy response to it dramatically increased the number of households that did not pay federal individual income tax in 2020 and will do so again this year. The bump was transitory, caused by a troubled 2020 economy and enactment of massive but temporary tax cuts.

But what would happen to the number of non-payers if Congress extends one set of tax changes—the more generous refundable tax credits for low- and moderate-income households first approved by Congress earlier this year?

A new TPC estimate finds that continuing those generous tax benefits would have a noticeable, but relatively modest, impact on the number of federal income tax payers.  If the credits are continued, 45 percent of households would not pay federal income tax in 2022, compared to a bit less than 42 percent if the higher credits are allowed to expire. 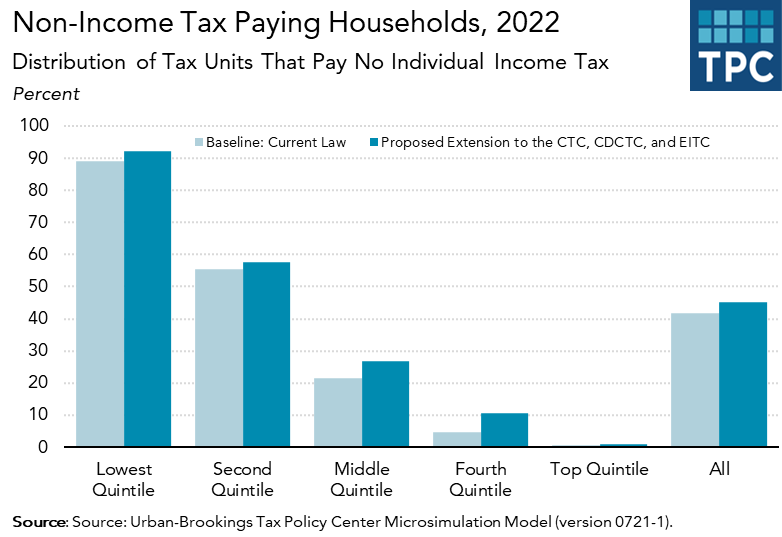 It is an important question because President Biden and congressional Democrats have made no secret of their enthusiasm for continuing the more generous credits that include the Child Tax Credit (CTC), the Earned Income Tax Credit (EITC) and the Child and Dependent Care Tax Credit (CDCTC). Congress made all of them more generous as part of the American Rescue Plan it passed in March.

Overall, the share of non-payers still would be significantly lower than in 2020, when it approached 61 percent, or this year, when it is expected to top 57 percent.

Relative to allowing the expanded credits to expire, continuing the more generous credits would increase the number of non-payers for nearly all income categories. But the largest percentage increase would be among households with annual income between about $100,000 and $180,000 (the fourth quintile of income). The share of non-payers in that group would more than double, from about 1.4 million to 3.2 million, or from 4.5 percent to about 10.5 percent.

By contrast, the number of non-payers among the lowest income households would rise only slightly, from 89 percent to 92 percent in 2022.

TPC’s analysis highlights the importance of the expanded CTC and CDCTC for middle-income families with children. Next year, nearly 62 percent would be non-payers if the expanded credits are extended while only 35 percent will be off the rolls if the more generous credits are allowed to expire as scheduled under current law.

The limited impact of extending the more generous credits suggests the big boost in the number of non-payers in 2020 and in 2021 primarily has been due to two other factors—the multiple rounds of Economic Impact Payments (EIPs or stimulus payments) and the poor pandemic economy that cost more than 20 million workers their jobs and reduced hours or pay for tens of millions—mostly in 2020.

It is unlikely that the nation will see more EIPs in the near future. And, despite the current resurgence of COVID-19, the economy appears on a relatively strong footing. Thus, the share of non-payers is likely to fall sharply next year, whether or not Congress decides to extend those generous refundable tax credits.