Why We Should Stick With A 10-Year Budget Window

The Congressional Budget Office is always under pressure to do something differently, usually by lawmakers trying to get a more favorable budget score for their ideas. Recently this has led to some highly-publicized criticism. It has also led some legislators to demand that CBO stretch out its forecasting period from the current 10 years to 20 years or more.

There are at least two related problems with routinely using longer-range projections. First, forecasts a decade or more out in the future are highly uncertain. Second, seemingly small changes in the projected growth rates of key variables (such as GDP per capita or Medicaid spending per enrollee) compound over 20 years and can cause large swings in projected spending and revenue. CBO can address the first problem by publishing forecast ranges for those future years and the second by smoothing changes to its projections.  Even so, policymakers dislike ranges and are likely to ignore them. And routinely estimating the effects of tax or spending bills over such a long period could compromise the quality of projections and will serve Congresses poorly.

In its recently released cost estimate of the Better Care Reconciliation Act of 2017, CBO projected that after 10 years the bill would increase the number of uninsured by 22 million and reduce Medicaid spending by 26 percent below baseline projections. That dire prediction, among others, helped to slow down the rush to reform health care and once again demonstrated CBO’s importance in the legislative process.  Along the way, in response to a request by Senators Ron Wyden (D-OR) and Bernie Sanders (I-VT), CBO forecast that after 20 years, BCRA would cut Medicaid spending by 35 percent below its baseline projections.

CBO warned that predicting such complex changes over such a long period is almost impossible. Thus, the agency replaced its usual sophisticated modeling of Medicaid costs with a simplified approach based on “fairly mechanical projections of growth” in per-enrollee spending. They also warned that the method only works when bills ”affect spending in a similarly straightforward manner.”

Despite these warnings, some GOP legislators have suggested that the effects of upcoming tax bills be estimated over 20 years rather than 10 years. Currently, tax bills can be passed through the reconciliation process —making them immune to being filibustered—only if they do not increase the federal budget deficit after the tenth year. One way to accomplish that is to have the net tax reductions sunset in the tenth year. Scoring over 20 years would allow bills that increase the federal debt after the tenth year and sunset by the 20th year to be passed through the reconciliation process. This too puts the credibility of budget scoring at risk.

Until 1996, CBO projected its baseline estimates and scored bills over just a five year period.  However, in part because of interest in the long-run effects of the 1997 Balanced Budget Amendment, ten year projections became the norm. As a long-time CBO staffer, I saw firsthand the careful work that goes into its projections.

Nevertheless, all forecasts, including CBO’s, are uncertain. The economic outlook is unclear because factors such as interest rates, employment, and inflation are unpredictable. There is also uncertainty over ‘technical factors’ such as the rate of growth of medical costs. Estimating the effects of legislation introduces additional uncertainty about the potential responses. For example, CBO’s recent BCRA cost estimate necessarily made assumptions about the reactions of “federal agencies, states, insurers, employers, individuals, doctors, hospitals, and other affected parties.” 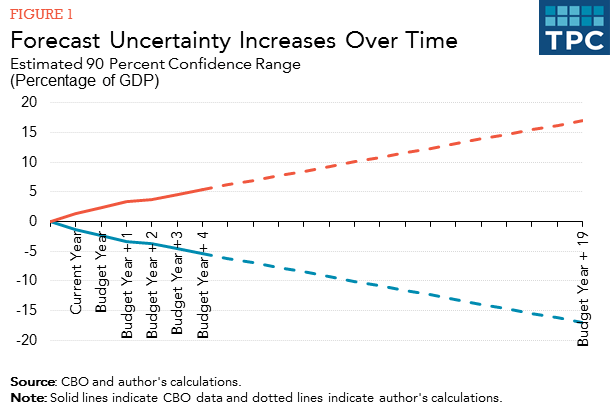 Budget estimates are very sensitive to underlying assumptions.  For example, suppose CBO used a slightly different growth rate in Medicaid spending per enrollee in a 20-year forecast of the BCRA.  Even a tiny difference would compound over time and after two decades it could lead to outsized variations in projected Medicaid spending. Just as a parent can place one foot near the center of a seesaw and move a child up and down, small changes at one end of the budget window can lead to big swings at the other.

CBO could prevent those wild swings by holding its foot steady on the growth rates used to score the BCRA and other bills. That would mean updating its models less frequently or giving new data less weight. But this would make forecasts less accurate and critics of CBO’s health scores already are criticizing the agency for using data — as directed by the budget committees —that they believe isn’t recent enough.

Moving to a 20-year budget window for estimating the effects of legislative proposals would increase uncertainty and give Congress two unappealing options. It could receive cost and revenue estimates that are highly sensitive to small changes in growth assumptions or behavioral responses to legislation, leading to a lack of precision in the long-term estimates. Or it could work with more stable but less accurate forecasts from models that it updates very slowly. Absent changes in the legislative process the better choice is to stay the course and stick with a 10-year window.