Why the Tax Code is a Mess, Graphically 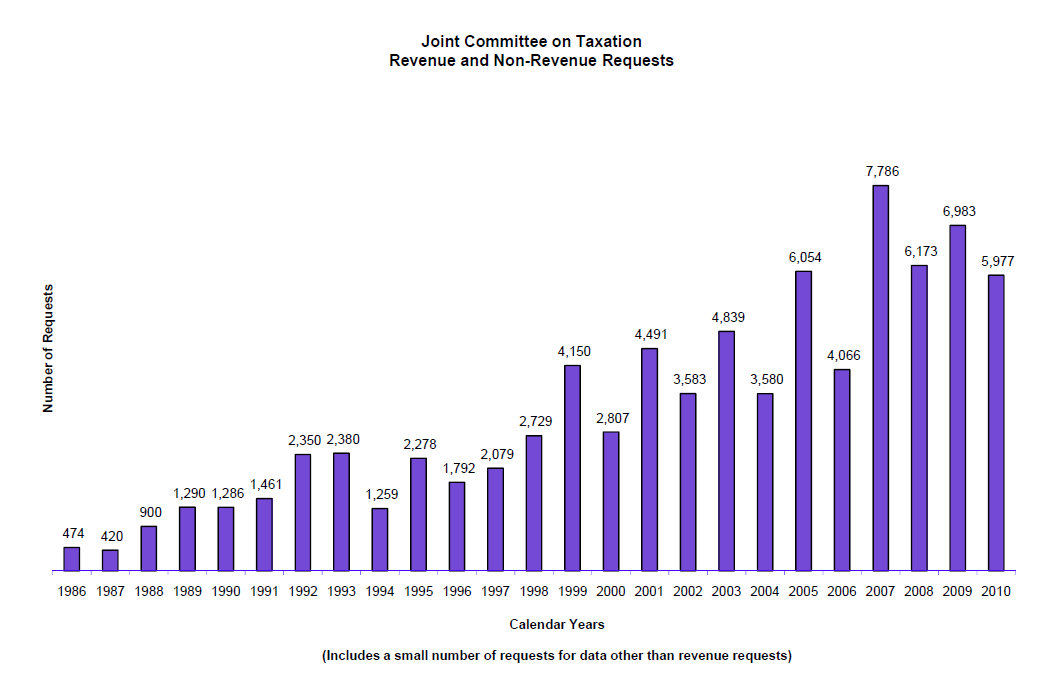 I just came across this bar chart, which illustrates graphically why the tax code is such a mess.  The Joint Committee on Taxation (JCT) is the official scorekeeper for all tax legislation passed by the Congress.  The chart shows the number of requests for estimates and other analysis that they've received from Congressional offices since 1986. Most of the requests are for estimates, which are necessary if a member wants to get a piece of tax legislation seriously considered.  The chart doesn't say how many are for new credits, deductions, or other tax breaks (although a quick perusal of the Congressional record suggests that proposals for tax breaks far outnumber proposals for new taxes or tax increases). It doesn't say how many came from members of the Ways and Means Committee and Senate Finance Committee, which are actually responsible for tax legislation, or from other members whose efforts in the tax arena are purely symbolic unless they find a cosponsor on a tax-writing committee. 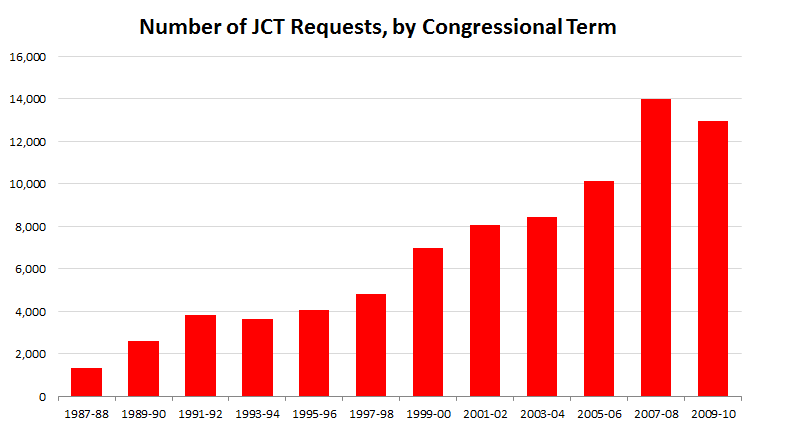 Here are the same data grouped by Congressional term.  (Most of the requests are made early in each two-year Congress as members try to get their great new ideas on the agenda.)

It would be nice to think that our legislators are working hard trying to find ways to make our tax code simpler, fairer, and more conducive to economic growth. (One member, Senator Ron Wyden of Oregon, has worked tirelessly to try to advance the cause of tax reform, but he has few allies in this quest.)  Maybe some are even pondering how to raise enough revenue to pay for the government. But I doubt that's the prime driver.  The tax code has now become the tool of choice to give away goodies.

It is the 21st century pork barrel.

Fortunately, the JCT only has time to look at a fraction of the great tax ideas coming out of Congressional offices. Nonetheless, some real doozies still squeak through.  And that's one reason why our tax code is such a mess.

Corrections: An earlier draft referred to Congressional sessions when I really meant Congresses--the two-year term that includes two Congressional sessions. We are currently in the first session of the 112th Congress. The second chart shows data for each Congress from the 100th Congress (1987-88) to the 111th (2009-10). I also removed the modifier "tiny" before the fraction of requests JCT could handle. As far as I know, the actual number of requests that JCT responds to is not made public. I know from conversations with JCT staff and Hill staff who request estimates in vain that JCT can only satisfy some of its requests, but don't know how small the fraction is.