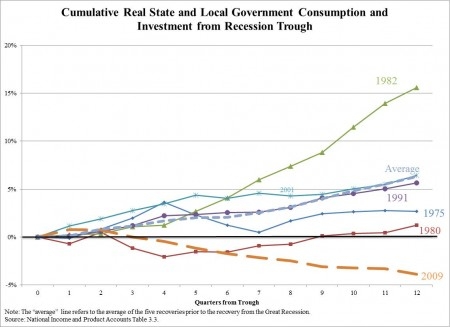 Why State and Local Governments are Hurting the Recovery

Until the Great Recession, state and local governments played a remarkably constant role through down business cycles. For four decades, when the economy turned sour, state and local governments boosted their spending—mitigating the depths of recessions and adding to growth when the economy revived. (Of course, this growth was partially offset by the negative effect of taxes collected to pay for that extra government spending.)

It was different this time.  State and local governments addressed looming budget gaps by cutting expenditures. Instead of contributing to growth, their budget cuts dragged down the recession even further. And when the economy turned a corner in mid-2009, state and local government consumption (i.e., current spending on government programs like police and fire departments, education, and health) and investment remained depressed—a big reason why the recovery has been so weak.

In a new paper, my Tax Policy Center colleague Yuri Shadunsky and I show what happened. Never before had the state and local consumption and investment been negative three years into a recovery, but in 2009, it was down by about 4 percent (see chart immediately below). 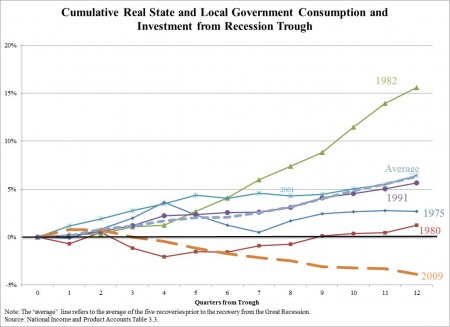 What was different? First, the Great Recession was longer and more destructive than any other post-war recession. The severity meant that many state rainy-day funds, which had been replenished after the 2001 recession and are designed to help states weather downturns, were insufficient to protect against the slump.  Second, state and local governments were reluctant to sufficiently raise taxes to cover the decline in revenue (many states did raise taxes through higher rates or base broadening, but these measures replaced only a fraction of the lost revenue due to the recession). And third, the steep decline in housing prices meant that property tax revenues collapsed, though this took a while because assessments often lag changes in market value. 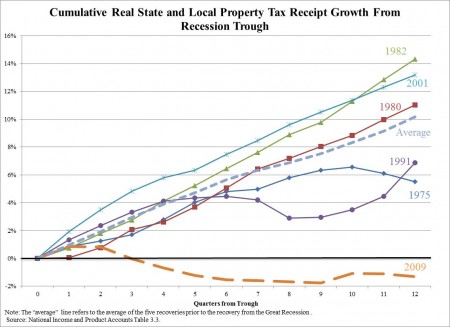 These trends reinforce what millions of homeowners and the long-term unemployed already know: This recession and subsequent recovery are very, very different.