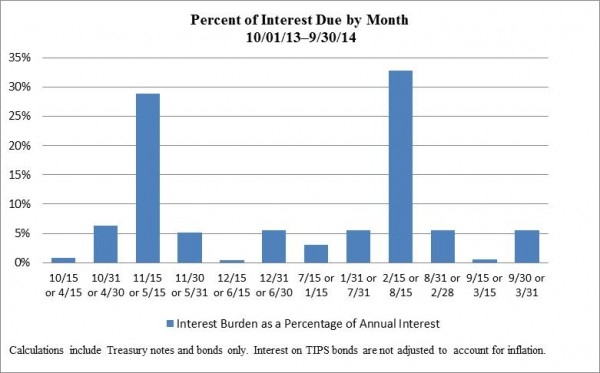 Why the Next Debt Limit Debacle Might be Worse

Congress’s latest flirtation with debt-limit default caused barely a ripple in the financial markets. Rates on short-term Treasuries spiked in early October, before quickly subsiding to more normal levels. The spread between one- and three-year Treasuries temporarily widened, but quickly fell back to a more normal trend. All told, financial markets barely blinked. Unfortunately, the next time may be worse. Here’s why.

If Congress is going to threaten the country with defaulting on bond payments, late October is a relatively good time to do it. In the year spanning October 1, 2013 to September 30, 2014, just 0.8 percent of interest payments were due on October 15st and only 6.3 percent were due on October 31st. (These calculations include Treasury bonds and notes, but not T-Bills.)

The small share of interest payments due in October meant that financial markets could absorb the threat of default—however small—without causing too much disorder. Money market funds could request that collateral come from the vast majority of bonds that would not be in default if no agreement were reached by the end of the month. Repo markets could charge higher rates on the small share of bonds scheduled to receive a payment on these days without disrupting the market for Treasuries too much.

The key point is that the threat of default does not affect all Treasuries equally, especially if the default is expected to be short-lived. If the market expects the fiscal disturbance to last only, say, a few weeks, payments would be missed (or more likely delayed) on only those bonds due to receive payment in the given timeframe. While a missed or delayed payment would undoubtedly have dire consequences for all Treasury securities, the expectation of a missed or delayed payment appears to have more severe effects only for those Treasuries with payments due near the expiration of Treasury’s borrowing authority.

Under the last-minute agreement reached on October 17th, the debt limit is suspended through February 8th. Unlike last October, large shares of Treasury interest payments are in mid- and late-February. As shown below, about one-third—32.8 percent—of Treasuries are owed payments on February 15th and another 5.5 percent are owed payments on February 28th (see chart). This time, money market funds and the repo markets might have more trouble handling the threat of default.

With such a large share of Treasuries potentially becoming toxic from the perspective of repo market and money market funds, the worry is that yields might spike. Demand for Treasuries not owing interest on February 15th or February 28th could rapidly increase, and market players might seek to replace these Treasuries with other highly rated securities. If this happens, we could see the differentiation between those Treasuries with payments due in February 2014 and those without.

The folks at the Bipartisan Policy Center, who have been closely tracking government cash flows, estimate that a binding borrowing limit will be reached sometime towards the end of February or early March, but this date could be moved up if expected tax revenues fall short. The Congressional Budget Office expects the hard borrowing limit to be hit in March, but notes that this date could fall to April, May, or early June if tax receipts exceed expectations. Judging by the chart below, a mid-May borrowing limit would be much worse than April or June.

The country’s last go-round with the debt limit was resolved before catastrophe, perhaps indicating that members of Congress do indeed understand the dire consequences of failing to pay bills owed. But the real point here is that even kicking the tires on default might be costly, and that the costs will probably rise if the budget mess resurfaces in February or May. Let’s not find out 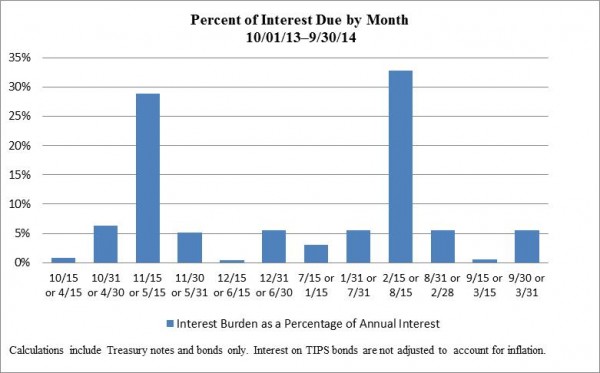