A few years ago, the Internet went wild over a photograph of a dress.  Was it blue and black, or white and gold?  Many people were flabbergasted that others could see the same picture so differently.

That’s what our fiscal situation looks like as well. Some see a revenue problem; others are just as convinced that the government has a spending problem. My view, which I describe in a new book, Fiscal Therapy: Curing America’s Debt Addiction and Investing in the Future, is that we need to address both sides of the ledger.

Under current policies, the federal debt will rise from 78 percent of gross domestic product (GDP) – already the highest level in history other than around World War II – to almost 180 percent of GDP by 2050.

What’s causing this historic rise?  Well, it’s like the dress: It depends who you ask.

This graph shows projected federal government spending and revenue from 2018 through 2050. Outlays are projected to rise substantially, from 20.6 percent of GDP to 28.0 percent.  Revenues will rise from 16.6 percent to 18.4 percent. 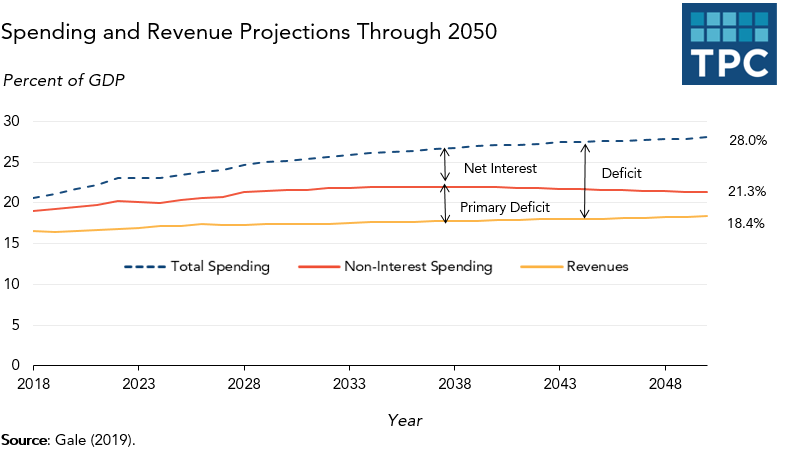 To many conservatives, the figure displays a spending problem. After all, spending is rising while revenues remain relatively flat. The solution, according to that perspective, would be to cut spending.

Many liberals object to this formulation because the rise in spending is not due to new programs.  Most of the increase is caused by higher interest payments, which are deferred payments on prior deficits. Those shortfalls were produced by a combination of excessive spending and inadequate revenues in earlier years. There is no reason they should be addressed solely with future spending cuts.  The rest of the increase is simply the government fulfilling the commitments it made years – indeed decades – ago. For example, Social Security costs are rising as the population ages. Those aging Baby Boomers and rising healthcare costs are driving up Medicare spending.  Total spending on everything else is falling as a share of GDP.  In this view, legislators have failed to commit enough money to finance the spending they already have authorized, and the long-term fiscal shortfall is a revenue problem that requires tax increases.

In the book, I focus on a third interpretation:  There is a chronic imbalance between what Americans want from government and what they are willing to pay, and that imbalance is growing over time.  Under this interpretation, it will take both sides of the scissors to do the cutting.

I explain that America faces two distinct but related problems. Steadily rising federal debt will make it harder to grow our economy; respond to wars, recessions, and social needs; and maintain our role as a global leader.  At the same time, an increasingly fractured society has left many people behind. We have let critical investments lag even as overall prosperity has grown.

These complex problems require multiple solutions:  Congress should control spending on programs such as Medicare and Social Security while enhancing their anti-poverty and social insurance roles. At the same time, it should increase public investments in human and physical capital and raise and reform taxes to pay for government services in a fair and efficient manner.  To provide context for these ideas, Fiscal Therapy includes primers on the history, economics, and politics of the public debt.

As with that Internet dress, we each see fiscal policy through our own lens.  But whichever way you look at it, the chasm between spending and revenue is real. And the economic choices we make to close that gap will shape our own living standards as well as the society our children will inherit.