Unemployment Benefits Are Taxable Income: That May Reduce EITC Refunds Next Spring

Many low- and moderate-income households no doubt were assisted greatly by enhanced federal Unemployment Insurance benefits that they received earlier this year and would be thrilled to receive a second round—if Congress and President Trump ever agree on a new pandemic relief bill. But for many jobless workers and their families, those payments come with a catch: They may result in smaller refunds from tax credits such as the earned income tax credit (EITC), next spring.

The problem: Unemployment Insurance (UI) benefits are taxable income but do not count as “earnings”. That means these benefits can lower, but not raise, the EITC, potentially leaving some low-income families with an unwelcome surprise at tax time. People will owe income tax on UI benefits, because they may not have had any income tax withheld when their UI benefits were received. For many lower-income families, that will mean part of those UI benefits will be clawed back in the form of a reduced EITC. That’s a special problem since research shows low- and moderate-income families plan for that annual tax refund, thoughtfully allocating it in advance towards paying past-due bills and laying the foundation for future savings.

On net, many families will receive more government support from the combined enhanced UI benefits and a smaller EITC than from what they anticipated their EITC would be. But losing part of their refundable credit next spring will diminish the value of this year’s jobless benefits for many recipients.

The IRS delivers refundable credits—payments in excess of taxes owed—through a refund during tax-filing season. But a possible problem is caused by the EITC’s complicated eligibility rules and payment formula that includes both a phase-in and a phase-out for the credit amount. Starting from zero, the amount of EITC that a taxpayer can claim increases with each dollar earned (wages, salaries, and income from self-employment count) until it hits a maximum amount. As earnings continue to increase, people receive the maximum amount for a given range of income. Then the EITC that can be claimed begins to decline as earnings rise further until it disappears entirely. (My colleague, Len Burman, has a plan to eliminate this phase-out.)

The way the phase-out process works is tricky. Would-be recipients with income in the phase-out range essentially calculate the credit twice—first based on their earnings, such as wages, and again based on their Adjusted Gross Income (AGI) that includes unemployment benefits. If their AGI is higher than their earnings, they get the lesser amount. This means that receiving UI benefits can decrease the EITC, but cannot increase it.

How the EITC Responds to Lower Earnings

A reduction in earnings can affect the amount of EITC that a taxpayer can claim in three ways: It can increase the credit if a family otherwise would have earned too much to receive a payment or if earnings would have been in the phaseout range (Figure 1); it can reduce the credit by shifting a family from eligibility for the maximum credit to a smaller credit amount if the lower earnings are in the phase-in range (Figure 2); or it can eliminate the EITC entirely if a family loses all wage earnings (Figure 3). 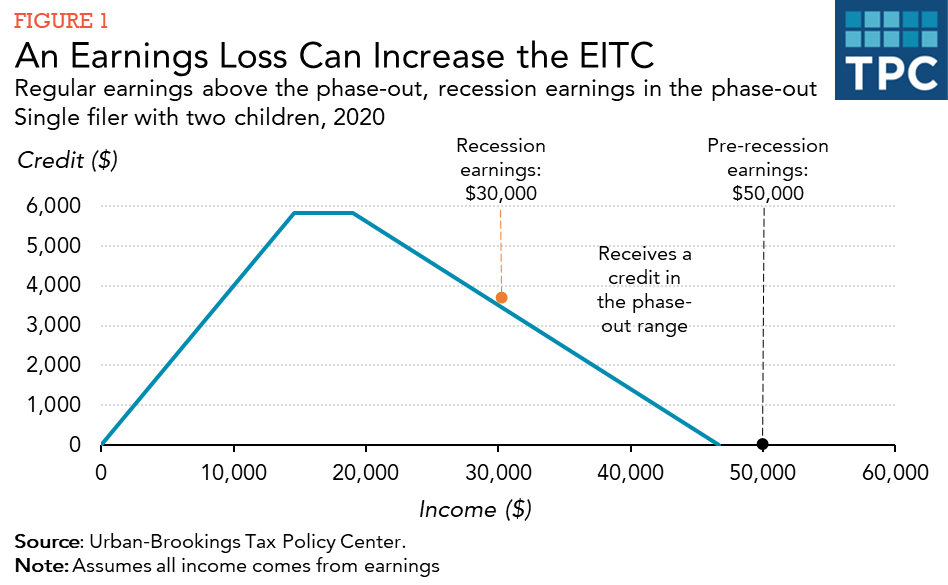 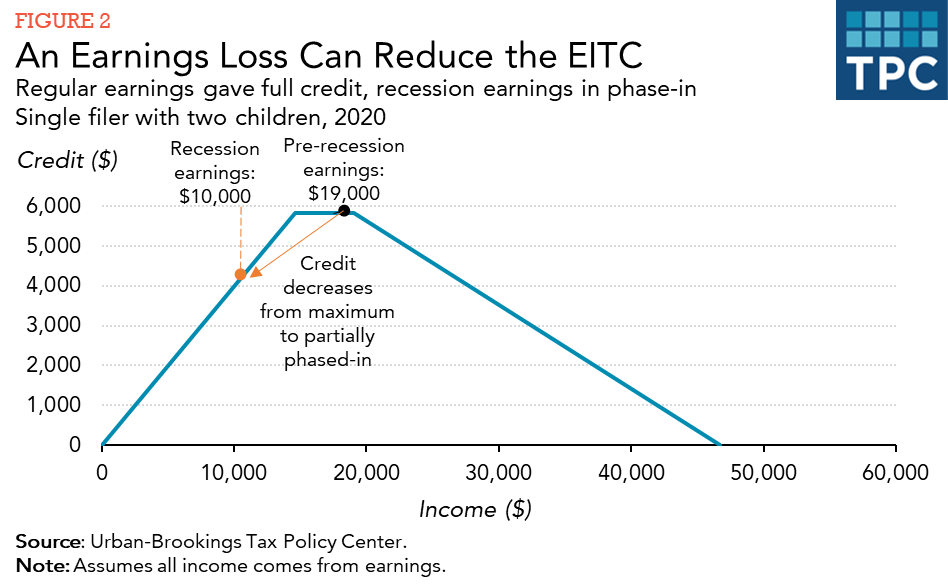 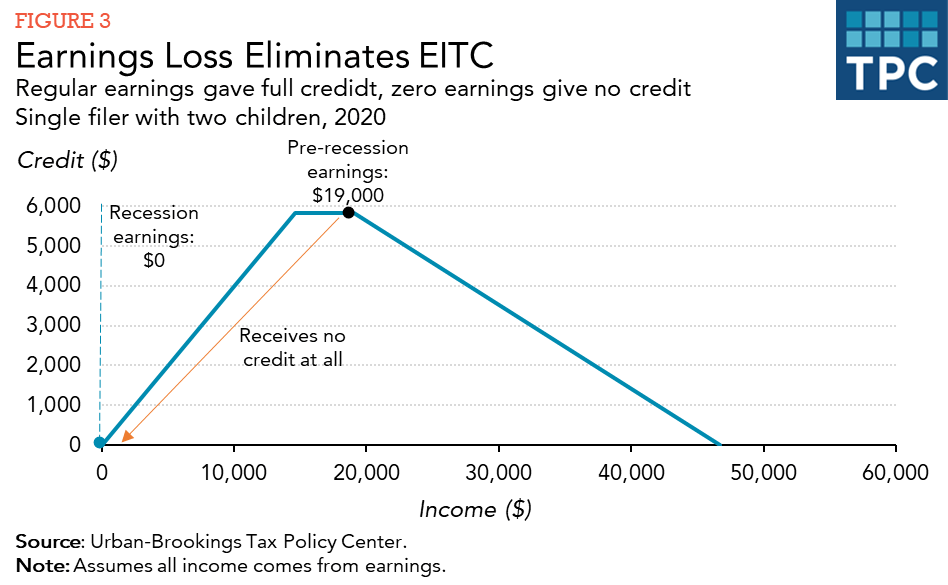 During the Great Recession that began in 2008, more people saw their EITCs increase (as portrayed in Figure 1) than drop (as shown in Figures 2 and 3). But this current recession could show a very different effect: Jobless workers already have received almost $440 billion in UI benefits, more than three times as much as was received in all of 2009. And these UI benefits certainly have been critical for many workers.

But unlike other types of aid delivered in the wake of the coronavirus, UI might reduce the EITC for families who continue to struggle. To be clear, for these families net annual income may go up in 2020 compared to 2019 thanks to the enhanced UI benefits. But these families may not be getting their expected EITC refunds next spring, potentially dealing them an unexpected financial blow.

Recipients could have their refunds reduced further if they haven’t had taxes withheld on UI benefits: recipients have the option of having income tax withheld from their UI check at a 10-percent rate. But not everyone makes this choice, and that also may make for a negative surprise at tax time.

Congress could fix the problem by allowing families to choose whether to include jobless benefits in AGI for purposes of calculating the EITC. Rather than calculating the credit by taking the lesser of earnings or AGI, the 2020 tax form could direct families to use whichever measure yields the greater credit. Others have suggested simply choosing the larger of a family’s EITC from 2019 or 2020. That could also work, but this approach ignores the complicating factor that families change from year to year and along with them so do tax filing units.

In all likelihood, many families still will be hurting when they file their 2020 income tax returns next spring. Congress could legislate a new approach that would allow families to maintain a source of income they’ve come to rely on.

Job seekers exercise social distancing as they wait to be called into the Heartland Workforce Solutions office in Omaha, Neb., Wednesday, July 15, 2020. Nebraska reinstated job search requirements this week for most people claiming jobless benefits. Those unemployment insurance requirements were suspended in mid-March to help employees who had lost their jobs due to the coronavirus. (AP Photo/Nati Harnik)