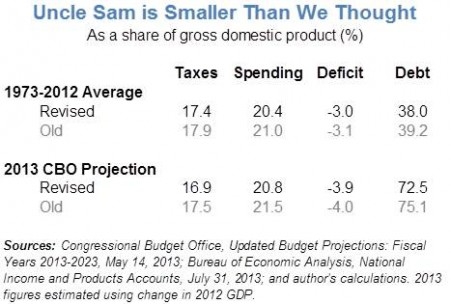 Uncle Sam Is Smaller (Relatively) Than We Thought

Federal spending fell from 21.5 percent of gross domestic product to 20.8 percent, while taxes declined from 17.5 percent to 16.9 percent.

To be clear, the government is spending and collecting just as much as it did yesterday. But we now know that the U.S. economy is bigger than we thought. GDP totaled $16.2 trillion in 2012, for example, about $560 billion larger than the Bureau of Economic Analysis previously estimated. That 3.6 percent boost reflects the Bureau’s new accounting system, which now treats research and development and artistic creation as investments rather than immediate expenses.

In the days and months ahead, analysts will sort through these and other revisions (which stretch back to 1929) to see how they change our understanding of America’s economic history. But one effect is already clear: the federal budget is smaller, relative to the economy, than previously thought. 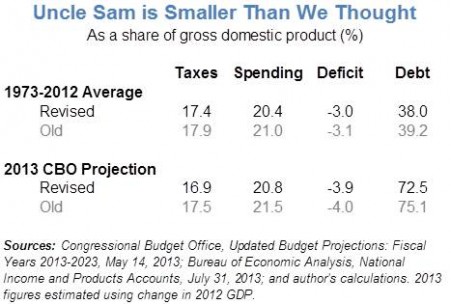 These changes have no direct practical effect—federal programs and tax collections are percolating along just as before. But they will change how we talk about the federal budget.

Measured against an economy that is bigger than we thought, Uncle Sam now appears slightly smaller. Wonks need to update their budget talking points accordingly.