While state results may have attracted less attention than US House and Senate races, Tuesday’s elections also resulted in shake-ups in some state capitols.  And if history is a guide, the switch from Republican control to divided government or even Democratic control could change the way states respond to budget shortfalls. But not necessarily in the way you think.

Overall, Tuesday favored state house Democrats. They took control of at least seven more governors’ mansions, replacing Republicans in Illinois, Kansas, Maine, Michigan, Nevada, New Mexico and Wisconsin while Republicans picked up Alaska (where the current governor is an independent). Overall, the nation is expected to have 23 Democratic and 25 Republican governors next year. (The results in Georgia and Florida remain too close to call.)

Democrats also reduced the number of states where Republicans control the executive and both legislative houses. Before Tuesday, Republicans held the entire legislative and executive branches in 25 states, Democrats had full control in just seven, and 17 states had divided government (Nebraska has a unicameral non-partisan legislature). Come January, Republicans will fully control 20 states (excluding Georgia and Florida), Democrats will run 14, and 13 will be divided.

In all states with divided government (except Minnesota), one party will control the governorship and the other will be in charge of both houses of the legislature. For example, blue states Maryland and Vermont will still have Republican governors and Democratic legislatures while red state Kansas will have a Democratic governor and Republican control of both legislative houses. The Maryland, Massachusetts, Vermont and Kansas legislatures have a veto-proof majority. Minnesota has a Democratic governor and control of the house, with Republicans keeping control of the Senate. This is the first time in 104 years that only one state has a divided legislature. 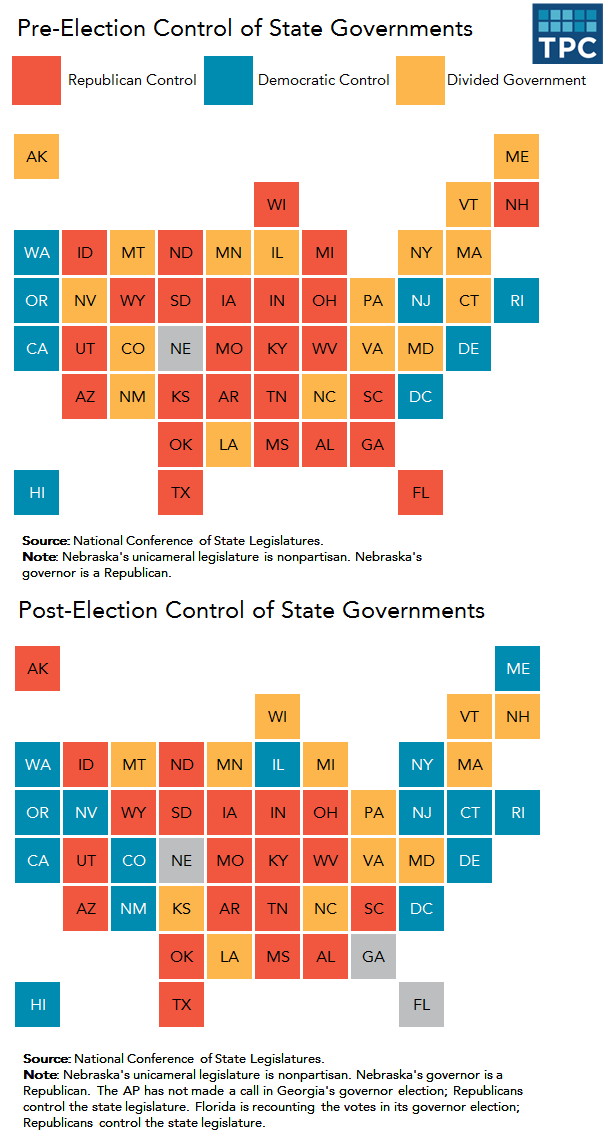 These changes will have a wide range of consequences.

One big political change: Full control of state government gives a political party a very large say over redistricting and drawing the legislative boundaries. Following the 2010 census, many states with one-party control -- Republican and Democrat -- drew electoral maps that helped protect their advantage in state and national races. After the 2020 census, lawmakers in divided states will be more likely to draw consensus maps, though they still may protect incumbents of both parties.  An additional incentive: Voters in at least three states--Michigan, Missouri and Colorado-- approved ballot measures to set up non-partisan commissions to redistrict.

Party control also affects fiscal decisions.  Megan Randall, Aravind Boddupalli, and I found that states with Republican control were less likely to close unexpected budget deficits than states with divided control or unified Democratic control. Republican-controlled governments bridged only 16 percent of their deficit gaps, cutting spending by $14 per $100 of unexpected deficit and raising the following year’s taxes by only $2.

By contrast, Democratic or divided government closed about 60 percent of shortfalls, half through cutting spending during the year and half through raising taxes the following year. While most states have balanced budget requirements, these do not force lawmakers to address budget imbalances.  In some states, lawmakers need only propose a balanced budget and others allow legislatures to fudge the fiscal rules.  Many states also can use rainy day funds to close budget gaps, switch money between accounts, or push the budget imbalance problem into the future.

So the election results seem likely to increase state fiscal responsibilities on average. And to the extent there are future budget shortfalls, history suggests that the new pattern of party control will likely lead states to respond to them faster. This may be good news for residents and taxpayers in the long run.