On CNBC this morning, President-elect Donald Trump’s pick to head the Treasury Department, Steven Mnuchin, described a very interesting tax plan. However, it bears little resemblance to any of the multiple plans that Trump proposed during the campaign.

For instance, Mnuchin said, “Any reductions we have in upper-income taxes will be offset by less deductions, so there will be no absolute tax cut for the upper class.” I don’t know what Mnuchin means by the upper class. However, the Tax Policy Center estimates that under Trump’s most recent plan, the average net tax cut for the highest income 1 percent of households (those making $700,000 or more) would be $215,000 in 2017. The top 0.1 percent, who make north of $3.7 million, would enjoy an average tax cut of more than $1 million, boosting their after-tax income by 14.2 percent.

At the same time, Mnuchin implied that the bulk of Trump’s tax cuts would go to middle-income households. Asked if “the lion’s share of the tax cuts go to the wealthy,” Mnuchin replied, “Well, that’s not the case at all. There will be big tax cuts for the middle-class.”

However, TPC estimated that while middle-income households--those making between $48,000 and $83,000—would get a tax cut under Trump’s last campaign plan, it would be relatively modest. It would average about $1,000 in 2017, or about 1.8 percent of their after-tax income. 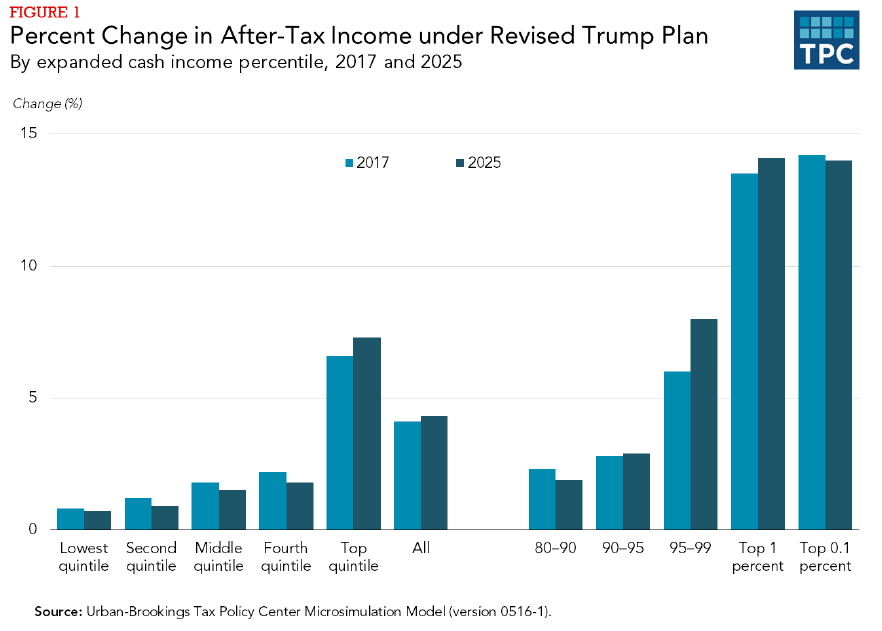 Because Trump’s plan would include big tax cuts for business—and Mnuchin insisted that would not change—it inevitably will cut taxes for the rich, who own those businesses.  It is hard to imagine how high-income households would not receive an outsized benefit from Trump’s business tax cuts.

Mnuchin did seem to walk back the effects of Trump’s plan on some low- and middle-income households. TPC found that while the Trump campaign plan would cut taxes for every income class on average, some people would pay more under his plan than they do today. Among the losers: Single parents with children, families with large numbers of kids, and even some higher income childless singles.

Asked about this problem, Mnuchin replied, “Yeah, we don’t believe in that analysis.” But then he suggested the plan might change anyway: “So, you know, when we work with Congress and we go through this, it’ll be very clear this is a middle income tax cut.”

Finally, Mnuchin seemed to imply that higher revenues from individuals would finance business tax cuts. He said, “So we think by cutting corporate taxes, we’ll create huge economic growth and we’ll have huge personal income, so the revenues will be offset on the other side.”

It is hard to know if he means fully or partially offset. But TPC found that, even accounting for the macroeconomic effects of Trump’s campaign tax cut cuts, the president-elect’s plan would add $7 trillion to the federal debt over the next decade.  If Mnuchin is in fact suggesting the tax plan would not add to the debt, that suggests massive changes to what Trump has so far proposed.

Trump’s remarkable malleability on tax policy makes it hard to keep up. He proposed three very different plans during the campaign—one for the primaries and two others for the general election. Now, one of his top economic advisers is implying that it all may change again, and in profound ways. I await Trump 4.0.

Steven Mnuchin, President-elect Donald Trump's nominee for Treasury Secretary, gets on an elevator after speaking with reporters in the lobby of Trump Tower, Wednesday, Nov. 30, 2016, in New York. (AP Photo/Evan Vucci)