If you'd like to take a break from the made-for-TV thrills of the Republican convention, TPC has prepared a series of bite-sized explanations of Donald Trump's tax plan. We'll be running them daily while the GOP is gathering in Cleveland. Next week, when Democrats are having their get-together in Philadelphia, TPC will do the same for Hillary Clinton.

Presumptive Republican presidential nominee Donald Trump’s tax plan would slash taxes for individuals and businesses. Trump would quadruple the standard deduction to $50,000 for couples ($25,000 for singles) and collapse the current seven individual income tax brackets, which range from 10 percent to 39.6 percent, into three: 10, 20, and 25 percent. That would cut the top tax rate 14.6 percentage points, or more than a third. 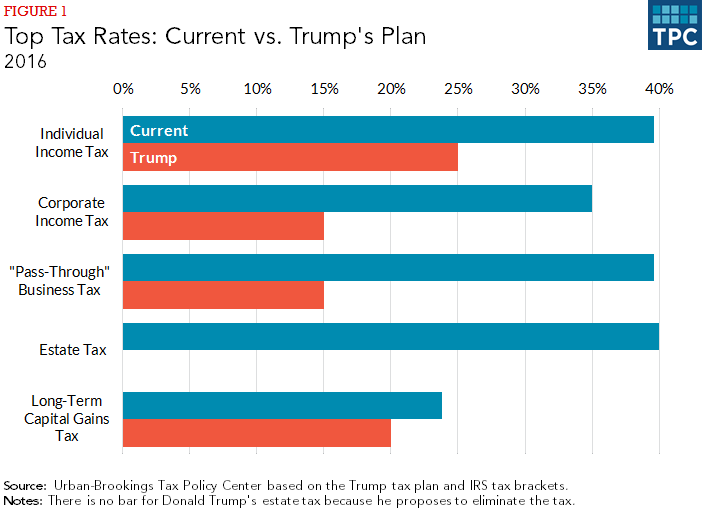 Trump would cut the top corporate income tax rate by more than half from 35 percent to 15 percent (one of many differences between his business tax plan and the one proposed by House Republicans.) Notably, Trump would also cut the top rate for “pass-through” business income to 15 percent.  Currently, owners of pass-through firms, such as partnerships, pay individual income taxes at rates of up to 39.6 percent. Lowering this rate would likely encourage many taxpayers to avoid tax by reclassifying themselves as “independent contractors.”

Trump would repeal the alternative minimum tax, the estate tax, and the Affordable Care Act’s 3.8 percent investment tax (so long-term dividends and capital gains would face a top rate of 20 percent). He’d preserve deductions for mortgage interest and charitable giving but cap the value of most other individual tax deductions. He’d leave payroll taxes unchanged.