This week, the Trump Administration said it would ask Congress for big increases in defense spending which it would finance by slashing some domestic programs. While we don’t know what spending cuts the president will propose—and may not know for weeks or months—we can be sure of something else: The spending plan Trump aides described this week will never pass Congress, not even one where both chambers are controlled by Republicans.

The reason: By imposing spending cuts on only about one-seventh the federal budget, he would effectively dismantle programs, many of which have strong support in Congress including among Republicans. At the same time, by protecting entitlement programs such as Medicare and Social Security, he’ll antagonize conservatives.

The White House’s fiscal signals have been muddled and even contradictory. Early in the week, Budget Director Mick Mulvaney said Trump would boost defense spending $54 billion and pay for it by reducing a slice of domestic spending by the same amount. Even those numbers are a bit uncertain. Defense experts say Trump would boost Pentagon spending by only about $20 billion, or 3 percent of the defense budget. Then, yesterday, Trump suggested that he may not need to cut programs at all and instead could finance new defense spending with a burst of economic growth.

Without more information, it is impossible to know exactly how much Trump would cut or where, but let’s take him at his word and assume he means it when he ways he’d slash those domestic programs by $54 billion in one year.

Here is the math that will eventually confound the president:

Trump is not talking about cutting all non-defense spending. He says he’d exclude Social Security and Medicare (and possibly Medicaid). He also says he’ll boost spending for homeland security, a border wall, infrastructure, and other programs. So what’s left?

Take a look at this table: 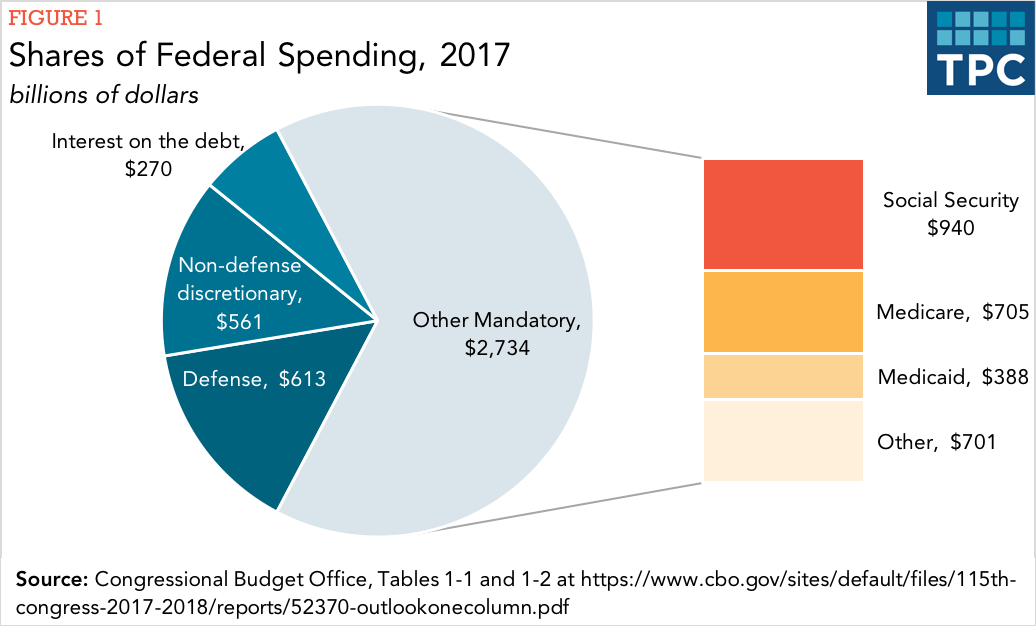 The piece of the budget Trump would target, known inside the Beltway as non-defense discretionary spending, is the smallest chunk of non-interest federal spending—about $561 billion or 14 percent of all spending . What’s in this pot? Most everything people think of as government services: everything from federal highways, air traffic control, the national parks, the National Institutes of Health, support for communities recovering from fires and floods, the Department of Homeland Security, the federal justice system, agriculture, the Centers for Disease Control,  and Meals on Wheels. It also includes foreign aid.

Carve out the programs Trump says he’ll protect or expand and he’s implying a cut in the remaining programs of more than 10 percent.  Ten percent may not sound like much, but it is a huge amount of money for programs whose budgets have effectively been frozen for years. Worse, population growth and inflation inevitably eat into those resources.  Cuts of that size would make it tough for those programs to operate effectively.

Then there is Trump’s other budget problem. If Congress trims these programs to pay for increases in defense spending, those dollars will no longer be available to fund his proposed tax cuts. It appears highly unlikely that his oft-promised tax plan will pay for itself. TPC estimates that his most recent plan would increase the debt by $7 trillion over 10 years, including its effects on the overall economy (dynamic scoring) and added interest costs.  While the president provided no new details in his speech to Congress last night, he seemed prepared to charge ahead on those tax cuts: “It will be a big, big cut,” for businesses and “massive tax relief for the middle class.”

Trouble is, Trump could completely eliminate all programs in the non-defense pot of discretionary spending and he’d still fall hundreds of billions of dollars short of paying for all the tax cuts he promised in the campaign.

The Administration is not likely to provide any real details for months. The White House says it will release a budget summary in mid-March and a full budget sometime in May. But Trump’s plan is already running into potholes on Capitol Hill.

Some Republicans like the idea of deep spending cuts, but want to include programs such as Medicare and Social Security. Others worry about the effects of domestic spending reductions on their constituents or the effects of cuts in foreign aid on international relations. And Democrats are likely to be united in opposition to these proposals.  No matter what cuts Trump suggests, when it comes to specific dollars for specific programs, Congress will have the last word.

Trump will have little trouble convincing Congress to increase military spending. But he’ll have less success selling the kind of narrow but deep spending cuts he is signaling. That means more pressure on the deficit, especially in future years. And that, in turn, may make enacting a big tax cut even more challenging.