When President Trump announced his latest tax outline, he called for new individual tax rates of 10-25-35 percent. But he left out a critical detail: Where each tax bracket would begin and end.  And that feature can be enormously important to the cost of those rate cuts and their distribution among households of different incomes.

To see just how important, I asked the Tax Policy Center’s Philip Stallworth to model two hypothetical options. First, he used the brackets Trump described in his final campaign plan. Then, he ran the same rates for brackets that begin and end at twice those taxable income levels.  He also assumed that the Alternative Minimum Tax is repealed as Trump has proposed. To keep it simple, he assumed the rest of the tax code did not change.

Taxable income is adjusted gross income (basically all income subject to tax) minus personal exemptions and either itemized deductions or the standard deduction. The brackets would look like this for single filers in 2018: 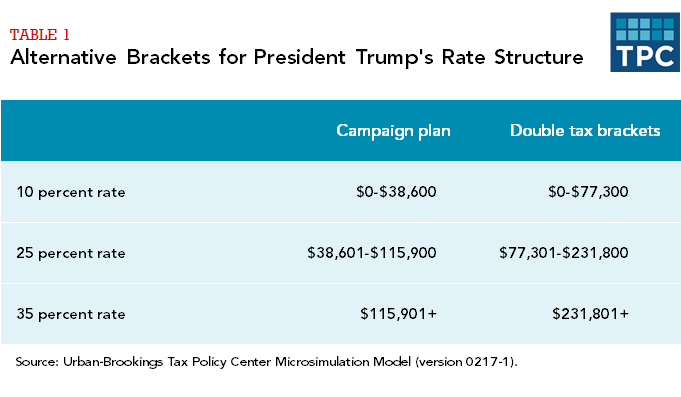 The result: By doubling the brackets, Trump would boost the cost of his rate cuts from $165 billion in 2018 to $428 billion. And most of the extra benefit would go to upper-income households.

What would happen if the brackets are doubled?  The average tax cut would nearly triple to $2,800. The wider brackets wouldn’t affect the tax bills for the bottom 40 percent of households. But tax cuts for middle-income households would be half-again as large as with the narrower brackets. They’d get an average tax cut of $1,100 or 1.9 percent of after-tax income.

However, for the top 1 percent, the average tax cut would increase from $39,000 to $70,000. One reason: While 85 percent of them would get a tax cut under Trump’s campaign brackets, 97 percent would get one if the brackets are doubled.

The top 0.1 percent would also benefit, but not by as much. Their average tax cut would increase from $215,000 to $244,000. High-income households would receive larger tax benefits from the wider brackets because that first $231,800 (for singles) would be taxed at the lower rates.

To be clear, I am not suggesting that either of these alternatives is Trump’s current plan. He could as easily collapse the income tax brackets rather than widening them, creating something that looks more like a flat tax. Or he could widen the brackets even more. But it is instructive to see how big an effect changes in brackets can have. That’s why income tax rates alone don’t tell us much. And why it is so important for the president to disclose what income brackets he'd attach to his rates.