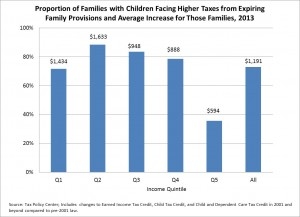 Toppling Over the Fiscal Cliff Could Cost Low-Income Families $1,000 in Reduced Tax Credits

If left in place, in 2013 families with children would see over $43 billion in benefits from these provisions. But  absent Congressional action, these expanded benefits will disappear over the cliff. Should the EITC, CTC, and CDCTC revert to their pre-2001 form, the Tax Policy Center estimates nearly three-quarters of all families with children will see their taxes rise or net rebates decline by an average of almost $1,200, compared with what they would pay if the provisions were extended. Keep in mind  those changes would be in addition to  the broad tax hikes that would  affect nearly all working families such as  the expiration of the payroll tax cut  and any increase in marginal tax rates for all families with income above the tax entry thresholds. 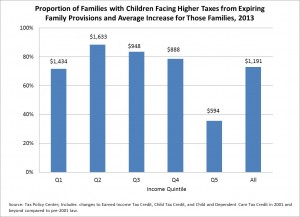 If Congress and  President Obama can reach a deal (either before or after January 1), it’s likely to include an extension of the doubled CTC, higher income cut-offs for married couples claiming the EITC, and the increases to the CDCTC.  This would preserve these benefits for most families.  But  the fate of other provisions, such as the reduced refundability thresholds for the CTC and the increased EITC for families with at least 3 children, are much less clear. For instance, neither is included in the  House Republican Budget Plan. Those provisions deliver the lion’s share of benefits to those in the lowest income households.

Today, we still don’t know how the ongoing budget debate will end.  But the debate thus far leaves the most vulnerable families quite close to the edge.